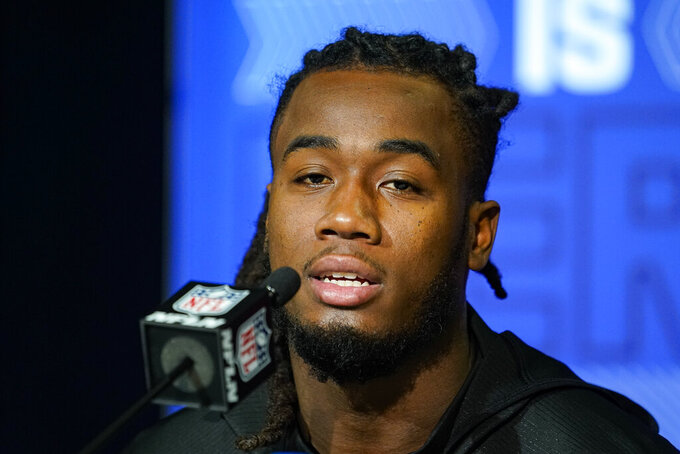 He sees a promising group of skillful, multi-faceted players, more than one worthy of being a first-round draft pick in April. Walker, in fact, could be at the head of the class following his 2021 breakout season at Michigan State, especially if he tests well between now and then.

The problem: Many teams find more value waiting to take a running back. So Walker and nearly three dozen other runners will spend this week trying to change minds at the NFL's annual scouting combine in Indianapolis.

“I feel like that's a goal in my mind, to be drafted early," Walker said Thursday. "And also just for other running backs as well, I feel like we've got to get them off the board, too."

Convincing scouts to change their ways won't be easy.

With this year's draft heavy on big guys — offensive and defensive linemen — and receivers, it appears light on the splashy, offensive playmakers out of the backfield. Even the quarterback class has been criticized for its lack of star power.

Yet, as much as coaches want to talk about winning championships by running the ball and stopping the run, it's the backs who have taken the biggest hits on recent draft weekends.

Only four have been taken in the first round over the past three seasons, and only twice during the last nine years have four or more been selected among the top 50. While some believe this year's class is solid and deep, it also could be the first time since 2014 and the second in 22 years that no running back is a first-rounder.

“I love this running back group," NFL Network analyst Daniel Jeremiah said last week. “Again, I don’t think there’s going to be one that goes in the first round. I was talking with a personnel director the other day and he said, ‘Let’s just circle the fourth round.' You’re going to get a great back in the fourth round, especially if you want a bigger back."

That's a significant departure from not long ago when top-10 picks were used on Todd Gurley, Ezekiel Elliott, Leonard Fournette and Saquon Barkley in four successive drafts starting in 2015. Since then, though, no back has been selected higher than 24th.

It's unlikely the trend changes this year despite a wide-ranging group of prospects.

Walker finished as last season's top rusher with 1,646 yards, 15th in yards per carry (6.22) and tied for eighth in touchdown runs (18). Jeremiah thinks Walker runs more powerfully than his listed weight of 210 pounds suggests, and Walker's goal is to run the 40-yard dash in 4.4 seconds at Indy.

But he's not even Jeremiah's top-rated back.

That title belongs to Isaiah Spiller of Texas A&M, who posted back-to-back 1,000-yard seasons in 2020 and 2021 and also made 74 receptions over three seasons.

All want to prove they can play three downs in the NFL and are capable of becoming multi-dimensional players such as Deebo Samuel and Cordarrelle Patterson.

“Those guys are really unique because they can play wide receiver or running back, and I feel like with them you never really know what they’re going to do because they can do so many different things," Hall said. "I feel like if every running back was like that, then the game would be better as a whole. But those guys are really elite athletes and they’re one of a kind.”

It's not only running backs who have something to prove.

The quarterbacks, who began working out Thursday, have neither a clear frontrunner to be the first off the draft board nor anyone expected to go in the top five overall picks.

“There's a chip on all our shoulders because they're saying this class is not as good," Cincinnati quarterback Desmond Ridder said. “But you're going to see a lot of success out of us."

The running backs follow a similar mantra, one they believe will pay off — if given the chance.

“This class is like great," White said. “These guys are real good, they're real cool guys, they're smart and they play some good football, really all of them."