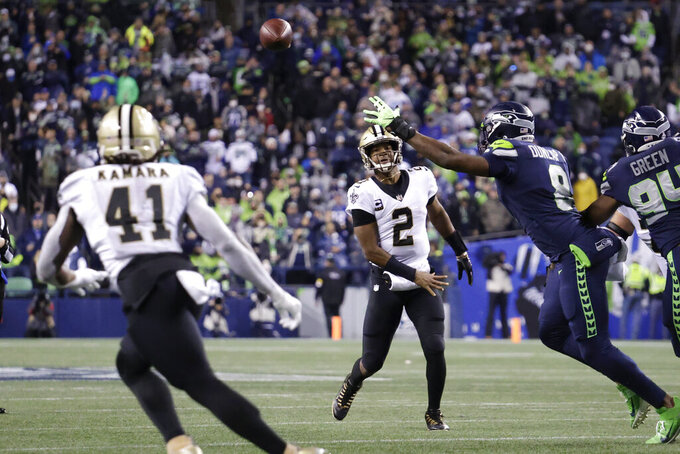 New Orleans Saints quarterback Jameis Winston (2) passes to running back Alvin Kamara (41) for a touchdown against the Seattle Seahawks during the first half of an NFL football game, Monday, Oct. 25, 2021, in Seattle. (AP Photo/John Froschauer)

NEW ORLEANS (AP) — When the New Orleans Saints keep trying different ways to get the ball to dynamic running back Alvin Kamara, chances are he'll eventually do something that turns a game in their favor.

The Seattle Seahawks placed an emphasis on keeping Kamara in check as a runner — a sensible strategy in wind-driven rain that made throwing the ball difficult on Monday night.

Indeed, most of the Saints' available receiving targets didn't consistently produce in a game that saw six New Orleans possessions end in punts and one with a fumble by New Orleans tight end Adam Trautman.

“AK — he's a creative player and he's amazing,” left tackle Terron Armstead said Tuesday after reviewing video of New Orleans' victory in Seattle. "Everything that he's able to do, it's impossible to shut him down.

“He's the offense. So, all eyes on AK. He still finds ways to produce,” Armstead added. “He just does whatever's asked of him and there's still so many more things to unlock with him and unlock through this offense.”

Kamara also received praise from coach Sean Payton for the way he improvised in real time on his touchdown catch by altering the short pass route the play had called for him to run.

“He was smart enough to read” the coverage, Payton said. “Alvin's got real, real good football savvy. ... Rather than mindlessly running out to the flat, then coming back in, he abbreviated that and sat (in front of soft zone coverage) and presented a real easy target for the QB.”

Not a lot went right for New Orleans' offense in Seattle. The Saints might have lost if not for two missed field goals by the Seahawks.

In the end, Kamara's performance helped the Saints (4-2) earn a second straight victory.

The Saints have maintained one of the top run defenses in the NFL for several seasons and haven't seen a drop-off despite offseason departures of defensive tackles Sheldon Rankins and Malcom Brown, and the six-game suspension of fellow tackle David Onyemata. New Orleans limited the Seahawks to 90 yards rushing and currently rank third in the NFL in yards rushing allowed per game at 80.8.

Now Onyemata's suspension (for a performance-enhancing drug violation) is over, which should only boost New Orleans' defensive line.

“It’s been one of the strengths of our team," Payton said. “We've defended the run well. It helps when you get an opponent one-dimensional.”

The Saints rank 31st in yards passing per game with 176.2. That's a far cry from the video game-like offenses the Saints have had since hiring Payton in 2006; they’ve ranked in the top 10 in the NFL in passing in 13 of the previous 15 seasons and first six times.

“We didn’t play last night at receiver as I would have hoped,” Payton said. “It’s a work in progress. We’ll continue to grind on it.”

“He did a good job — fantastic in conditions like that," Payton said. "He was outstanding. I was really proud of him. He got a game ball ... It’s a tough place to kick and he was more than ready.”

The timing of Johnson's performance could not have been better. It not only came during a game when his field goals were the difference in the victory, but also the day before injured Saints kicker Wil Lutz announced on social media that he's had a setback in his rehabilitation and won't return this season.

Veteran receiver Tre'Quan Smith suited up for the first time this season and the Saints hoped his return would improve their anemic passing offense. He had one catch for 11 yards and could be seen having a shouting match with quarterback Jameis Winston on the sideline after an apparent mix-up.

Saints starting left guard Andrus Peat left Monday night's game with a pectoral injury. Lutz was the Saints' only place-kicker for the previous five seasons and had just been designated last week to return from New Orleans' injured reserve list before announcing his setback. It's also unclear when reserve QB and utility player Taysom Hill will be ready to return from his Week 5 concussion. Returner and receiver Deonte Harris also sat out Monday with a hamstring injury that has lingered for a couple of weeks.

1 — The total number of interceptions Winston has thrown during the Saints' four victories this season. He threw two in their loss at Carolina and has thrown three in six starts this season. In his previous season as an NFL starter with Tampa Bay in 2019, Winston threw an NFL-high 30 interceptions.

The Saints return Sunday to the Superdome to host NFC South leader and defending Super Bowl champion Tampa Bay, which comes in on a four-game winning streak. It'll mark Winston's first start against the team with which he spent his first five NFL seasons.