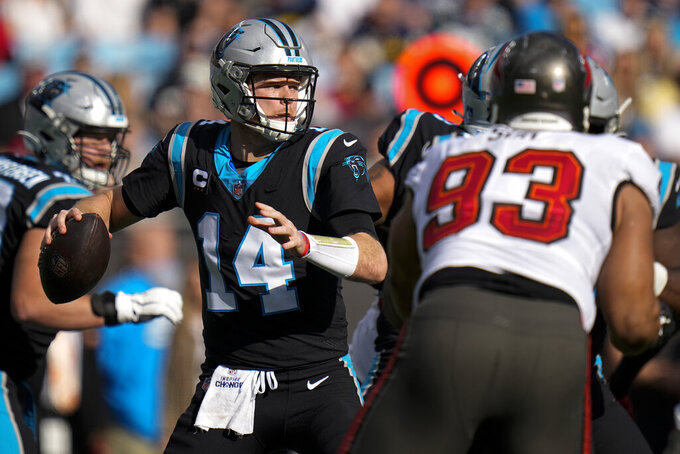 BETTING LINE: Saints by 6½, according to FanDuel SportsBook.

TURNOVER DIFFERENTIAL: Panthers minus-9; Saints plus-2.

PANTHERS PLAYER TO WATCH: QB Sam Darnold threw for 305 yards and two touchdowns with a QB rating of 99.1 in the last meeting in Week 2. Darnold missed five games with a shoulder injury but returned last week to split reps with Cam Newton. The Panthers have more than $18 million invested in Darnold next season, so they want to take another look before making any decision about their future at quarterback.

SAINTS PLAYER TO WATCH: DE Cameron Jordan has had two sacks in each of the past two games and has eight sacks in his last nine games.

KEY MATCHUP: Saints RB Alvin Kamara vs. the Panthers' front seven. Kamara was held to 5 yards rushing on eight carries and had four receptions for 25 yards in the last meeting. But Kamara remains the Saints' best offensive player and the Carolina defense has struggled mightily in the second half of the season. Carolina is 21st in the league against the run, allowing 118.5 yards per game on the ground.

KEY INJURIES: The Panthers will be without starting cornerback Stephon Gilmore (groin), the NFL’s Defensive Player of the Year in 2019 with the New England Patriots. It’s expected rookie Keith Taylor will start at cornerback alongside C.J. Henderson. Saints FS Marcus Willaims has been placed on the club’s COVID-19 reserve list this week but more than 10 players have returned from that list to the active roster this week, including QB Taysom Hill and LB Demario Davis. LT Terron Armstead and RT Ryan Ramzcyk are trying to come back from knee injuries. WR Tre'Quan Smith has a chest injury.

STATS AND STUFF: The Panthers have lost 10 of their last 12 games... Carolina is 3-4 on the road this season. ... QB Sam Darnold is 4-5 as the team’s starter. ... Darnold replaces Newton, who has lost his last 13 starts as a Panthers starter dating back to 2018. Newton will be the team’s backup QB but it’s unclear if he will play. ... RB Chuba Hubbard was held to 9 yards rushing last week by Tampa Bay. ... D.J. Moore is one of three NFL receivers with 1,000 yards receiving in each of the last three seasons. Stefon Diggs and Tyler Lockett are the others. ... LB Haason Reddick had 1 ½ sacks in a Week 2 win over the Saints. ... DE Brian Burns has four sacks in four career games vs. the Saints. ... S Jeremy Chinn leads all DBs with 219 tackles since 2020. ... In seven career starts at QB, all with the Saints, Hill is 5-2 with 12 TDs (six passing, six rushing) vs. six INTs. ... Kamara is one of two running backs in NFL history (Roger Craig) with more than 4,000 yards rushing and 3,000 yards receiving in his first five seasons. ... WR Marquez Callaway had 46 yards receiving last week and has career highs for receptions (40), yards receiving (601) and TDs receiving (six) this season. ... WR Lil’Jordan Humphrey led the team with 70 yards receiving last week. ... Jordan last week became the fourth NFL player since 2000 (along with Jared Allen, Robert Mathis and Julius Peppers) with at least seven sacks in 10 straight seasons. ... DE Marcus Davenport has a career-high 7 1/2 sacks in 2021

FANTASY TIP: With the Saints' defense playing well lately, chances are Kamara will be among the most productive offensive players in the game against a Carolina defense that has been good against the pass but has struggled against the run.