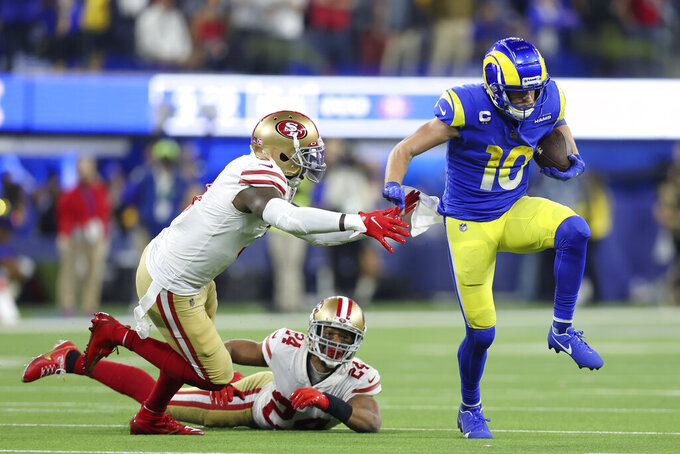 INGLEWOOD, Calif. (AP) — Jaquiski Tartt made game-winning baskets and game-clinching interceptions in high school and college. What the San Francisco 49ers safety couldn't do was come up with the biggest play to get his team back to the Super Bowl.

Tartt dropped an interception with the Niners hanging on to a 17-14 lead during the fourth quarter of Sunday's NFC championship game against the Los Angeles Rams. It was one of many players San Francisco was unable to make in the final 15 minutes in a 20-17 loss that denied the 49ers their second Super Bowl trip in three years.

“The moment of truth showed up and I didn't step up,” Tartt said. “In practice all week I caught everything that came my way. You practice for a moment like that and the only moment when you get it, it doesn't happen.”

For 6 3/4 games, the Niners had dominated their NFC West rival. But then everything unraveled in the fourth quarter. They had a 17-7 lead entering the final 15 minutes but saw the Rams score 13 straight points.

Besides Tartt's dropped pick, coach Kyle Shanahan decided not to go on fourth-and-2 in Rams territory after they fell short on two previous short yardage plays and Jimmy Garoppolo was intercepted on the final drive.

“Both teams had their opportunities," Shanahan said. "I thought we had them on the ropes, but we gave them a chance. When you give those guys too many chances, eventually they are going to make them.”

Rams coach Sean McVay appeared to provide Shanahan a gift when he challenged a third-and-2 play on which McVay thought Kyle Juszczyk fumbled instead of being held for no gain. Replays showed Juszczyk lost the ball after being down by contact, which left the Rams with no timeouts.

Instead of seizing momentum and going on fourth-and-2 at the Rams 45 with a 17-14 lead, Shanahan decided to punt after taking a delay-of-game penalty.

Shanahan didn't even consider going on fourth down. The play he said he wished he had back on that drive was second-and-1 at the Rams 44 when Elijah Mitchell was stopped by Rams safety Eric Weddle for a 1-yard loss.

“On those three plays we had our opportunities and we didn't come through. After that it changed into a game we ended up not liking too much,” Shanahan said.

As bad as Shanahan’s decision was, Tartt’s dropped interception on the ensuing play was worse. From the Rams 15, Matthew Stafford's long throw came directly to the seventh-year safety who had no one around him on a 50-yard pass. Tartt dropped it.

“I was thinking when he threw it ‘oh yeah, he (screwed) up’ and we were going to win this game. And it hit my hands. I thought I had it again, but I dropped it," Tartt said.

On the next play, Stafford found Odell Beckham Jr. for a 29-yard completion up the left sideline, along with 15 additional yards when Jimmie Ward was called for unnecessary roughness. Matt Gay hit a 40-yard field goal seven plays later to tie it at 17.

After Gay’s second field goal gave the Rams the lead, the Niners had a final chance to win or tie. Garoppolo was pressured by Aaron Donald on third-and-13 from the Niners 22 before being picked off by Travin Howard.

The Rams had their second trip to the Super Bowl in four years.

“Some bad execution. It just didn’t work out the way we wanted to,” said Garoppolo, who completed 16 of 30 passes for 232 yards with two touchdowns and an interception.

Los Angeles also becomes the second team to host a Super Bowl in its home stadium after the Tampa Bay Buccaneers made history last year. The Rams will face the Cincinnati Bengals, who advanced with a 27-24 overtime victory over the Kansas City Chiefs in the AFC championship game.

Besides the failure to execute in the fourth quarter, the Niners struggled to stop Rams All-Pro wide receiver Cooper Kupp ,who had 11 catches for 142 yards and two TDs. San Francisco often had single coverage on Kupp, including an 11-yard touchdown in the fourth quarter when K’Waun Williams got beaten off the line.

San Francisco's defense also couldn’t get off the field on third downs as the Rams converted 11 of 18.

The Niners were 3-5 at midseason before winning seven of their last nine and getting into the playoffs as the NFC's sixth seed. They upset Dallas and Green Bay on the road, but took their first loss to the Rams to 2018.

San Francisco has many questions going into the offseason, including if Garoppolo will remain under center.

“It was a roller coaster of a year. It really was," Garoppolo said. "Good teams are resilient teams. They fight through things that come up and finish on the better end of it.”