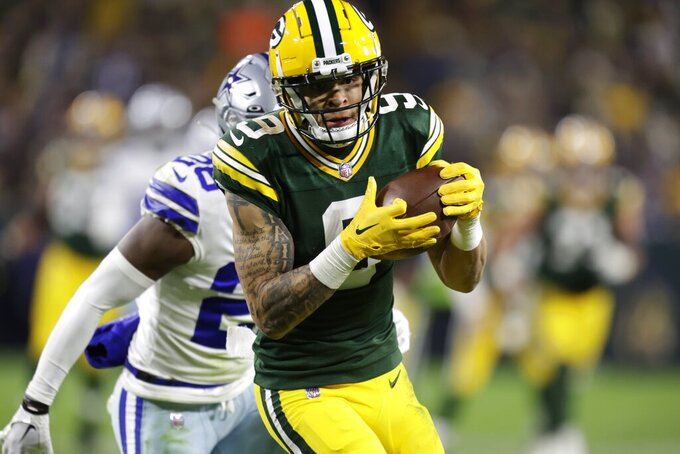 He simply didn't have time.

LaFleur had to start preparing as soon as possible for a Thursday night game with the Tennessee Titans as the Packers try to recover from a five-game skid that damaged their playoff hopes.

“It’s a good thing there’s a couch in my office,” the Packers coach said Monday.

The NFL schedule offers the Packers (4-6) little opportunity to celebrate their 31-28 triumph, which came after they rallied from a 14-point deficit in the fourth quarter. Of course, the AFC South-leading Titans (6-3) are facing a similarly quick turnaround after beating the Denver Broncos 17-10 at home on Sunday.

At least the Packers, unlike the Titans, don’t have to worry about travel taking up some of their valuable preparation time.

“We have the advantage this week with the short week at home,” quarterback Aaron Rodgers said after the Cowboys game.

The Packers can’t afford any letdown because their prolonged slump has left them with little margin for error as the three-time defending NFC North champions attempt to return to the playoffs.

Winning a fourth straight division title seems like a major long shot. The Packers are 4½ games behind the NFC North-leading Minnesota Vikings (8-1).

But a late push could enable the Packers to at least contend for one of the NFC’s three wild-card berths. Green Bay is just 1½ games behind the San Francisco 49ers (5-4), who would have the NFC’s final wild-card spot if the season ended today.

The Packers’ rally Sunday showed that some players are ready to play bigger roles in a potential late-season surge.

But the Packers also got a big performance from Rudy Ford in his first start of the season. The Packers signed Ford just before the season because they believed his skills as a gunner would boost their special teams. But he made a major contribution on defense Sunday with two long interception returns that set up the Packers’ first two touchdowns.

“I thought he did an outstanding job,” LaFleur said. “You could really feel his speed and physicality out on the field.”

The Packers showed plenty of balance on offense by passing for 224 yards and rushing for 207. Watson’s emergence enabled Rodgers to have more success throwing downfield. ... The Packers got two sacks and six hurries even without team sacks leader Rashan Gary, who’s out for the rest of the season with a knee injury. Jarran Reed made one of the game's bigger plays when he pressured Dallas' Dak Prescott into a fourth-down incompletion in the first possession of overtime.

Watson was the first Packers rookie to have 100 yards receiving and three touchdown catches in a single game since Hall of Famer James Lofton in 1978. … Ford tripled his career interception total. Before Sunday, Ford had one career interception in 65 games. … RB Aaron Jones rushed for 138 yards and one touchdown. In three career games against Dallas, Jones has totaled 62 carries for 370 yards and six touchdowns plus 10 catches for 102 yards.

WR Amari Rodgers fumbled a punt return to set up a Cowboys touchdown. Keisean Nixon handled the punt-return duties for the rest of the game. LaFleur and special teams coordinator Rich Bisaccia wouldn’t say Monday who will return punts against the Titans.

The Packers suffered no major injuries Sunday, but they placed Gary and CB Eric Stokes on injured reserve last week. Neither is expected to play again this season. LaFleur said it was too early to tell whether LB De’Vondre Campbell (knee) or WR Randall Cobb (ankle) would play Thursday. Cobb has missed Green Bay’s last four games and Campbell has sat out the last two contests.

30/400/200 — This was the first time the Packers accumulated 30-plus points, 400-plus total yards and 200-plus yards rushing since a 40-14 victory over the Titans on Dec. 27, 2020. The Packers have won the last 40 regular-season games in which they’ve reached those totals. The last time they reached all three of those benchmarks but lost a regular-season game was Oct. 8, 1950, against the New York Yanks.

The Packers continue arguably the most difficult portion of their schedule by hosting the Titans on Thursday. They visit the Philadelphia Eagles on Nov. 27.