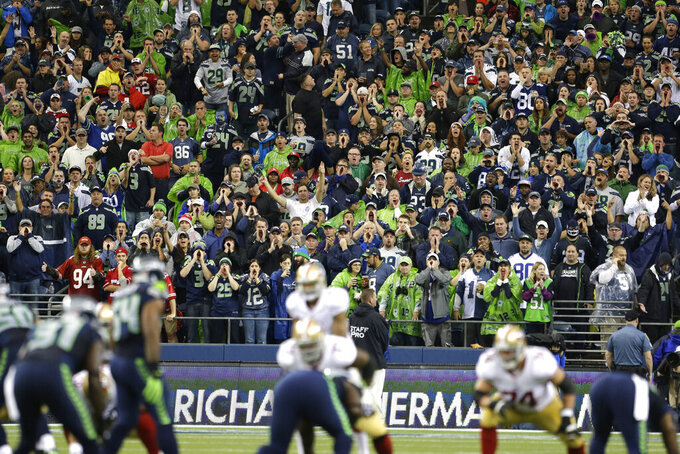 FILE - In this Sunday, Sept. 15, 2013, file photo, Seattle Seahawks fans yell during a San Francisco 49ers possession in the first half of an NFL football game in Seattle. Fans were attempting to set a Guinness World Record for fan noise. One of the best homefield advantages in the NFL will sit empty on Sunday night, Sept. 20, 2020. . The Seattle Seahawks know it will be strange having no fans inside CenturyLink Field. But being an opponent in Seattle has gained such a reputation even some Patriots are disappointed there won't be fans. (AP Photo/Elaine Thompson, File)

RENTON, Wash. (AP) — For a normal Sunday night game in Seattle, the fans would start showing up in the morning, giving themselves plenty of time to find parking and begin their preparations for the evening’s festivities.

Those parking lots will be empty this Sunday. No tailgates. No party buses. No fans. CenturyLink Field, a venue designed for maximum noise and regarded as one of the best homefield advantages in the NFL, will sit empty when the Seahawks host the New England Patriots.

Because of the COVID-19 pandemic, Seattle will not be able to have fans in the seats vs. New England, or on Sept. 27 vs. Dallas and or Oct. 11 vs. Minnesota. Instead of the deafening roars that have caused seismic activity in the past, controlled background noise will be piped in.

“This is one of the great spectacles in sport, playing here in front of our fans. Notably the loudest venue that you can find. The excitement level and the energy and the connection with the people of this area has been unique and extraordinary, nothing but a spectacle. That’s not going to happen,” Seattle coach Pete Carroll said.

“But that doesn’t mean that when we score or something, make a big play, sack the quarterback, people can’t go out on their front steps and start screaming, yell out their windows. I’m hoping that’s what happens.”

Seattle’s home-field advantage is real. The Seahawks are 63-23 at home in the regular season and playoffs combined since Carroll arrived in 2010. Going back to when the stadium opened in 2002, the Seahawks are 109-46.

Good players, good coaches, good teams are certainly the main reason. But the fans have helped.

“There have been games when we played the 49ers where you can’t hear yourself, and we’re standing right next to each other, because the crowd is so loud,” linebacker Bobby Wagner said. “It just depends who we are playing, the time, but you definitely love it when it’s loud and the offense can’t hear.”

The Seahawks plan to continue several of their fan-related traditions, most notably raising the “12” flag above the south end zone before kickoff. The flag will be raised Sunday by Dr. Eliot Fagley, an anesthesiologist who leads the COVID-19 response in the critical care unit at Seattle’s Virginia Mason Medical Center. It’s part of the team’s season-long effort to honor frontline workers.

Fagley and his family will be the only “12s” in the stands.

QB Russell Wilson previously said he believed the empty stadiums would be similar to his experience playing minor-league baseball in small ballparks. But he also acknowledged the fans' influence in Seattle’s 19-3 home record in prime time games since 2010.

“Every game, every prime-time game when the fans are there, it always makes a difference,” Wilson said.

Despite being the visitors, somehow the ones most disappointed about the lack of fans seem to be the Patriots. New England hasn’t visited Seattle since 2012 when Wilson was a rookie and the Seahawks rallied for a 24-23 victory.

“I’ve been there, where you’re sitting on the sidelines and you’re trying to talk to your teammates about the last series and you’re just screaming at one another, because it’s that hard to hear,” Patriots DB Jason McCourty said. “I think those atmospheres, playing in front of that type of energy, that’s what it’s all about. ... We know they mean so much to the game so they’re definitely missed on game day.”

Added wide receiver Julian Edelman, “I never got to play there. I missed out on a couple trips over there. I actually went to a game, back in like 2004, they went to the playoffs. I went to a playoff game once to experience it. I never got to experience it on the field. The energy of the crowd is a huge part of this game. The fans are a huge part of this. It’s always fun going in, and going to places you don’t necessarily go to as much, and seeing what kind of fan base they have.”