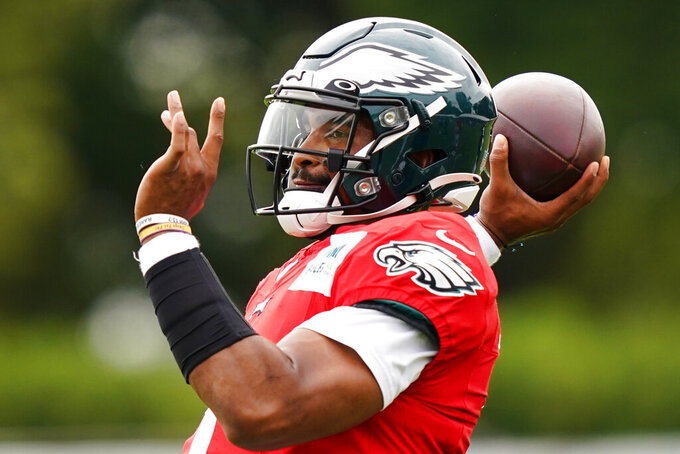 PHILADELPHIA (AP) — First-year Philadelphia Eagles coach Nick Sirianni took pains during the preseason not to give away his plans for the offense and how he will tailor it to the strengths of quarterback Jalen Hurts.

The big reveal will come Sunday when the Eagles open their season on the road against the Atlanta Falcons.

“The quarterback meetings go longer. ... They start earlier, they go longer and that’s just the way it is, and we’re in there the whole time. Part of you, with the quarterback, you have no choice but to grow closer.”

Despite Sirianni's intense focus on the quarterback position, the relatively inexperienced Hurts still has a say in the offense.

If Sirianni, Steichen and Johnson all like something and Hurts doesn't, “we ain't gonna run it,” the head coach said.

Hurts, a second-year player out of Oklahoma and Alabama, started four games for the Eagles last season and became the undisputed starter when Philadelphia traded Carson Wentz to the Colts in the offseason.

He was named a team captain, an honor he said “means the world” and reflects the work he has put in.

Hurts and Sirianni have bonded over football and family. Hurts' father, Averion, is a high school coach in Texas, and Sirianni's brother, Mike, is the coach at Washington & Jefferson College.

“We’ve built a very good relationship in a short time,” Hurts said. He said he and Sirianni are “very similar, in many ways,” including their competitiveness and their sense of humor.

As for the offense, Hurts said that while he has input, it's Sirianni's system, and the adjustments are “more so me seeing it the way he does” than the other way around.

There are plenty of unknowns heading into the season opener. The Falcons also have a first-year coach in Arthur Smith who, like Sirianni, took pains to keep his game plans vanilla during the preseason.

Dean Pees is Atlanta's new defensive coordinator, and Sirianni has studied the way Pees' defenses in Baltimore and Tennessee tried to contain running quarterbacks like Hurts.

“Sometimes you don’t know,” Sirianni said. “So, you have to go — you know, no matter if it’s Jalen or ... Philip Rivers or Andrew Luck, you always try to watch somebody who is like you, right?”

NOTES: Right guard Brandon Brooks (knee), offensive lineman Landon Dickerson (knee), safety Rodney McLeod (knee) and linebacker Davion Taylor (calf) were limited in practice. ... Asked about not having to prepare for wide receiver Julio Jones, now with the Titans, cornerback Darius Slay said Calvin Ridley is a legitimate No. 1 receiver and “one of the best route-runners in the league.”