Some prospects saw their stock slide at combine 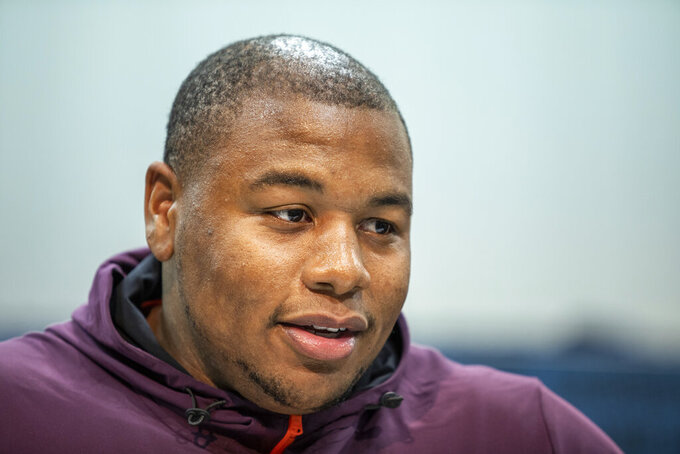 Clemson defensive lineman Dexter Lawrence talks to the media at the NFL Scouting Combine on Saturday, March 2 2019 in Indianapolis. (Detroit Lions via AP)

INDIANAPOLIS (AP) — Many headliners boosted their draft stock at the NFL's annual scouting combine with a wonderful workout, a dazzling 40-yard dash, a brilliant bench press or, in Kyler Murray's case, just standing up straight.

They'll have to do better in their pro days and private workouts ahead of the draft in late April.

One of the biggest disappointments was potential first-round pick Jachai Polite, an outside linebacker from Florida who put up unimpressive numbers in the 40 (4.84 seconds) and vertical jump (32 inches) before ending his workout Sunday with a sore hamstring.

Clemson's hulking defensive tackle Dexter Lawrence strained his left thigh running the 40 and sat out the remaining drills, disappointing scouts eager to see how the 350-pounder performed after missing the College Football Playoff because of a positive test for a performance-enhancing drug.

More disconcerting to teams are the players who can't use injury as an excuse. That group this year included:

—Mississippi left tackle Greg Little. He labored through the on-field drills and posted poor numbers in the 40 (5.33) and vertical jump (25 inches). Those were among the worst for O-linemen and he skipped the bench press altogether.

—Florida Atlantic running back Devin Singletary. The Owls' 5-foot-7, 203-pound playmaker piled up 3,300 yards and 54 touchdowns the last two seasons. But his hopes of shedding concerns about the level of competition he faced took a hit with a disappointing 4.66-second 40-yard dash.

—Georgia running back Elijah Holyfield. His status as one of the few standouts in a rather weak running backs class took a hit when he was clocked in the 40 in 4.78 seconds, slower than the trio of punters and kickers who ran the 40 at the combine. Among running backs, only Wisconsin's Alec Ingold ran slower than Holyfield.

—Georgia wide receiver Riley Ridley. He posted poor numbers in the 40 — 4.58 seconds — and the vertical jump — 30½ inches, which was second worst among wide receivers. Only Fresno State's KeeSean Johnson at 30 inches was worse.

—Texas WR Lil'Jordan Humphrey. Scouts were left wondering if he could win 1-on-1 matchups after he posted a 4.75-second 40, the slowest among wide receivers at the combine.

Now that the combine is over, prospects can turn their attention to pro days and private team workouts — and not just the guys who had bad combines who are trying to impress.

Murray didn't throw or run in Indianapolis. All he did after getting measured at 5-foot-10 and 207 pounds was meet with teams. He said he'll throw and run at Oklahoma's pro day.

Despite not breaking a sweat in Indy, Murray's measurements placated concerns he was way too short and small to survive in the NFL. Now, all the buzz is about how he might even follow former Oklahoma teammate Baker Mayfield as the top overall draft pick.

"I'm going to be happy wherever I go," Murray said. "At the end of this, it's an opportunity to go play football."