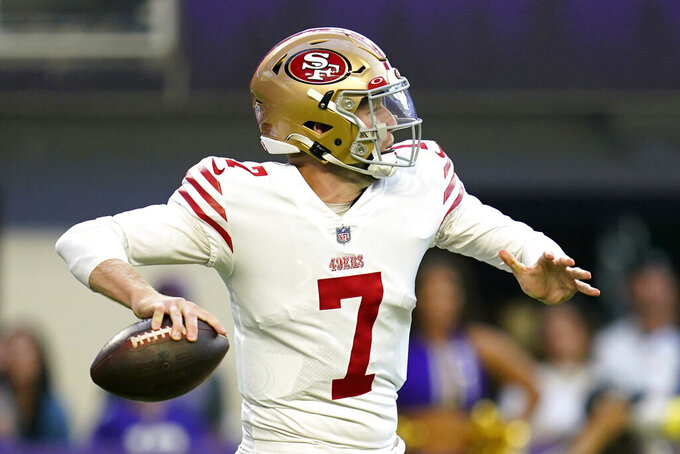 San Francisco 49ers quarterback Nate Sudfeld throws a pass during the first half of a preseason NFL football game against the Minnesota Vikings, Saturday, Aug. 20, 2022, in Minneapolis. (AP Photo/Abbie Parr)

MINNEAPOLIS (AP) — A week of joint practices in Minnesota allowed the Vikings and San Francisco 49ers to evaluate their starters in a controlled environment.

Their preseason game Saturday night was all about the backups.

Nate Sudfeld led a 14-play, 79-yard drive for a go-ahead touchdown early in the fourth quarter and San Francisco beat the Vikings 17-7.

Sudfeld started and went 13 of 17 for 102 yards in the competition with rookie Brock Purdy to back up starting quarterback Trey Lance. JaMychal Hasty caught the touchdown toss from Sudfeld and rookie Danny Gray hauled in a 2-point conversion after a busted coverage by Minnesota.

“Brock’s done a good job every time he’s gotten his opportunity,” 49ers coach Kyle Shanahan said of his backup quarterbacks. “I thought Nate did some real good things tonight and last week, too. But I like both of those guys and we’ll see how it finishes up.”

Robbie Gould converted each of his three field-goal attempts for San Francisco.

In the second preseason game for both teams, it was largely a sloppy performance after nearly all the projected first-team players were held out.

There were four combined turnovers, three by Minnesota, with three fumbles — with each team losing one. The 49ers averaged 4.6 yards per play and the Vikings were held to 3.9 yards per play in their first home game with Kevin O’Connell as head coach.

“Our game reps took place at our facility this week in that competitive environment that we’re able to bring in,” O’Connell said. “I feel like our team improved. Those starters got a lot of work and a lot of great competitive work. I felt we had a really good week of practice against a really good defense, really good front that can consistently get pressure.”

Second-year quarterback Kellen Mond started for Minnesota, but was intercepted on the first drive of the game. Mond finished 10 of 20 for 82 yards and was also picked off on his final throw of the night.

Sean Mannion was 10 of 15 for 65 yards as he and Mond battle for the backup job to Kirk Cousins. Rookie Ty Chandler had 19 yards rushing, including a 3-yard TD on an eight-play, 60-yard drive engineered by Mannion.

“You would have loved to come out of tonight feeling like, ‘Shoot, they both moved the team and scored a lot of points and we’ve got a heck of a hard discussion and conversation ahead as a staff and as an organization,’” O’Connell said of Mond and Mannion. “Although we didn’t do that, I still think there’s some real teachable moments and then some real moments where we’ll be able to evaluate and kind of really look at where we are at that position as we kind of restack everything to go into this week.”

Purdy finished 14 of 23 for 128 yards for San Francisco and had some strong moments, but he dropped an exchange with running back Tyrion Davis-Price with the 49ers at the goal line.

Lance, a Minnesota native, didn’t play, nor did Jimmy Garoppolo.

SORRY, NOT THIS TIME

In total, the teams declared 54 players out before the game, 27 for each.

Kinlaw had a sack and Womack had a fumble recovery.

The lone projected starter for the Vikings to play was defensive end Armon Watts.

49ers: DT Arik Armstead (knee) and CB Emmanuel Moseley (hamstring) started to work back into practice this week, but were held out. S Jimmie Ward (hamstring) and RT Mike McGlinchey (knee) are starters who are further away from a return. ... RB Elijah Mitchell (hamstring) was held out. ... RB Trey Sermon (ankle) started and had five carries for 8 yards.

Vikings: CB Andrew Booth Jr., a second-round rookie, left in the first half with an ankle injury and was ruled out for the rest of the game. ... TE Irv Smith Jr. (thumb surgery) remains on track to be ready for the regular-season opener. He’ll be eased back into practice soon, O’Connell said this week. ... OL Chris Reed, who’s been in the mix at center and right guard, has an elbow injury. He didn’t play Saturday after not practicing this week. ... RG Jesse Davis was held out of practice Thursday, wearing a sleeve on his right knee. He didn’t play.

Alfredo Gutiérrez, a backup offensive tackle who spent last season on the 49ers' practice squad, got into the game late for his first game action in the NFL and was awarded a game ball by Shanahan.

Gutiérrez, who was born in Tijuana, Mexico, was signed by San Francisco last year as part of the league’s International Player Pathway Program.

“Yeah, I was a lot nervous,” Gutiérrez said. “I know the cadence, but I was still asking my friends, like, ‘This is the cadence, right?’ They were like, ‘Yeah, calm down.’ First time in an NFL stadium, that was awesome. That was a really good feeling.”

Vikings: Play at Denver on Aug. 27 in the preseason finale.