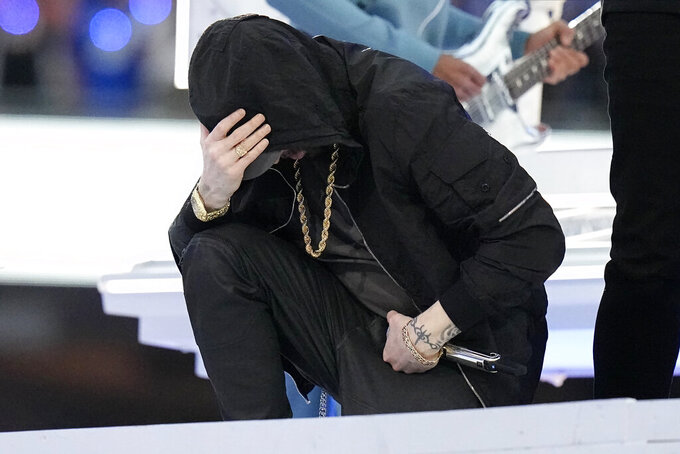 Eminem kneels down during the halftime performance at the NFL Super Bowl 56 football game between the Los Angeles Rams and the Cincinnati Bengals Sunday, Feb. 13, 2022, in Inglewood, Calif. (AP Photo/Chris O'Meara)

The show brought about as much hip-hop as a stadium can hold, with Dr. Dre, Snoop Dogg, Mary J. Blige, Eminem and Kendrick Lamar spitting a fiery medley of their hits.

As his rendition of “Lose Yourself” ended, Eminem took a knee and held his head in his hand in apparent tribute to former San Francisco 49ers quarterback Colin Kaepernick, who took a knee during the national anthem to protest police brutality during the 2016 season. Other players followed suit, and the move created widespread cultural controversy. Kaepernick would be out of the league soon after.

The NFL denied reports that it was attempting to stop Eminem from making the gesture.

“We watched all elements of the show during multiple rehearsals this week and were aware that Eminem was going to do that,” league spokesman Brian McCarthy said.

It was a rare Super Bowl halftime show performed in the daylight, but it still had a feeling of a nightclub at SoFi Stadium on Sunday, with a set made up to look like the houses of nearby Compton and South LA.

Dre and Snoop opened the show with “Next Episode” and “California Love.”

50 Cent, not among the announced performers, started his “In Da Club” while hanging upside inside one of the rooms.

Blige was decked out in silver sparkles and surrounded by backup dancers as she sang a medley of her hits.

The set was surrounded by what looked like a lit-up cityscape from above, with classic convertibles and replicas of the Tam's Burgers stand and the sculpture outside the Compton Courthouse.

The crowd had lanyards with LED lights that flashed in coordination with the show’s beats, turning the whole stadium into a light show.

An explosion of fireworks lit up the sky as the sun set outside and the show ended, with Snoop and Dre performing “Still DRE.”

AN AVERAGE ANTHEM, IN LENGTH ONLY

“Quickie Mickey” slowed it down for the Super Bowl.

Mickey Guyton, who told The Associated Press this week that she'd earned the nickname for singing “The Star Spangled Banner" in a tight 1:30, sang it in about 1:50 on Sunday before the Los Angeles Rams and Cincinnati Bengals took the field.

Oddsmakers had put the over/under on the anthem length at 1:35.

“I don’t want to ruin anybody’s sports bets, but let’s just say it’s the Super Bowl, so it most likely won’t be as fast," the Grammy-nominated country singer told the AP.

She delivered a soaring, emotive version of the anthem with a minimum of frills that was largely acapella at first before a small choir and piano joined her.

She was still faster than the average Super Bowl anthem of around two minutes.

Guyton did not appear to drop or flub a word, another propositional bet that was offered. And those who bet on her outfit being blue can cash in. She wore a royal blue gown.

The 38-year-old Texas native, best known for her hit “Black Like Me,” made history as the first Black woman to earn a Grammy nomination in a country category and first Black solo woman to host the ACM Awards. She’s a four-time Grammy nominee — up for three at the upcoming ceremony in April.

ROCK ROLLS OUT THE KICKOFF

Dwayne Johnson brought out “The Rock.”

Standing on the field, the actor grabbed a mic and put on his old wrestling persona to introduce the teams just before kickoff, in the style of an announcer before a big fight.

“Finally! The Super Bowl has come back to Los Aaaaangelesssss!” Johnson said, cocking his eyebrow as he did when he was WWE star before he became a movie star.

He introduced the Rams as a team with a “a soul-crushing, unrelenting defense" and “a head-spinning onslaught of an offense,” and the Bengals as “a team that has risen from the ashes to become one of the most feared, dominant, absolutely electrifying teams in the NFL.”

Johnson played football himself for the University of Miami, where he won a national championship in 1991.

“It is time for all of us here and millions around the world to bear witness to these incredible players, who will leave every ounce of sweat, guts, pride and legacy out here on this hallowed field, because that is what champions do," he said. “Ladies and gentlemen, it is my honor to say: ‘Finally, it is time for the Suuuper Boooooowwwl!’”

Guyton's “Star Spangled Banner” was really the final part of a trilogy of anthemic pregame songs.

About 40 minutes before kickoff, the Rams and Bengals lined the end zones and looked up at the big screen while outside, next to SoFi Stadium’s lake, gospel duo Mary Mary and the LA Phil’s Youth Orchestra Los Angeles performed “Lift Every Voice and Sing,” a song that's known as the unofficial Black national anthem.

The duo, sisters Erica Campbell and Trecina Atkins-Campbell, grew up in the same neighborhood as the Super Bowl stadium.

And down the field from Guyton, singer Jhené Aiko brought a novel combination of R&B and harp to her rendition of “America the Beautiful.”

STARS ON THE BIG SCREEN

Celebrities in the stands of the first Hollywood-adjacent Super Bowl in nearly 30 years provided much of the entertainment at SoFi Stadium during commercial breaks.

Jennifer Lopez didn't seem to notice she was on the huge 360-degree screen at all.

And a shot of a man in a hoodie whose face was fully covered by a black mask who was seated with NFL player Antonio Brown set off social media speculation on his identity.

The loudest cheers came for local Los Angeles sports heroes, including Dodgers pitcher Clayton Kershaw and former Lakers Kareem Abdul-Jabbar and Shaquille O'Neal, who wagged his tongue at the camera.