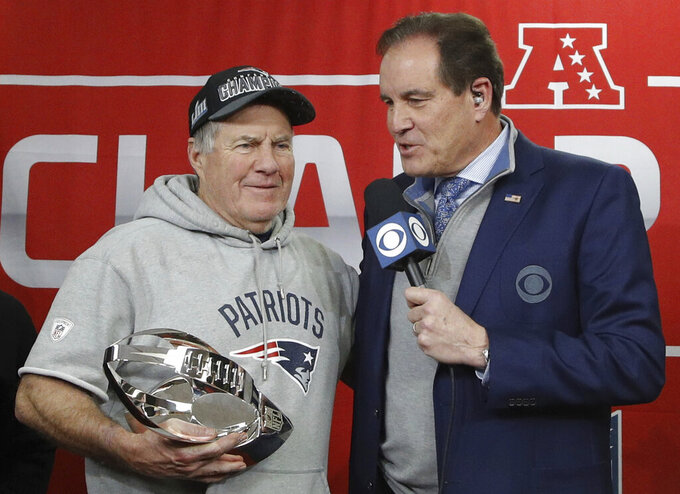 FILE - In this Sunday, Jan. 20, 2019, file photo, New England Patriots head coach Bill Belichick holds the AFC Championship trophy as he talks with broadcaster Jim Nantz after defeating the Kansas City Chiefs the AFC Championship NFL football game in Kansas City, Mo. Nantz has been the lead announcer for many events during his 34 years at CBS, but calling four major championship events in a span of 106 days will be something new. The stretch begins on Sunday when Nantz calls his fifth Super Bowl. (AP Photo/Charlie Riedel, File)

Jim Nantz has been the lead announcer for many events during his 34 years at CBS. Calling four major championships in a span of 106 days will be something new.

Nantz calls his fifth Super Bowl on Sunday when the New England Patriots take on the Los Angeles Rams. That will be followed by the NCAA Men's Final Four and the Masters in April. What will be new this year is the PGA Championship moving from August to May.

"I'm trying not to look to far ahead, but it is an exhilarating stretch," Nantz said in a phone interview. "It sounds a little overwhelming, but there are many outstanding events coming up."

Nantz has done the Super Bowl, Final Four and Masters trifecta four times (2007, '10, '13 and '16), but changes to the PGA Tour's calendar gives CBS the first two majors instead of the first and last.

Besides the aforementioned events, Nantz is just as excited for the upcoming golf tournaments at Pebble Beach and Los Angeles as well as calling the Big Ten basketball tournament.

One of Nantz's main goals during Super Bowl week in Atlanta has been to make sure Tony Romo enjoys the experience and doesn't get too caught up in calling his first Super Bowl.

"I'm thrilled for him. He has been consistently great since our first game. He has been slightly refined, but the thing to remember is we have done only 44 games. It still remains very new," Nantz said.

Romo was asked earlier in the week if he planned to join Nantz and Nick Faldo during a golf broadcast. He said he would love to improve his game and eventually qualify for a PGA event.

Other things of note for Super Bowl weekend:

Scheduling the segments for a four-hour pregame show may seem like a daunting task, but "Super Bowl Today" producer Drew Kaliski said that there is a certain flow to figuring out when to air certain pieces.

"You can't come out of the gate at 2 (p.m.) with all football. We are going to touch on the game, but there are other pieces that are important," Kaliski said. "As players start arriving at the stadium, we will start to get more into the analysis of the game."

In other words, features on the Atlanta music scene, an interview with Joe Namath 50 years after leading the New York Jets to their only Super Bowl, and CBS News' interview with President Trump will happen from 2-4:30 p.m. with the last 90 minutes geared toward analyzing the game.

CBS Sports President Sean McManus viewed most of the pregame features on Friday and said during a phone interview that he is extremely pleased with what he has seen.

"I have never seen a variety of pieces and features that are more attractive," McManus said. "We have everyone from Warren Buffett to Hank Aaron to Magic Johnson. I am really excited about them."

Among the pieces that McManus mentioned are a look at Atlanta and its role in the Civil Rights Movement; a feature with Rams defensive tackle Ndamukong Suh that includes an interview with Buffett; and looking back at the 50th anniversary of Super Bowl 3 with Namath.

CBS' Super Bowl programming kicks off at 11:30 a.m. on Sunday with "That Other Pregame Show." The show has been on CBS Sports Network on Sunday during the regular season and provides a lead in to "The NFL Today," but this is the first time TOPS will be seen on the main network.

The program, which has a more relaxed feel compared to other pregame shows, has made former Raiders president Amy Trask one of the more underrated analysts. It will also mark the first time a woman director and producer have been at the helm for a network pregame show.

"This is a tribute to the work (producer) Deb Gelman and (director) Linda Malino have done, and the confidence we have in them," McManus said.

Drew Brees, Philip Rivers and Larry Fitzgerald are frequently mentioned as players with potential to be great analysts should they decide to move into television. But they aren't likely to retire for another year or two.

There is one player and a coach, though, who could end up in the booth for next season: tight end Benjamin Watson, who is retiring after 15 seasons, and former Bengals coach Marvin Lewis. Both have appeared on various shows from Atlanta this week and have been highly regarded through the years for their interaction with various crews during production meetings.

"You have to find someone who wants to make it a second career and work as hard as they did as a player or coach," McManus said. "What also matters is how you see the field and can you analyze the offense and defense? How likable are you on TV? That's something you can't predict until the light goes on."