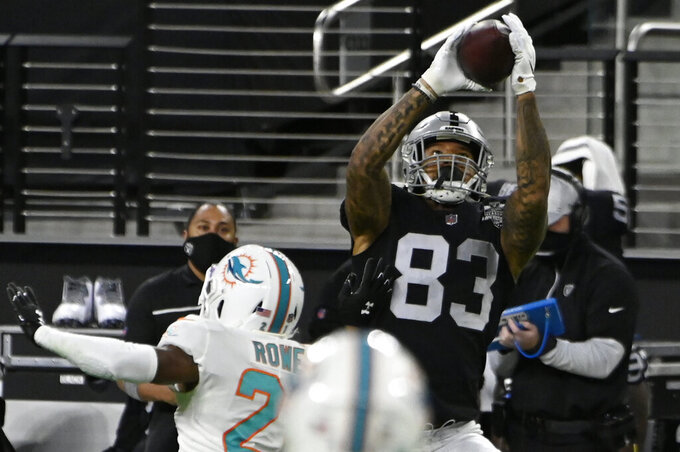 Darren Waller has come a long way in just over two years since the Raiders plucked him off Baltimore’s practice squad.

After nearly ruining his career because of a drug addiction, Waller has turned into one of the game’s most productive tight ends and is closing in on the franchise record for catches in a season.

“To even be mentioned with his name is is pretty crazy because I remember watching him when I was super young,” Waller said. “I was like like 6 or 7 years old when he set that record. So to even be in the conversation is amazing.”

Almost everything about Waller is amazing as he has developed from a seldom-used receiver in Georgia Tech’s option offense in college, to a disappointment with the Ravens because of off-field problems to Pro Bowl status as one of the game’s top tight ends.

With an impressive combination of athleticism and size, Waller has become one of the most difficult matchups by exploiting smaller and less athletic defenders. Coach Jon Gruden called him “one of the best players I’ve ever seen play football.”

“He’s got the Tim Brown, Hall of Fame, All-Pro work ethic, concentration, focus, desire and he has the right attitude every single day,” Gruden said. “He’s a premier competitor in the walk-throughs, in the meetings and on the field, and that’s why he’s standing where he is today as one of the best.”

Waller has been at his best the past month even as the Raiders have struggled down the stretch for a second straight season by losing five of six games. He had 13 catches for 200 yards and two TDs in Week 13 against the Jets, followed by three more strong games, giving him 34 catches for 537 yards in that span.

“His work ethic, his preparation, how he goes about his week and his winning routine every week, he’s just a real special football player,” offensive coordinator Greg Olson said. “But a special leader, special person as well. I know his story is out there and a lot more people are getting to know Darren Waller. We couldn’t be more proud of him as an organization or a coaching staff.”

Waller’s journey has been an inspiring one. After nearly squandering his career in Baltimore because of a drug addiction, he has developed into a star.

Waller was suspended four games in 2016 and all of 2017 because of drug violations. He spent most of 2018 on the Ravens' practice squad before the Raiders plucked him away late that season. He has made a big impact on the field and with his work off it with his foundation helping people with drug addictions.

“I was far from an open book years ago,” he said. “I never imagined myself or planned on speaking the way that I speak now. It took accepting who I was, accepting what I did, and realizing that it didn’t have to define me. I could do something different about it. Just not dwelling in those things and getting rid of the shame of my struggles. There was a lot of shame, a lot of guilt for all the times that I was suspended, not representing my team and my family name the way that I could have. I would always carry that around with me everywhere I went.

“Just addressing all that stuff and deciding to leave that stuff behind and move forward makes me feel like lighter and freer. There’s nothing anybody can say that could put me down about it. I’ve already put myself down enough, and now that I’ve moved past it there’s no looking back for me.”