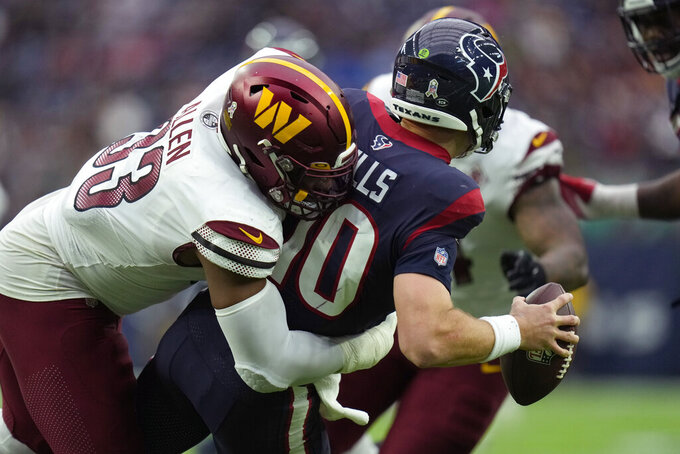 HOUSTON (AP) — A combative and irritated Lovie Smith spent most of his postgame news conference on Sunday deflecting questions about why quarterback Davis Mills hasn’t been benched after the Houston Texans were embarrassed at home in their worst performance of the season.

Mills threw two interceptions, the first of which was returned for a touchdown, and Houston mustered a season-low 148 yards of offense in a 23-10 loss to the Washington Commanders.

“I’m going to watch the video is what I’m going to do,” the Texans' coach said when asked if he'd consider a QB change. “We’re going to evaluate it like we normally do. We don’t make those kind of decisions 30 minutes after the game before I get a chance to talk to all the coaches, no. I think most of you know that.”

“There’s not a whole lot that we’re doing well,” Smith said. “We’re building. We’re not quite there yet. We’re not a good football team right now.”

The Texans were outgained 246-5 in the first half, their fewest net yards in a half franchise history, as they fell into a 20-0 hole. The five yards passed the 8 they managed in the first half of a 40-0 loss to the Bills last season.

It was the fewest yards by a team in a half since the Raiders had minus-12 in a win over the Broncos in 2015, a terrible performance even by the standards of this struggling team. Mills had minus-1 yard passing in the first half as he was sacked three times before the break.

“Props to their D-line, their front seven, handled (us) pretty well,” Mills said. “They kind of dominated today. We were having to play from behind the chains. A lot of third-and-longs that were just pretty hard to convert. Just couldn’t get much going.”

Montez Sweat and Jonathan Allen had two sacks apiece and combined for six quarterback hits to lead a Washington defense that hurried and harassed Mills all day.

“You say it starts with quarterback,” Smith said. “But no, it starts up front is where it starts and today with that type of pressure, I don’t know how many quarterbacks could have had success.”

Even if Smith were to bench Mills, who is in his second year, things probably wouldn’t get much better. Second-stringer Kyle Allen threw 17 touchdowns with 16 interceptions in 12 starts for Carolina in 2019 but has spent the rest of his career as a backup.

“We just got beat,” Smith said. “If there was something we thought that we should have done right away, we would have done it right away. We’re searching for answers is what we’re doing and we’ll keep working on different combinations.”

While this season appears lost, Houston is in good position to spend an early first-round draft pick on a QB next spring.

Commanders fans were more vocal in the stands Sunday than Texans supporters. Smith took issue when a reporter said the team has been booed at home all year, interrupting him to address it.

“Let me stop you right there, we haven’t been booed all year,” Smith said. “We’ve been booed, yes, and every time something is bad, fans are going to boo, and they have a right to do that.”