Thomas to IR, Reyes could be 1st Chilean to play in NFL game 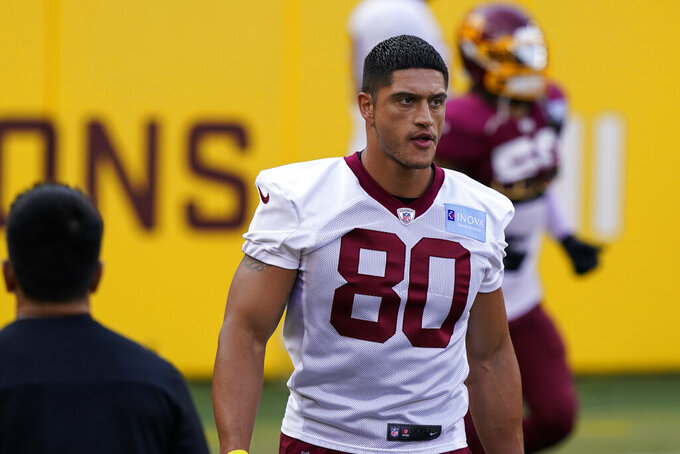 FILE - Washington Football Team tight end Sammis Reyes (80) walks on the field for an NFL football practice at FedEx Field in Landover, Md., in this Friday, Aug. 6, 2021, file photo. Sammis Reyes is on the verge of becoming the first person from Chile to play in an NFL game. He is expected to be in uniform Sunday against the New Orleans Saints after an injury to teammate Logan Thomas. The converted basketball player who emigrated to the U.S. as a teenager appreciates his journey and the significance of being the first Chilean to reach the NFL. Reyes called Washington his dream team and said he did not want to play for anyone else. (AP Photo/Alex Brandon, File)

ASHBURN, Va. (AP) — Sammis Reyes grew up poor as the son of a physical education teacher and insurance adjuster in Chile dreaming of what he could make out of life.

When the opportunity presented itself as a teenager to play basketball in the United States, his family sent him $50 a month to get by. Reyes did not know a word of English and learned as much as he could from watching “The Matrix.”

Now he’s on the verge of making some history. Washington put tight end Logan Thomas on injured reserve Wednesday with a hamstring injury, an absence of at least three games that could open the door for Reyes to become the first Chilean player to appear in an NFL game.

If Reyes plays Sunday against the New Orleans Saints or soon after, it would mark another milestone in the 25-year-old’s journey that has taken him from Talcahuano to the football field with plenty of twists in between.

“Where I’m from, the cost of a helmet is what parents pay for six months of school,” Reyes said. “I’m not naïve to the fact that I’m the first one to do it. I’m only thankful for the opportunity to showcase that we can do it, that people from Chile can also do big things and we can leave our country and seek better opportunities elsewhere.”

Washington did sign experienced tight end Jace Sternberger, a 2019 third-round pick who was released by the Green Bay Packers following a two-game suspension for violating the league’s substance abuse policy.

But Reyes' familiarity with offensive coordinator Scott Turner's system and his meteoric rise from not knowing football to an NFL roster makes him the favorite to replace Thomas in uniform.

“Sammis looks like he’s going to get an opportunity,” coach Ron Rivera said Monday. "He’ll have to start getting himself geared up and ready to roll.”

Reyes sees his life as a series of failures leading to this point. His parents played basketball, and playing for the Chilean national team opened the door to the U.S. with the availability of a scholarship.

He lived in Florida and Hawaii and eventually New Orleans, where Reyes played Division I college hoops at Tulane. When that didn’t pan out as a long-term career, he drove for DoorDash early in the pandemic while listening to podcasts to understand everything he could about football.

“As I was driving, I would sit there and I would listen and try to understand what a 4-3 defense meant,” Reyes said. “I took every second that I had and did the best that I could with it.”

The 6-foot-5, 260-pound Reyes kept getting recommendations to play football, so he entered the NFL International Pathway Player Program.

After just 10 weeks and the chance to show his skills, he got a three-year contract from Washington — his dream team because the area has become his adopted home with his girlfriend’s family around.

“All the people that I love are here, besides of course my family in Chile,” he said. “I finally felt like I was at home after looking for that for so many years.”

Reyes spent late nights studying the playbook, putting his phone away to focus on drawing up each play and trying to catch up with teammates who have years of experience and know it all as second nature.

He showed enough of a grasp during training camp and preseason games to earn a spot on the 53-man roster, and Rivera has referred to Reyes as a big part of Washington’s future.

“He’s got the body for it; he also has the mindset,” Rivera said Monday. “When you watch him and see him, the way he prepares, the way he studies and gets himself ready to do things, he’s done it the right way.”

Rivera considers Reyes being from Chile important to show football is a world sport: “When you can find athletes from all over, that’s a pretty neat thing.”

Reaching the NFL from Chile was still a surprise for Reyes, who knew a few guys growing up who would train together back home but understood nothing of the sport until this year.

Much like the conversations with his parents and other family members when he got the contract offer and made the team, Sunday is another chance for him to reflect on how far he has come.

“It’s been crazy,” he said. “It’s been a hard year, but at the same time it’s been probably the most rewarding year of my life.”