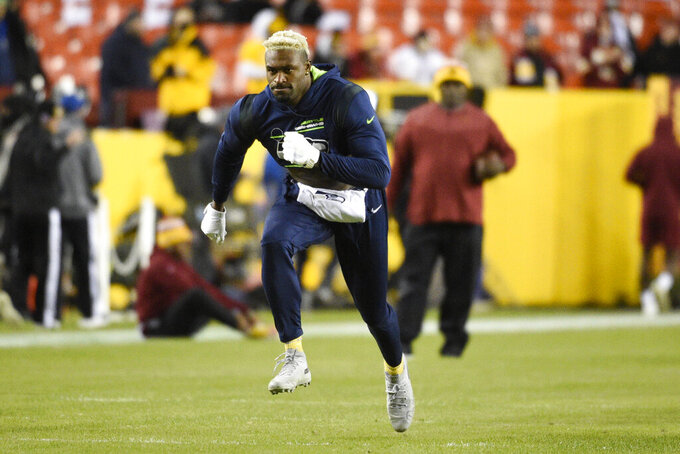 Seattle Seahawks wide receiver DK Metcalf running on the field during pregame warmups prior to the start of the first half of an NFL football game against the Washington Football Team, Monday, Nov. 29, 2021, in Landover, Md. (AP Photo/Mark Tenally)

LANDOVER, Md. (AP) — Tight end Logan Thomas and wide receiver Curtis Samuel were in uniform for Washington on Monday night against the banged-up Seattle Seahawks, who are down to two healthy running backs and are playing without their starting left guard.

Washington activated Thomas off injured reserve after he missed the past six games with a hamstring injury. This is just Samuel's second game of the season and first since Oct. 10 because of a groin injury that has lingered for months.

Running backs Rashad Penny (hamstring) and Travis Homer (calf) and guard Damien Lewis (elbow) were inactive for the Seahawks, who lost cornerback Tre Brown to a season-ending knee injury in their loss last week to the Arizona Cardinals. Alex Collins and DeeJay Dallas were Seattle's only healthy running backs.

With starting center Chase Roullier on IR because of a leg injury and backup Tyler Larsen inactive because of a knee injury, natural guard Wes Schweitzer moved to the middle of the offensive line just as he did in Washington's win at Carolina. Washington team promoted Jon Toth from the practice squad to give the team eight active offensive lineman against Seattle.

Tight end Ricky Seals Jones, who was listed as doubtful because of a hip injury, was inactive for Washington. The healthy scratches were receivers Dax Milne and Antonio Gandy-Golden, defensive end Bunmi Rotimi and cornerback Corn Elder.