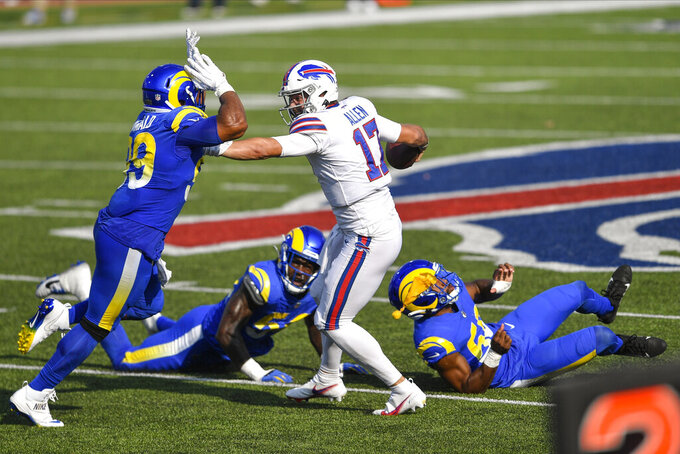 “He’s becoming a True Leader for this team,” the Hall of Fame running back wrote in a text to The Associated Press on Monday. “Showing maturity, confidence and now some touch in his passes, looking like an MVP candidate for years to come.”

Informed how Allen joined Thomas’ long-time Bills teammate and Hall of Famer, Jim Kelly, in becoming the second Buffalo player to top 300 yards passing in three consecutive games, Thomas responded by writing: “He will blow Jim’s numbers away easily, if he stays healthy.”

So far, there’s been no stopping Allen’s dynamic start to the season.

Dogged by criticisms about his accuracy and pedigree in being selected in the first round of the 2018 draft out of Wyoming, the quarterback is producing at a pace verging to be off the charts in Buffalo.

Allen is the first player in NFL history with 10 touchdowns passing and two touchdowns rushing through Week 3.

And let’s not forget Allen’s dramatic flair in rallying Buffalo to consecutive wins when trailing in the fourth quarter. A week after throwing two fourth-quarter TDs in a 31-28 win at Miami, Allen sealed his eighth-career fourth-quarter comeback with a 3-yard touchdown pass to Tyler Kroft with 15 seconds left in a 35-32 victory over the Los Angeles Rams on Sunday.

“He’s got a lot of fire in him, and that spreads throughout the team,” said receiver Cole Beasley, whose 17- and 22-yard catches on third downs extended Buffalo’s decisive 11-play, 75-yard drive. “Any time you’ve got a guy like that, you’re going to run through a wall for him.”

In getting Buffalo off to a 3-0 start in consecutive seasons for just the third time in team history, and first since 1991 and '92, Allen’s blemishes have been easier to overlook.

The win over Miami came after Allen and the offense sputtered by combining for 28 yards and one first down in the third quarter.

Against the Rams, Allen’s interception — the ball was stripped from Kroft’s arms — and a lost fumble led directly to two L.A. touchdowns.

Even worse, Allen was flagged for unsportsmanlike conduct for arguing with officials following his fumble, giving the Rams the ball on the Buffalo 37, which led to the go-ahead score.

Allen, however, regained his cool the following possession.

“You see that look in his eye when he comes in the huddle. He’s all going forward and he ain’t worried about the last play,” said Kroft, who scored twice. “When you have a quarterback that’s locked in, it takes a lot of extra pressure off of you because you know he’s going to be ready to go lead us.”

An aerial attack in which seven players have caught touchdown passes, after Kroft and fellow tight end Lee Smith each scored against the Rams.

A once-stout defense that’s suddenly having difficulty getting off the field. After giving up 400 yards just twice last season, Buffalo has allowed that many in consecutive games for the first time since 2017. The 29 points allowed in the second half were the most over the final two quarters since New Orleans scored 30 in a 47-10 win at Buffalo on Nov. 12, 2017.

Rookie WR Gabriel Davis had four catches for 81 yards in finding openings with the Rams focused on blanketing Stefon Diggs, and with John Brown sidelined for the second half.

Defensive front. It allowed a season-high 167 yards rushing, and showing signs of having difficulty replacing starter Star Lotulelei, who opted out for this season because of COVID-19 concerns.

Brown, who was bothered by a foot injury last week, missed the second half after hurting his calf. His status is uncertain. RB Zack Moss (toe) and TE Dawson Knox (concussion) were inactive Sunday.

Buffalo hits the road for two straight weekends, starting with a first-time visit to Las Vegas on Sunday. After playing at Tennessee on Oct. 11, Bills return home for a prime-time Thursday showdown against Kansas City on Oct. 15.