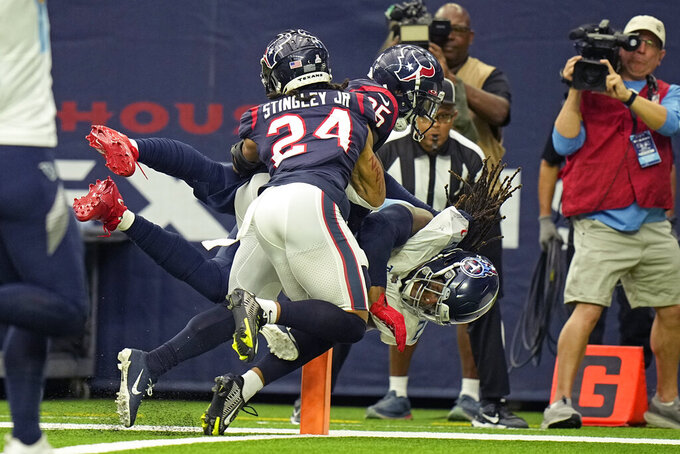 Tennessee Titans running back Derrick Henry scores a touchdown as he is hit by Houston Texans cornerback Derek Stingley Jr. (24) during the first half of an NFL football game Sunday, Oct. 30, 2022, in Houston. (AP Photo/Eric Gay) 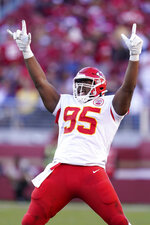 KANSAS CITY, Mo. (AP) — Patrick Mahomes rarely says the wrong thing when he stands at the podium. He is poised and polished, in victory or defeat, and has carried himself in that professional manner since he joined the Kansas City Chiefs.

So it speaks volumes of the lasting impression that the Titans' 27-3 rout of the Chiefs last season had on him when the Pro Bowl quarterback was asked about it this week: “We weren't ready,” Mahomes replied, “and they beat our (butt).”

Only he used a three-letter word for derrière rather than a four-letter one.

That's about as close as you'll get to Mahomes cursing in public.

“They have that mentality that they're going to come in and win,” Mahomes continued, by way of an explanation, “and a lot of times in this league, when you don't have the confidence coming in, you're going to lose. But when you have a team that is as confident as you, it's going to be a battle.”

The Titans (5-2) have every reason to be confident as they visit Kansas City (5-2) for a Sunday night showdown between divisional leaders. They've won five of the past six in the series, including a wild-card playoff game, though the one defeat happened to come in the AFC championship game and sent the Chiefs to the Super Bowl.

In any case, the Titans also roll into Arrowhead Stadium having won five straight after an 0-2 start.

“It's tough. It's a fun place to play. It’s an atmosphere that you dream about when you’re a kid, going into a rowdy road environment. That is exactly it,” said Titans quarterback Ryan Tannehill, who hopes to return after missing last week's win over Houston with an ankle injury. “They love football. They’re loud. They’re into it the whole game.”

There are plenty of familiar faces from the last time the teams met in Kansas City for that AFC title game; Mahomes and Tannehill are two of them. Another is Titans running back Derrick Henry, who just gashed the Texans for 219 yards and two touchdowns last week. He was held to 69 yards rushing by Kansas City on Jan. 19, 2020.

“There are going to be things that you’re going to do to try and stop him. I think the whole NFL has tried that somewhere,” said Chiefs coach Andy Reid, who is 20-3 when his teams are coming off a bye. “He’s a great player, and you’re not going to stop him on every play. You just want to get the numbers up where it’s a reasonable number of stops.”

The Chiefs did that pretty well last year, too, holding Henry to 86 yards rushing.

It didn't matter. They still lost in a blowout in Nashville that Mahomes and Co. remember to this day.

“You watch that on film and see how you played, it wasn't just them beating us,” Mahomes said. “We played bad and they just put it down on us at the end of the day. We have to understand they're going to be ready to go.”

If Tannehill isn't available, the Titans would start third-round pick Malik Willis for the second straight game. Willis was 6 of 10 for 55 yards with an interception last week against the Texans.

The Chiefs sent third- and sixth-round picks to the Giants last week for Kadarius Toney, a former first-round pick who had struggled to stay healthy in New York. Toney not only gives the Chiefs a potential game-breaking playmaker at wide receiver, he also can help out in the punt return game, where rookie Skyy Moore has struggled with muffed punts.

“It feels good to be wanted by a team,” said Toney, who has recovered from a pair of hamstring injuries. “I felt like this was a great opportunity for everybody. Fresh start for me, step into the AFC and show what I can do over here.”

The Chiefs will be playing the first of two games without defensive end Frank Clark, who was suspended for violating the NFL's personal conduct policy. That could mean more pass-rushing opportunities for Carlos Dunlap, who has two sacks this season and needs two more to reach 100 for his career.

“I've had a couple games now with a chance for it,” Dunlap said. “Want to get that done so I can get over that hump.”

Chiefs cornerback Trent McDuffie should play for the first time since hurting his hamstring in the opener in Arizona. The first-round pick could have played the past two games, but Kansas City opted to play it safe and wait out the bye week.

REMEMBER THIS IN JANUARY

The Titans and Chiefs are tied for the second-best record in the AFC behind the Bills, who have beaten them both. That means the game could have playoff implications, such as where the teams would play if they meet again.

“I just focus on ways that we think we can beat the Chiefs and how we can prepare. All that stuff really takes care of itself,” Titans coach Mike Vrabel said. “The preparation, how we get ready and how we ultimately play, not what could be or what might happen down the road.”