Trades unlikely to save sub-.500 Rams after latest debacle 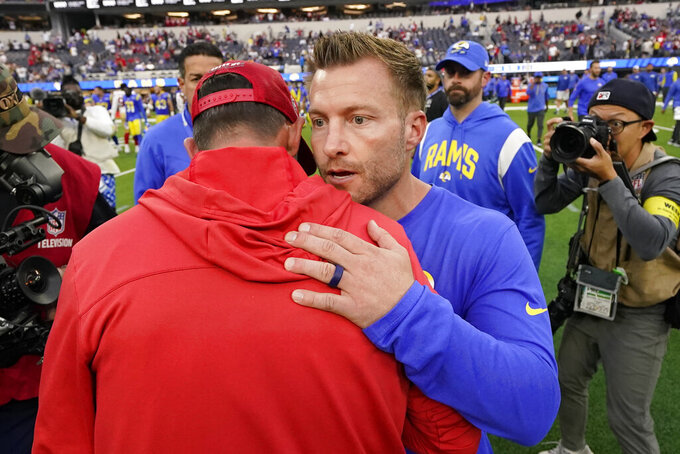 LOS ANGELES (AP) — The brightest side of the Los Angeles Rams' latest blowout loss is they don't have to play the San Francisco 49ers again this season.

Almost everything else coming out of Los Angeles' 31-14 home defeat Sunday was pretty dark, and it all cast serious doubt on the Rams' talent, offensive game-planning and overall fitness to defend their Super Bowl title.

The Rams were comprehensively outplayed by the 49ers, a .500 team that has recorded two of its four victories this season against Los Angeles. Christian McCaffrey embarrassed the team that failed to get him in the trade market, while the running backs in horned helmets were just as ineffective as nearly everybody else.

Not much about these Rams (3-4) suggests they're a team that should be going all-in at the trade deadline this week to make yet another splashy acquisition for a run at championship contention. Coach Sean McVay acknowledges the Rams' record and playing form impacts their decision on whether to use their trade assets.

“You always want to take into consideration any of your moves not only for the given year, but for the long term,” McVay said Monday. “That is certainly a factor, just based on where we're at in the season and what it looks like for us.”

General manager Les Snead reportedly has been active in discussions about the likes of McCaffrey and Carolina edge rusher Brian Burns, but the one-sided nature of the Rams’ four defeats has given no indication this team is capable of contending with the NFL’s best.

Most of this ineptitude sits squarely on McVay and his offense. Los Angeles got 163 of its paltry 223 yards Sunday on two drives in the first half, and every other drive was a different shade of awful.

McVay’s offensive acumen hasn’t overcome the challenges of having a subpar offensive line and a pronounced lack of talent at running back and receiver.

“If you said, ‘Is this what you expected through seven games?’ No, it's nothing like what we had expected," McVay said. “But this is where we're at, and there's got to be an evolution and an adaptation that's absolutely necessary. It hasn't been good enough, and I take a lot of responsibility for that, but there has been a whole lot of moving parts that have contributed to that.”

The Rams have never been at .500 or worse this late in McVay's six seasons, yet the veteran players less than nine months removed from a Super Bowl victory also realize nothing is decided yet.

“We’ve only lost four games, and we can still turn things around," defensive tackle Greg Gaines said. "We still have plenty of time, plenty of games left. It’s just getting everybody to put that stuff behind us and keep moving forward. ... If we start winning from here on out, we can go to the Super Bowl again. We’ve still got plenty of time.”

Matthew Stafford and Allen Robinson are finally building a relationship. Robinson had a season-high five catches for the second straight game, including a pair of big third-down conversion grabs on solid throws from Stafford, who appears to be trusting the Rams' big offseason addition more. Stafford had a solid game overall against San Francisco's formidable defense, making several strong throws and not turning the ball over despite two sacks and five QB hits.

Los Angeles sits 31st in the league with 68.4 yards rushing per game. Its most productive rusher, Darrell Henderson, is 54th in the NFL with just 197 yards. Undrafted free-agent rookie Ronnie Rivers, who was released by two teams in August, was the Rams’ leading rusher Sunday. McVay refused to specular on whether disgruntled Cam Akers will still be on the team after the trade deadline after sitting out the past two games.

Edge rusher Leonard Floyd had his best game of the season, sacking Jimmy Garoppolo twice and collecting three QB hits and nine tackles. The Rams have clearly needed more production from their pass rush, and Floyd finally got tangible results with the trade deadline looming.

TE Tyler Higbee had a rough game after fighting through a neck stinger in the first quarter. He struggled in pass protection, and he made an awful drop on a third-down pass that could have kept the Rams in the game. ... S Taylor Rapp also had a dismal game filled with missed tackles and blown assignments.

All-Pro Cooper Kupp has no structural damage and “only a little lateral soft-tissue swelling” in his right ankle after getting hurt late in the game, McVay said. The Rams expect Kupp to play this Sunday after resting during the week.

A long trip to face struggling Tampa Bay, the only team with a worse rushing offense than the Rams. This rematch of a postseason thriller is a golden opportunity to get back on track for Los Angeles, which has long been an excellent road team under McVay.