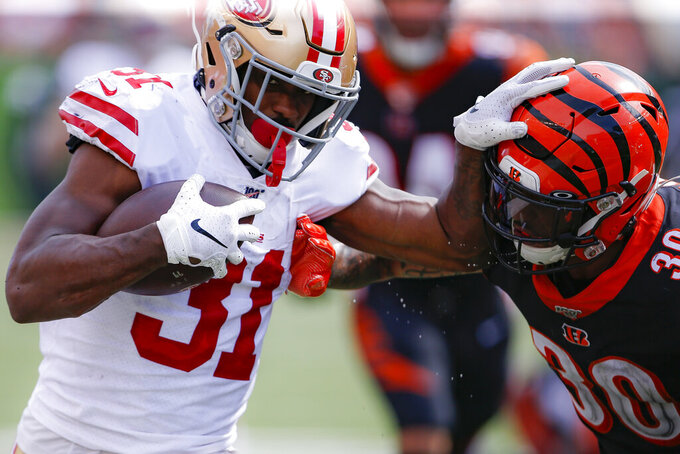 A trio of undrafted free agents is making sure the Niners don't miss a beat.

Matt Breida, Raheem Mostert and Jeff Wilson Jr. combined for San Francisco's sixth most productive rushing day of the past decade last week in Cincinnati, leading the team to 259 yards on the ground and two touchdowns and creating the threat that fueled the play-action passing game from Jimmy Garoppolo.

It was an impressive performance from three players who entered the league with little notoriety. Breida, Mostert and Wilson all failed to get drafted but are proving they can play now that they've gotten the chance.

"When you come in the league undrafted, usually you're last on the depth chart and they don't expect you can play," Breida said Wednesday. "You have to prove you can belong in the league."

The three are doing just that, making sure the Niners don't miss Jerick McKinnon and Tevin Coleman, who were supposed to be the center pieces of the running game.

McKinnon, who signed a four-year, $30 million contract in 2018, has yet to see the field in San Francisco because of a pair of knee injuries that have sent him to injured reserve before the start of the season each year.

Coleman signed a two-year, $8.5 million contract this offseason but sprained his ankle in the season opener at Tampa Bay and will be sidelined for at least a few weeks.

That opened the door for the cheaper crop of backs to step up and they are making the most of their opportunities.

"I always look at how much they get that we block for and then they are paid for what they get after. All three of our guys broke a lot of tackles and did a great job," coach Kyle Shanahan said. "If you want one guy to do it all on his own you might have to always go for a top-five pick and you're going to be disappointed until Barry Sanders comes around. I never feel like running the ball with just one guy, it's got to take everyone."

Breida is one of four backs to average at least 5.0 yards per carry the past three years with a minimum of 250 attempts, showing the patience to find the hole in San Francisco's zone-running scheme and the speed to break long runs when he gets the chance.

He had 12 carries for 121 yards last week and has been at his best when Shanahan has been able to limit his playing time to make sure he doesn't wear down.

"He always hits the right hole and that's why he was hard to get off the field last year, even when he wasn't always 100%," Shanahan said. "Breida's also as tough as any running back I've been around, but it's also very important to keep him fresh."

That was difficult at times last year but was possible in large part last week because of the emergence of Mostert, a special teams standout who carried the ball only eight times his first three seasons in the NFL. But he showed flashes last season with 28 carries for 250 yards during a four-game stretch that ended when he broke his arm against the Raiders.

Mostert is healthy again and off to a good start this year with 22 carries for 123 yards the first two weeks, to go along with a 39-yard TD on a screen pass last week.

"They didn't really know our abilities," Mostert said of the scouts who overlooked him and Breida. "It was pretty cool, going out there and competing together and doing what we love to do and showing we can play. We were just having fun."

Wilson began this season on the practice squad after providing a late-season spark last year. He got called up last week to replace Coleman and showed the toughness to provide two TD runs in the red zone.

The success of that running game played a big role in Garoppolo's success last week. He went 10 for 10 for 213 yards and two TDs for a perfect passer rating of 158.3 when using play action against the Bengals, according to Pro Football Focus.

"When you rush the ball for 250 yards, that makes everything a lot easier," Garoppolo said. "Those guys up front, selling the run, getting downhill on guys, the defense has to respect the run when you're running it for whatever, 10 yards a carry, something like that. Just all those things coming together."