Vikings, Commanders match up with winning streaks at stake 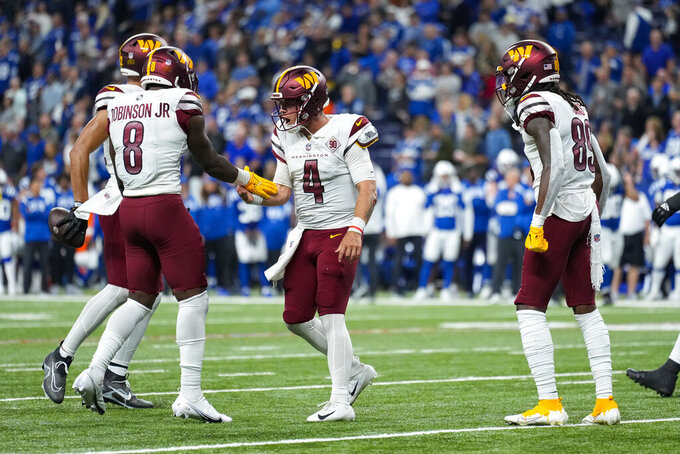 Washington Commanders quarterback Taylor Heinicke (4) celebrates a touchdown in the final minute of the second half against the Indianapolis Colts of an NFL football game in Indianapolis, Fla., Sunday, Oct. 30, 2022. (AP Photo/AJ Mast)

AGAINST THE SPREAD: Vikings 3-4; Commanders 4-4

TURNOVER DIFFERENTIAL: Vikings plus-6; Commanders minus-4

VIKINGS PLAYER TO WATCH: WR Justin Jefferson. The Vikings have ramped up their running attack lately, and TE T.J. Hockenson was acquired this week to give QB Kirk Cousins another potent option in the passing game. Jefferson has not scored since a pair of TDs in Week 1, but he’s still been remarkably productive amid the extra attention opposing defenses routinely give him. Jefferson is third in the NFL with 752 yards receiving yet still overdue for a monster performance.

COMMANDERS PLAYER TO WATCH: DT Jonathan Allen. One of three players still left from Cousin's tenure with Washington, the 2017 first-round pick leads the line that has keyed the defense's turnaround. Allen and fellow Alabama product Daron Payne have combined for eight sacks and along with edge rusher Montez Sweat have created plenty of QB pressure all season. Allen has the potential to be a difference-maker against the run and the pass.

KEY MATCHUP: Commanders QB Taylor Heinicke and WR Terry McLaurin vs. Vikings secondary. Heinicke has thrown a bad interception in each of his first two starts this season, and Minnesota's defense picked off Kyler Murray twice last week against Arizona. But the Vikings pass defense is among the worst in the league, and Heinicke has developed real chemistry with McLaurin, which will be a challenge for CBs Patrick Peterson and Cameron Dantzler.

KEY INJURIES: Vikings TE Irv Smith Jr. (ankle) will be out for at least a month, so Hockenson will step right in and share time at the position with Johnny Mundt. Vikings DE Dalvin Tomlinson (calf) did not practice Wednesday, and his status for the game is in doubt. Over their first seven games, the Vikings had only one missed game to injury by any starter. ... Washington's Chase Young, working slowly to return from a torn ACL in his right knee, is likely to be out again despite returning to practice this week. ... Commanders rookie WR Jahan Dotson could miss a fifth consecutive game with a hamstring injury. ... LB Cole Holcomb's status is certain after missing the Colts game with a foot injury.

SERIES NOTES: Minnesota has won six of the past eight games over a 15-year span, with the most recent loss coming on the road in 2016 when Cousins was Washington's starting QB. ... Cousins is set to play at Washington for the first time since he signed with Minnesota in 2018. He faced the team he spent his first six NFL seasons with at home with Minnesota in 2019. ... First-year Vikings coach Kevin O'Connell spent three seasons as an assistant with Washington, as quarterbacks coach in 2017 and 2018 and offensive coordinator in 2019.

STATS AND STUFF: The Vikings are seeking their first 7-1 start since 2009. They have a 3½-game lead in the NFC North over Green Bay and Chicago. ... Cousins has the NFL’s longest active streak with 37 consecutive games with at least one TD pass. That’s the sixth longest in league history. Drew Brees has the league record with 54 straight games over a span from 2009-12. ... Jefferson has an NFL-most 63 receptions of 20-plus yards since entering the league in 2020. The next-closest players are Cooper Kupp and Mike Evans with 51. ... Vikings OLB Za’Darius Smith is tied for the league lead with 8½ sacks and leads the league with 13 tackles for loss. ... Peterson is tied for third in the NFL with 10 passes defensed. ... Washington is looking to put together a four-game winning streak for the second consecutive season. ... The team is 5-2 in November since Ron Rivera took over as coach in 2020. ... Heinicke is starting a third game in a row in place of injured starter Carson Wentz. Heinicke has thrown for 480 yards, three touchdowns and two interceptions over the past two games. ... With rookie RB Brian Robinson Jr. taking over the lead running role, Antonio Gibson tied his career high with seven receptions and had 77 yards from scrimmage at Indianapolis. ... McLaurin has 11 catches for 186 yards and a TD since Heinicke became the starter. ... Allen ranks second among defensive tackles with nine tackles for loss this season. He had two against the Colts. ... S Bobby McCain had a season-high eight tackles last week. ... S Kam Curl has five-plus tackles in five of his six games this year.

FANTASY TIP: Hockeson's value went up with the trade from Detroit. Holcomb's injury and second-year LB Jamin Davis' inexperience combine to put a hole in the Commanders defense that Hockenson might be able to exploit in his first game catching passes from Cousins.