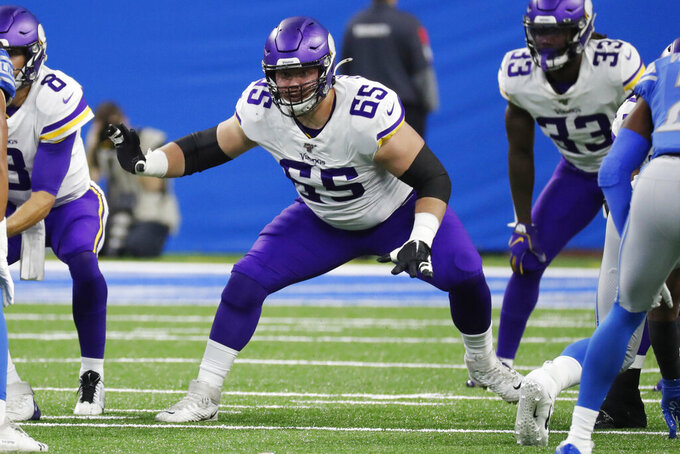 FILE - In this Oct. 20, 2019, file photo, Minnesota Vikings guard Pat Elflein (65) sets up to block during the first half of the team's NFL football game against the Detroit Lions in Detroit. The Vikings have placed starting right guard Elflein on injured reserve. The fourth-year player will miss at least three games. The Vikings did not disclose the injury for Elflein, who has not appeared on the injury report this season. (AP Photo/Rick Osentoski, File)

The Vikings did not disclose the injury for Elflein, who has not appeared on the injury report this season. NFL Network reported that Elflein hurt his thumb in practice on Thursday.

The Vikings play at Indianapolis on Sunday. Elflein is in his first season at right guard, after playing left guard last year and center his first two seasons.

With Dakota Dozier starting at left guard, the backup options for Elflein are especially inexperienced: Dru Samia and rookie Ezra Cleveland. Aviante Collins and rookie Kyle Hinton are the guards on the practice squad.