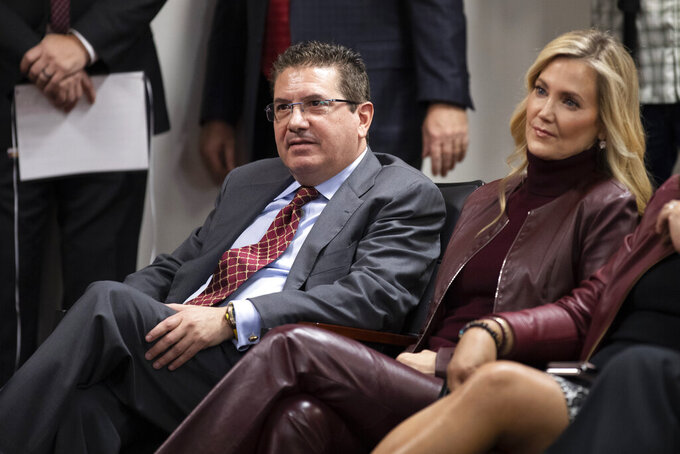 FILE - Washington Redskins owner Dan Snyder, left, and his wife Tanya Snyder, listen to head coach Ron Rivera during a news conference at the team's NFL football training facility in Ashburn, Va., in this Thursday, Jan. 2, 2020, file photo. The NFL has fined the Washington Football Team $10 million and owner Dan Snyder is stepping away from day-to-day operations after an independent investigation into the organization’s workplace misconduct. The team was not stripped of any draft picks as part of the league’s discipline that was announced Thursday, July 1, 2021. Snyder says his wife Tanya will be in charge for the next “several months.” (AP Photo/Alex Brandon, File)

Washington is next to last in the NFL in percentage of players to receive at least one dose of a vaccine and, as of Saturday evening, only Arizona with nine had more in league protocol. His team's lagging vaccination rate and the potential pitfalls of an outbreak have been a point of consternation for coach Ron Rivera, who is immune deficient after undergoing treatment last year for a form of skin cancer.

Rivera gave players a “what if” scenario that if this were the season opener Sept. 12 against the Chargers, even players added to the protocol that morning would be ineligible to play that game or against the Giants four days later.

“It brings the reality of the what the rules are, and I hope it helps,” Rivera said. "But these young men have to make their decisions.”

Just under 90% of NFL players have received at least one dose. Nine teams are at 95% of players in the vaccination process and just one is under 70%. Washington is not above that mark by much.

Scherff, reigning AP Defensive Rookie of the Year Chase Young, safety Landon Collins, quarterback Taylor Heinicke and tight end Logan Thomas all wore a mask when addressing reporters inside the team facility this week, a requirement for unvaccinated players. None of the three was willing to disclose his vaccination status.

Scherff joined his teammates on the field at the start of practice Saturday before being walked off. Sharpe was never on the practice field for the final workout in Richmond before heading back to the team's usual home base in Ashburn, Virginia, for the rest of camp.

Rivera, who wears a mask around unvaccinated players because of worries about his health, has expressed concerns about how virus-related absences will affect the team’s performance. Washington receiver Curtis Samuel, offensive tackle Cornelius Lucas, defensive lineman Matt Ioannidis and defensive back Chris Miller are also on the COVID-19 list.

“We’re hoping we can get some more guys vaccinated, but we’ll see,” Rivera said, citing appointments scheduled for players to get a vaccine dose Sunday after returning home. “It’s a difficult topic. I’ve tried to approach it with a lot of our players, talked to a lot of our guys that have it. It’s a personal thing, but we can sway them, hopefully.”

Washington put no players from the active roster on the COVID-19 list during the 2020 regular season or playoffs — only Ioannidis while on injured reserve and practice squad running back Javon Leake in November. According to rosters on team websites, Washington has more on it now than entire divisions combined.

“I don’t think it is going to impact our locker room," Collins said through a mask Friday. “They are the same rules we had last year. It is more strict, they are pushing it more, but at the same time we are not looking at it as a distraction. If you want to get the vaccine, that is your decision. If you don’t get the vaccine, it is your decision.”

Rivera said he hoped his immune deficiency was part of players' conversations about getting vaccinated. He has also spoken to players to make his case.

“They’ve listened,” he said. "I haven’t been blown off by anybody, which I really respect that because they’re willing to listen.”

Vaccinations are the front-burner issue for Washington but far from the only ongoing situation off the field. While the front office is in the midst of the renaming and rebranding process, Tanya Snyder has taken over day-to-day operations of the team for the next several months, with husband Dan focusing on the search for a stadium site and other business ventures.

She threw T-shirts and other souvenirs to fans during practice Saturday and addressed the crowd after — the kind of public interaction at a practice her husband has avoided in more than 20 years owning the team.

“I have been on the sidelines for 22 years, and I’m much more active and involved now with my husband,” Snyder said in her first public comments since being named co-CEO. “We couldn’t be more excited about our new leadership."