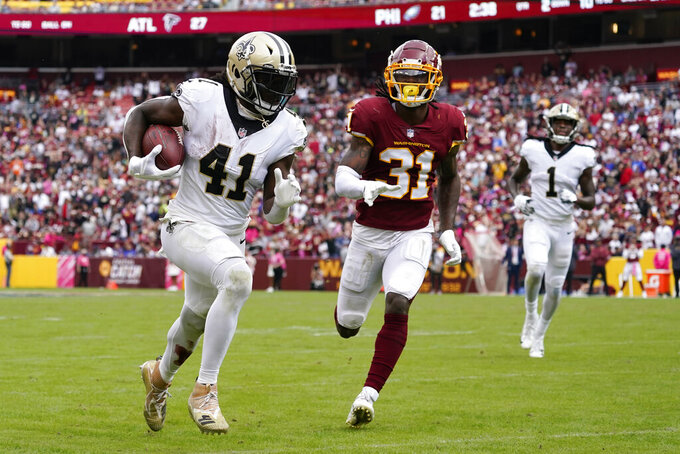 Ron Rivera bristled at the notion of taking over defensive play-calling or making any changes to his coaching staff Monday in the aftermath of Washington giving up 33 points in a loss to New Orleans.

Rivera said, “That stuff makes no sense to me” and insisted four or five plays made the difference in the loss that dropped his team to 2-3 on the season.

“I like what we did,” Rivera said. "I thought what we did last week gave us an opportunity, so at the end of the day, what we’re going to do is we’re going to continue to work guys. The only way you’re going to get better is to work in practice, practice hard, practice as best as you can, then you go out and you play.”

Jack Del Rio is in his second season as Rivera’s defensive coordinator in Washington. His unit ranked second in the NFL last season.

That led to some high expectations, yet Washington's defense instead has been among the worst in the league, allowing 408 yards and 31 points a game. Blown coverages cost Washington two touchdowns against the Saints, and a lack of preparation led to the successful desperation pass for a TD at the end of the first half.

“If you really go back and look at it, and this is probably the first time that I can really say that this was a matter of four or five plays on both sides of the ball,” Rivera said. “If we do certain things and eliminate a couple of things here, you’ll see that we have a chance.”

So, you're saying there's a chance? The urgency is definitely heightened with Patrick Mahomes and the Kansas City Chiefs coming to town Sunday and Aaron Rodgers and the Green Bay Packers up after that on the road next weekend.

“Coming into this game is there a concern? Absolutely,” Rivera said. "But we’re going to work and try and get ourselves ready so that we can handle those situation and circumstances.”

Finally, the kicking game. Dustin Hopkins made three field goals Sunday, and everyone got to see why Rivera has stayed with him: Cody Parkey missed two extra points in his first game with the Saints. This is Hopkins' job for the foreseeable future.

The defense is the glaring area of need, but there will be continued conversations between quarterback Taylor Heinicke and offensive coordinator Scott Turner about cleaning up some mistakes. Heinicke threw two interceptions against the Saints, while also completing 20 of 41 passes for 248 yards.

“You’re not going to be perfect, but you must keep going,” Heinicke said. “There is always room to improve.”

Ricky Seals-Jones made the most of his promotion to No. 1 tight end in the absence of injured starter Logan Thomas. Seals-Jones made five catches for 41 yards against the Saints, including an impressive grab along the sideline to keep a drive going.

William Jackson III signed a $40.5 million, three-year contract to become one of Washington's top cornerbacks. He has not been the only problem, but he and the rest of the secondary have been on the bad end of some easy completions by opponents because of missed assignments.

“I feel like we played better," Jackson said after the Saints game. "I’m not going to say we played worse, but obviously there’s things we got to work through and that we got to get fixed.”

Wide receiver Curtis Samuel's nagging groin injury crept up again Sunday and knocked him out of the game, so figure on him being questionable often, if not every week.

“He’s going to be on a week-to-week basis," Rivera said. “We’re just going to continue to be smart with it, and hopefully it’ll settle in and he’ll be ready to go.”

7 — Third-down stops Washington on the Saints' 11 opportunities, which is the defense's best performance in that situation this season and provides a glimmer of hope.

Hope Samuel and others can play Sunday in what could be a back-and-forth shootout against the Chiefs, who are also struggling defensively. The secondary also needs to shore some things up, or Mahomes will tear Washington's defense apart.