What does undefeated preseason mean for Shurmur and Giants? 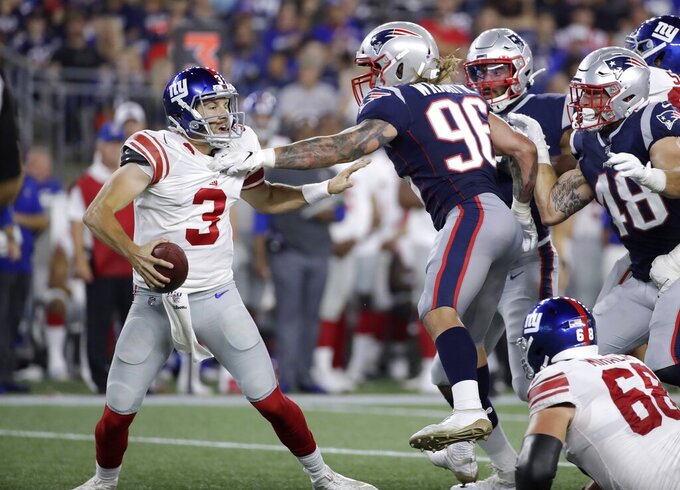 EAST RUTHERFORD, N.J. (AP) — It's tough to say what a perfect preseason means for the New York Giants in their second season of a rebuild under coach Pat Shurmur and general manager Dave Gettleman.

Perfection in meaningless games doesn't always carry over to the regular season.

The previous time New York was undefeated in the preseason was 2014. The regular-season mark was 6-10. It was one of six times in the past seven seasons the Giants have failed to make the postseason.

So what does this latest perfect preseason mean? It was one of three in the NFL this summer along with Buffalo and Baltimore.

The answer may not be in the record. It might be seeing how the team reacted after Kyle Lauletta threw a 14-yard touchdown to Alonzo Russell as time expired to give the Giants a 31-29 win over the Super Bowl champion New England Patriots on Thursday night.

The bench emptied on the field as if the team had won a playoff game after Lauletta executed a 15-play, 70-yard drive with no timeouts to rally New York from a 29-10 halftime deficit.

The feeling was certainly different than the past two years when New York won a total of eight games.

"I think, regardless of what that game meant, for the players involved, it meant that we won and the excitement of winning showed up," Shurmur said Friday before meeting with coaches and front office personnel to determine the 53-man roster to be submitted Saturday. "I think that there is something good to that."

Besides the record, the Giants have posted some impressive preseason statistics.

Daniel Jones, the No. 6 pick in the draft and the heir apparent to 38-year-old Eli Manning, was the NFL preseason leading passer with a 137.3 passer rating. He hit 29 of 34 for 416 yards and two touchdowns in showing he is ready should Manning be injured or falter.

If there was something the Giants (5-11) lacked last season, it was the ability to finish. New York lost eight games by seven points or fewer with the defense giving up the deciding points in the final 2:00 four times.

The defense gave up 87 points in the preseason, the fifth-worst among 16 NFC teams.

Still, the Giants won every game and winning is something players chase.

"I think that even though the preseason doesn't count, putting wins on the board and feeling that atmosphere, how the locker room is after the game, and showing that if you stay together and fight for the whole 60 minutes, it gives you the best possible chance to win the ball game," safety Jabrill Peppers said. "It definitely gives you things to build off of (and) things to coach on."

Tight end Evan Engram said there is a feeling of family on this team after a competitive training camp. He believes having a perfect preseason will carry over.

"That's definitely going to help us on Sundays because we put ourselves in those moments each and every day at practice," Engram said of the comeback. "We put ourselves in those moments in games and so when it's regular season and it really counts we are ready for it. We can trust each other and we can depend on each other, that's something that's different about the team that we can keep building on going into the season."

We will see. It all starts a week from Sunday in Dallas.

Just something to think about.