Wilson cleared by doctors, will start for Jets at Pittsburgh 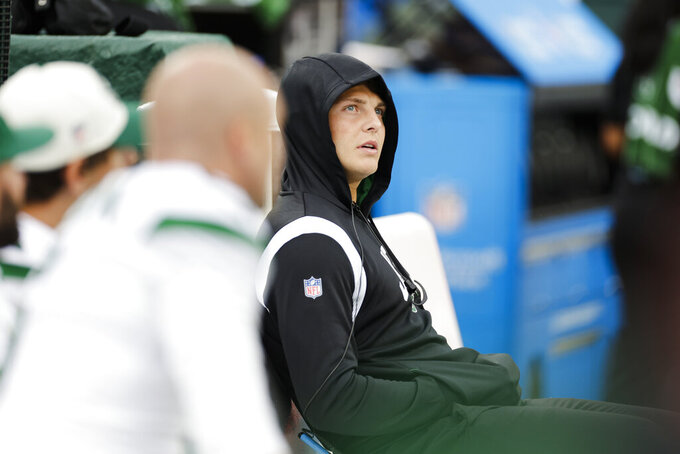 FLORHAM PARK, N.J. (AP) — Zach Wilson was back under center for the New York Jets, taking snaps and preparing to start for the first time this season.

“It's the happiest I've been in a month,” the second-year quarterback said with a big smile Wednesday.

Coach Robert Saleh announced Wilson will make his season debut at Pittsburgh on Sunday “if all goes well this week” at practice, six weeks after having knee surgery.

Wilson had been ramping up workouts in recent weeks, but Saleh said Monday the Jets were waiting for the quarterback’s doctors to clear him before making a decision about this week. Wilson was able to fully practice Wednesday as New York prepares for its game at Pittsburgh.

Wilson said he won't play with a brace or sleeve on his right knee, and insists he won't be thinking about it while he's out on the field. He also doesn't anticipate changing how he plays despite being injured in the preseason opener at Philadelphia on Aug. 12 because he was perhaps a bit too aggressive while trying to gain extra yards on a run.

“I'm full go and I'm going to be playing ball how I can,” Wilson said. “If somebody comes up, make somebody miss. Get out on the edge, extend plays when I need to.”

Wilson joked that he had the team's strength coach chase him around the field during practice to try to simulate the pocket breaking down and trying to avoid a pass rush.

“It's really just exciting for him to get back on the football field — it's been six weeks," Saleh said. “There's a lot of different things that have to go around in terms of making sure that we run an efficient offense. From us as coaches to the O-line to receivers running routes — everyone's involved.”

Joe Flacco started the first three games of the season, during which the Jets went 1-2 — including a stunning victory at Cleveland two weeks ago when they rallied from a 13-point deficit in the final 1:55.

But New York has struggled with consistency on offense and has held a lead for just 22 seconds — the final moments of the win against the Browns.

“It is exciting to get him back out there, but at the same time, it's not all about Zach," Saleh said. "It's making sure that we're executing on all cylinders, as we should every week.”

Wilson suffered a bone bruise in the preseason opener against Philadelphia on Aug. 12 and needed arthroscopic surgery to repair a torn meniscus. He was initially expected to miss two to four weeks, but the Jets insisted they wouldn’t rush Wilson back to the field.

“It's frustrating, but I think everyone kind of deals with injuries,” Wilson said. “It's kind of how you handle it, how you get back and how you prepare yourself to come back and still play well with missing some time.”

Saleh insisted there wasn't any added concern about bringing Wilson back while the Jets deal with questions on the offensive line. Starting left tackle George Fant was placed on injured reserve Tuesday, joining Duane Brown and Mekhi Becton on the sideline.

The 23-year-old Wilson is the focal point of a franchise looking to end an 11-year playoff drought — the NFL’s longest active skid.

After a rookie season that was marked by early struggles, a sprained PCL that sidelined him four games and a solid finish when he returned, Wilson is being counted on to take a leap in his progress.

He appeared more confident and accurate in training camp, especially in the two weeks before he was injured.

Saleh previously acknowledged the injury this summer was a setback for Wilson because he was missing valuable practice time and snaps in preseason games.

But the coach also said Wilson was taking mental reps throughout and wouldn’t need a ramp-up period before playing.

The Jets didn’t put Wilson on injured reserve so he could practice with the team while he worked his way back from the injury. He participated in 7-on-7 drills last week after practice with practice squad players and backups.

“The practice aspect was very important,” Saleh said. "We kept him engaged, he was fully involved in all the walkthroughs and the meetings, and was still able to get the extra work in, with regards to throwing and putting strain on the knee.

NOTES: LB Quincy Williams didn't practice after suffering a high ankle sprain last Sunday against Cincinnati. “He's doing a lot better,” Saleh said of Williams, who was carted off the field with what appeared an even more serious injury. ... CB Brandin Echols (hamstring) and DL John Franklin-Myers (toe) were limited at practice.