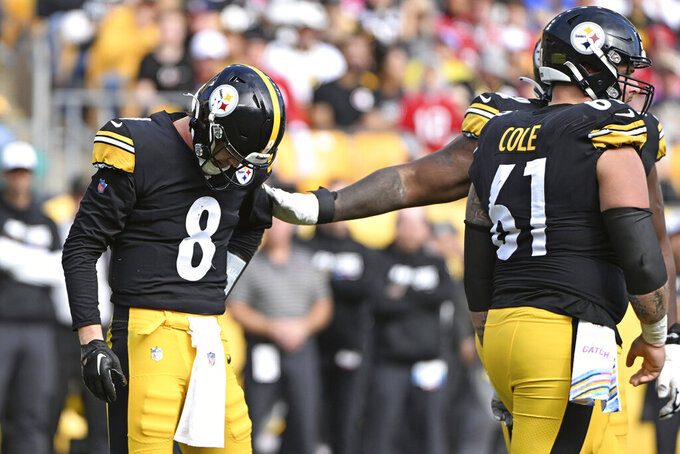 Pittsburgh Steelers quarterback Kenny Pickett (8) is helped on the field after being injured during the second half of an NFL football game against the Tampa Bay Buccaneers in Pittsburgh, Sunday, Oct. 16, 2022. (AP Photo/Barry Reeger)

PITTSBURGH (AP) — Mike Tomlin wasn't kidding when he said it would take more than one good performance to cure what's ailing the Pittsburgh Steelers.

Maybe, but it certainly beats the alternative: another week with offensive coordinator Matt Canada under siege and Pittsburgh's season spiraling downward.

The coach who loves to point out there's nothing “mystical" about the game he's dedicated his life to might want to reconsider that stance after one of the more trying weeks of his 16-year tenure.

How else to explain a 20-18 victory over Tampa Bay and Tom Brady on Sunday, which ended a four-game losing streak and offered something akin to hope, an element that threatened to disappear following the franchise's worst loss since 1989 the week before at Buffalo?

Yes, that really was Mitch Trubisky throwing for 144 yards and a touchdown in relief of Kenny Pickett, who entered the concussion protocol late in the third quarter after getting knocked to the ground by Tampa Bay's Devin White.

Yes, that really was embattled linebacker Devin Bush breaking up a 2-point conversion attempt that would have tied the game with 4:38 to go.

Yes, that really was rookie tight end Connor Heyward chugging downfield on a 45-yard catch and run that set up Trubisky's 6-yard dart in the end zone to a suddenly visible Chase Claypool.

Yes, that really was a defense that had generated little pass rush without injured star linebacker T.J Watt sacking Brady twice and repeatedly making him look every bit of 45 years old.

“We all put it out there, put everything aside and just played together,” said safety Terrell Edmunds, the only starting member of the secondary who played and who frequently threw his 6-foot-1, 217-pound frame into the ever-churning legs of the 228-pound Fournette.

Edmunds' play mirrored that of his team. The Steelers were fearless as 10-point home underdogs, most notably Trubisky. Given a chance to resurrect his career in the offseason, Trubisky's tentative play led to his benching after just 3 1/2 games.

It looked like more of the same when he replaced Pickett. Pittsburgh generated little on Trubisky's first two drives before coming alive in the fourth quarter.

Three times in the final 15 minutes Trubisky converted third-and-longs, including a 14-yard strike to George Pickens that got the offense going and a 26-yard flick down the sideline to Claypool that effectively allowed the Steelers to run out the clock.

Pickett's status for next week is uncertain. If Trubisky can channel whatever he found late against one of the NFL's best defenses, Pittsburgh's season might not look as dismal as it appeared a week ago, even at 2-4.

“We’re still in work mode, still in grind mode,” Edmunds said. "Everybody is still focused and we’ve still got a lot to prove.”

The “Hi, my name is” defense. Three of Tampa Bay's four trips inside the Steelers 20 ended with a field goal instead of a touchdown. Brady averaged 5.5 yards per attempt and didn't complete a pass longer than 28 yards. Not bad for a secondary that included two players — Quincy Wilson and Elijah Riley — who were on the practice squad on Saturday.

The running game. If there was a sliver of progress in Najee Harris' 12-carry, 42-yard performance, it may be that he had runs of 8, 6 and 5 yards in the fourth quarter, including a rare direct snap on the play before Trubisky's touchdown pass to Claypool.

Wide receiver Steven Sims gave the return game a needed boost. He raced 89 yards with the opening kickoff of the second half, setting up a field goal, and added a 24-yard punt return late in the third quarter that allowed Pittsburgh to flip the field.

Left guard Kevin Dotson's rough afternoon included being called for three penalties and forcing Tomlin to call timeout in the first half because he headed to the bench rather than stay on the field to block for the field-goal unit, which he has been part of all season.

For a week, anyway, Pittsburgh's defense escaped a game relatively unscathed. There's hope some members of the starting secondary — namely safety Minkah Fitzpatrick — will be back soon.

4 — The number of victories the week following a loss in which the Steelers trailed by at least 28 points since the start of the 2021 season, a testament to their resiliency and Tomlin's hold on the locker room.

Head to Miami for the first time since 2016 next Sunday night, where one of the subplots will be Brian Flores' return to South Florida. Flores, now a senior defensive assistant with Pittsburgh, was fired by Miami at the end of last season. His dismissal kickstarted a process that ended with Flores, who is Black, suing the NFL over alleged racist hiring practices.