A year after Olympic gold, US curlers reflect on success 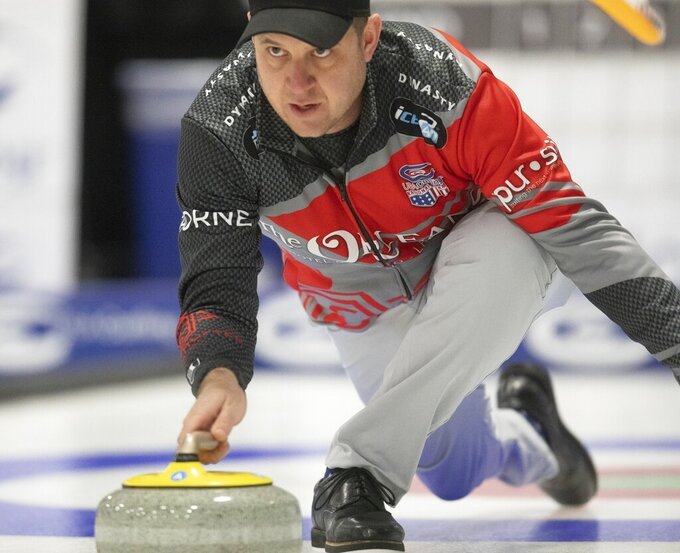 FILE - In this Feb. 9, 2019, file photo, John Shuster delivers a stone during the 2019 USA Curling Nationals at Wings Event Center in Kalamazoo, Mich. Nearly a year has passed since he won gold in South Korea, and Shuster can still smile about his transformation from obscure curler to Olympic sensation. The past 12 months have certainly been eventful for him and his teammates. (Emil Lippe/Kalamazoo Gazette via AP, File)

KALAMAZOO, Mich. (AP) — Nearly a year has passed since he won gold in South Korea, and John Shuster can still smile about his transformation from obscure curler to Olympic sensation.

"It's a lot of pinch-yourself kind of days," he said.

Shuster is back on the ice this week, competing at the USA Curling National Championships. His team also includes two of his fellow gold medalists from 2018 — John Landsteiner and Matt Hamilton — and in a way, this event represents a return to normalcy for them all. The past year has been unlike any they've experienced before, an opportunity to celebrate their memorable victory and promote their sport.

"We went everywhere across the country. All summer, we were doing a lot of things — California to New York, in between," Landsteiner said. "Barely any time at home. I think, before this event, I was home for two weeks in a row, and it was the most I've been home in a year and a half."

The gold medal at the Pyeongchang Olympics capped a remarkable run for the much-maligned Shuster, a Minnesota native who won bronze at the 2006 Olympics but was spurned when he applied for the U.S. high performance program after the 2014 Games in Russia. Undeterred, Shuster put together a team good enough to make it to South Korea last year, and when the Americans beat Sweden for the gold medal, it was one of the highlights of the Olympics for U.S. fans.

Curling isn't a mainstream Olympic showcase like hockey or figure skating, but it certainly has a niche among viewers who enjoy its quirks — and the relatability of the competitors. After returning home, Shuster's team rang the opening bell at the New York Stock Exchange and was honored at an outdoor NHL game in Annapolis, Maryland.

Shuster recalls playing in a celebrity golf tournament with some other Minnesota athletes — and discovering that he had a parking space reserved for him.

"I remember pulling into the parking lot, I parked my car and I went walking by. I was like, oh, the top 10 people all have their own car parking spots, their names on it. As I was walking, it was like, Jason Zucker, Adam Thielen, Kyle Rudolph, John Shuster," he said. "I'm like, wait a minute, I had a parking spot! There was like, probably 40 NHL and NFL players that were at this tournament, and there was only 10 people that had parking spots, and I was one of them."

When an American team exceeds expectations at the Olympics the way Shuster's did, a sport like curling has an opportunity to capitalize. Although the U.S. is a ways away from any kind of curling boom, there's some evidence that the game is growing.

"Our local club here has gone from around 90 members to over 150, literally since the Olympics," said Garnet Eckstrand of the Kalamazoo Curling Club.

"They made this insane run, and it really was like, dude, that's awesome," Allen said. "The coolest part about it is, you can see the confidence clicking. Now when I watch them play . they know they can beat everybody."

Allen and Roos have actually been competing at nationals in Michigan this week, although not on the same team. Shuster's group, not surprisingly, will play for the title Saturday after mostly rolling through this tournament. The team's game Thursday — a 9-0 victory — was so lopsided that the opponent conceded before the halfway point.

Last year, Shuster's team didn't compete at nationals — the tournament was around the same time as the post-gold medal victory tour. That's not an issue this time around. There are more goals ahead for Shuster and his teammates — they have an Olympic title to defend, after all.

But even as they focus on the future, these American curling celebrities still have plenty of appreciation for what they've already accomplished.

"It's been pretty incredible to see the uptick in interest, just based on us maybe winning a gold medal, but also not all that surprising," Shuster said. "Curling has a way of hooking you, when you give it a legitimate try."