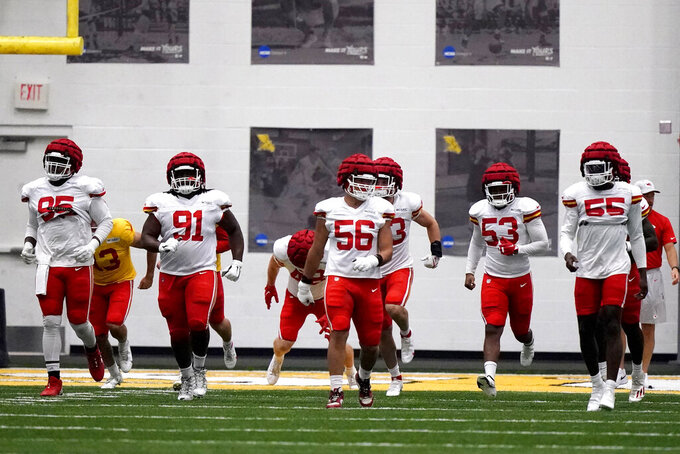 KANSAS CITY, Mo. (AP) — Carlos Dunlap went through his first training camp practice with the Chiefs on Thursday, then the two-time Pro Bowl defensive end made it perfectly clear both why he signed with Kansas City and his goals for this season.

The why: The Chiefs are giving the 33-year-old veteran an opportunity to play every down, rather than as a third-down pass-rushing specialist, which is the role Dunlap had been increasingly relegated to the past couple of years.

The goals: Dunlap is aiming for at least eight sacks, which would push him well over 100 for his career, along with making a run to the Super Bowl after having lost his first six playoff games with Cincinnati and Seattle.

“Great opportunity with a great organization,” said Dunlap, who signed an incentive-laden contract last week that could be worth up to $8 million this season. “What they've done the last few years, playing against them on the other side of the ball — I wanted to add my specialty to it. We felt like we had mutual interest.”

There were a few other teams in the running, Dunlap said, “but I liked what I heard from the Chiefs.”

The Chiefs like what he brings to the locker room.

Dunlap has been a paragon of consistency since entering the league as the Bengals' second-round pick in 2010.

He's had at least six sacks every season but one, including 8 1/2 last season with the Seahawks, and appeared in at least 14 regular-season games each of the past 10 seasons. And while sack totals have only been official since 1982, his 96 sacks rank just outside of the top 50, which is the threshold he would pass with his goal of eight this season.

It's not just what Dunlap brings in terms of productivity that made him so attractive, though. He's been around the league long enough to build a vast bank of knowledge that he can impart on some of the Chiefs' younger players.

Tops on the list is George Karlaftis, one of their two first-round picks in this year's draft.

“He's going to add a lot of value just from a teaching standpoint, just for us young guys,” Karlaftis said. “Aside from all the wonderful things he'll do on the field, just teaching us and spreading the wealth of knowledge he has will be big.”

The Chiefs had just 31 sacks last season, better than just three other NFL teams, and their inability to pressure Cincinnati quarterback Joe Burrow was a big reason for their second-half collapse in the AFC championship game.

Karlaftis is expected to help solve those pass-rush woes, but it's a lot to expect of a rookie to do it alone. And while the Chiefs hope for more from Frank Clark, whose 4 1/2 sacks last season were a bitter disappointment, there still existed plenty of room for a proven disruptive force such as Dunlap coming off the edge.

“We established communication with Carlos back in March, I guess, when he got released,” Chiefs general manager Brett Veach said, “and we were happy to get that done, and we think he's going to be a valuable asset to our rotation.”

The Chiefs have had some success bringing in older pass rushers.

Terrell Suggs played well down the stretch during the 2019 season, appearing in three playoff games and helping the Chiefs win their first Super Bowl title in 50 years. Then last year, Melvin Ingram arrived in a midseason trade and had two sacks in three playoff games while helping Kansas City reach its fourth consecutive AFC title game.

Unlike those two players, the Chiefs expect Dunlap to help them beginning with their Week 1 game in Arizona.

“He's done it for a long time,” Chiefs defensive coordinator Steve Spagnuolo said, “and the system he was in Cincinnati for all those years was conducive to him. ... He knows how to get to the quarterback, and sometimes that's innate. I always say 70 percent of pass rushing is want-to and he has that.”

Notes: OT Prince Tega Wanogho was a full participant in Thursday's practice after beginning camp on the PUP list. CB Rashad Fenton (shoulder) and OT Lucas Niang (knee) remain on the list. ... WR Daurice Fountain missed the workout with a groin injury. ... WR Gary Jennings is in the concussion protocol after slamming into one of the garage doors of the indoor practice facility while trying to make a catch in Wednesday's workout. ... The Chiefs are off Friday before resuming camp this weekend.