Agnew questionable for Jags against Broncos in London 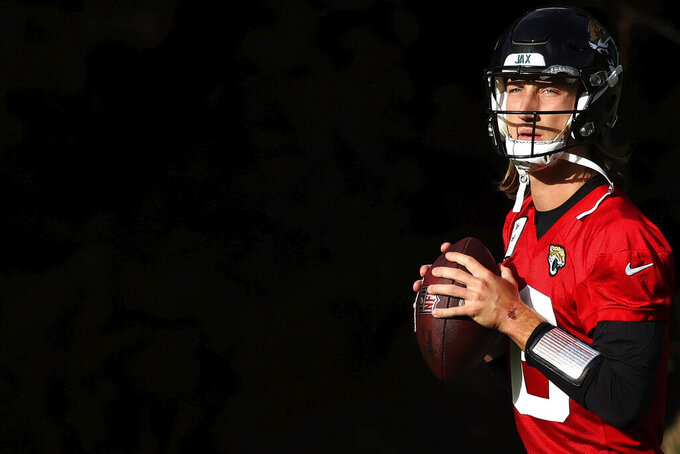 Jacksonville Jaguars quarterback Trevor Lawrence (16) concentrates during a practice session at The Grove in Watford near London, Friday, Oct. 28, 2022. The Jacksonville Jaguars will take on the Denver Broncos in an NFL regular season game on Sunday at Wembley Stadium in London. (AP Photo/Ian Walton)

Agnew, who missed last week's 23-17 loss to the New York Giants because of a knee injury, was limited in practice Friday and his game status is questionable.

“We are going to try to push him one more day, tomorrow, see where he's at,” coach Doug Pederson said after practice.

Three Jaguars players did not make the trip to London — all listed as “non-injury related.” They are CB Tevaughn Campbell, S Tyree Gillespie and DL Adam Gotsis.

Of the three, Gotsis has had the most playing time though the seventh-year backup was inactive last week when the Jags went with a run-heavy front. He has 1.5 sacks this season.

Gotsis was born in Australia; Campbell in Canada.

The Jaguars would not comment on why the players didn't make the trip.

The Giants' Scottish punter Jamie Gillan had to stay in Britain for three extra days after New York's 27-22 win over the Green Bay Packers earlier this month. Gillan attended college in the U.S. but hadn't switched to a work visa when he got a job in the NFL.

Campbell was signed from the practice squad on Thursday. The Jags claimed Gillespie off waivers in August.

Gotsis became the highest-drafted Australian-born player in NFL history when the Broncos selected him in the second round, 63rd overall, in the 2016 draft.