Analysis: NFL's very rich owners about to get much more rich 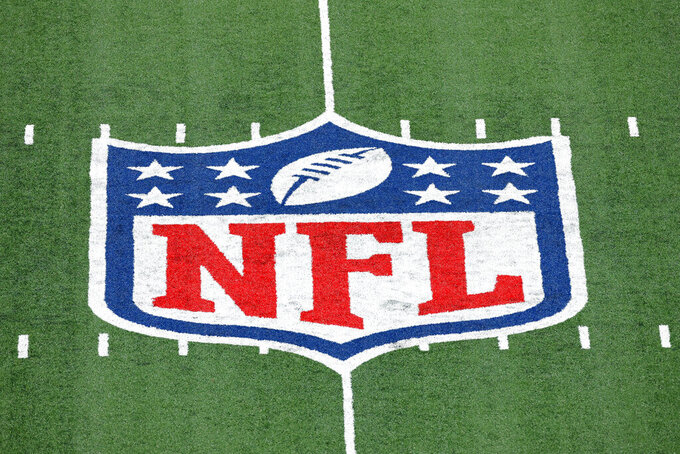 FILE - In this Nov. 2, 2020, file photo, the NFL logo is displayed at midfield during an NFL football game between the Tampa Bay Buccaneers and the New York Giants in East Rutherford, N.J. There are some very rich people about to get a whole lot richer. Who else but NFL owners? Probably within the next week, those 32 multi-millionaires/billionaires will see their future earnings increase exponentially. The league is on the verge of extending its broadcast deals with its current partners, and with a new full-time rights holder in Amazon likely acquiring streaming rights. (AP Photo/Adam Hunger, FIle)

There are some very rich people about to get a whole lot richer. Who else but NFL owners?

Probably within the next week, those 32 multi-millionaires/billionaires will see their future earnings increase exponentially. The league is on the verge of extending its broadcast deals with its current partners, and with a new full-time rights holder in Amazon likely acquiring streaming rights.

The astronomical numbers figure to double in many cases, displaying once more that despite a pandemic, lower ratings for the 2020 season, and the waves of viewers finding alternate ways to watch games, the NFL is the most desirable of all commodities for broadcasters.

“There is so much interest in the NFL coming back in broadcasting and digital and all the ancillary programming and fantasy leagues and sports gambling," says Marc Ganis, co-founder of Chicago-based consulting group Sportscorp and a confidant of many NFL owners. "Nobody wants to leave the NFL right now.”

That's particularly evident when it comes to television. Though the networks, mainly Disney-owned ESPN/ABC, may have balked at the rights fees the NFL is seeking over the next decade, they also pretty much are swallowing hard and ponying up.

ESPN spent the most in the current deal at $1.9 billion annually — increased to $2 billion once it got a wild-card playoff game. That provided it the Monday night showcase and the playoff representation. The league is eager for some of the Monday nighters to land on free-to-air ABC, while Disney is even more eager to get back into the Super Bowl mix on ABC.

The price tag probably won't approach $2 billion per season, but it will increase substantially. And only ESPN's deal ends after the upcoming season; the rest go through 2022.

Fox currently has a Sunday afternoon package of primarily NFC games and the Thursday night package at $1.76 billion per year. Amazon — with cable's NFL Network, owned by the league — is in line to grab the prime-time portion, but Fox's fee for the Sunday games could double from $1.1 billion.

CBS, which once had the Thursday night package, is paying $1 billion a year for the Sunday afternoon AFC-dominated telecasts and also seems headed for doubling that.

NBC, which has next February's Super Bowl — potentially in the middle of the Winter Olympics that the network also broadcasts — has been paying $950 million a year for the prized Sunday night deal. That, too, could double in rights fees.

Amazon's buy-in is projected in the $1 billion range. And then there's the DirecTV Sunday Ticket package of out-of-town telecasts, which is at $1.5 billion annually and figures to jump to $2 billion or so — with several bidders lined up.

Why is the league so eager to get the broadcast extensions done now? The NFL's business year begins March 17.

Well, most stadiums were fully empty for all of 2020, and team expenses skyrocketed during the pandemic-impacted season. The loss of incoming revenues means a reduced salary cap this year (to about $183 million), and would have heavily impacted future caps without the upcoming tidal wave of rights fees profits.

There's also the financial security the new contracts will provide. Not that Jerry Jones or Robert Kraft needs to worry where his next dollar is coming from. But they soon will know where their next millions of dollars are coming from.

The players, who wisely agreed to a new labor deal a year ago before the COVID-19 pandemic hit full force, will see the fruits of that pact throughout the decade. Not this year, when the new broadcast deals won't have much effect. But definitely down the road paved with gold.

And despite how much they will be shelling out, the broadcast partners will benefit. Just look at the TV ratings for 2020, the newsiest of years with the pandemic; a stormy presidential election campaign and aftermath; and a racial and social awakening in America. Yes, the number of eyeballs watching on television dropped for the NFL, but the league still brought in an average of 15.6 million television and digital viewers during the regular season, according to the league and Nielsen.

As general managers or coaches like to say after making a trade, “It's a win/win for everyone.” In this case, that's almost certainly true.