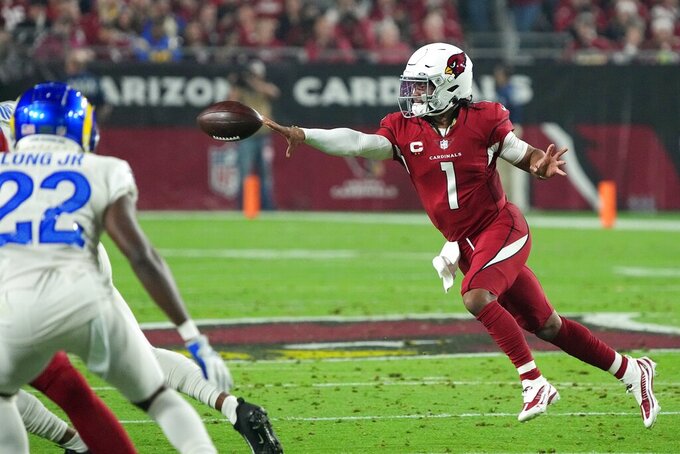 Arizona Cardinals quarterback Kyler Murray (1) tosses the ball to a teammate as Los Angeles Rams defensive back David Long (22) looks on during the first half of an NFL football game Monday, Dec. 13, 2021, in Glendale, Ariz. (AP Photo/Rick Scuteri) 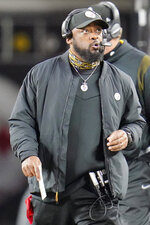 If your team is not in the NFL playoff race heading into the final four weeks of the schedule, well, that team must be pretty bad.

Except for the Lions, Texans, Jaguars, Bears and the two New York teams (Rotten Big Apple, indeed), everyone else remains in the conversation for the postseason. Division races in many cases aren't so much in question, but the wild cards are so uncertain that the likes of Seattle (5-8) and a slew of 6-7 clubs can't be ignored.

That's exactly what the league wanted when it added a 17th game and, more specifically, a third wild card in each conference.

Not that everybody is looking at the big picture and assessing their chances.

“I do not care,” Steelers coach Mike Tomlin said. “My agenda is the Pittsburgh Steelers. I didn’t waste any of my time this weekend pondering that perspective. I was just looking at our place in this fray and the things that we’re capable of getting accomplished.”

There's little doubt who will win three of the divisions, with Green Bay (10-3), Tampa Bay (10-3) and Dallas (9-4) all in position to clinch this week. The Cowboys could be challenged a bit if they stumble at the Giants — don't bet on it — and the Eagles knock off Washington on Sunday.

Out West, it's a two-team contest between the Cardinals (10-3) and Rams (9-4), who beat Arizona on Monday night. Both are in excellent shape to get into the playoffs.

"It’s all in front of us right now,” Cardinals quarterback Kyler Murray says.

Home-field advantage hasn't been much of an edge across the NFL this season, and the Bucs proved last year it's no big deal to go on the road throughout the postseason, particularly for the conference title game, winning at Green Bay in January. But the one available bye and week off could be huge after the extension of the schedule to 17 games.

As for the wild-card scramble, it truly is a wild scramble. Heading into Week 14, the Rams and 49ers (7-6) are in the best spots, followed by all those 6-7 teams: Washington, Philly, Minnesota, Atlanta and New Orleans.

Does anyone have an edge? Considering how inconsistent they all are, probably not.

Buffalo's collapse has handed over the AFC East to New England — yes, the Patriots (9-4) are contending even without Super Bowl mainstay Tom Brady. The Bills (7-6) suddenly are looking around the conference landscape to gauge where they stand in the wild-card race that also includes the entire AFC North, plus the Colts, Broncos and Chargers. Maybe even the Dolphins, who have gone from 1-7 to 6-7.

The Titans (9-4) have a two-game lead over Indianapolis (7-6) in the South and won both meetings. But the Colts have made a remarkable surge from a 1-4 start behind the spectacular work of running back Jonathan Taylor, and a playmaking defense that got healthier.

Kansas City's sizzling finish on Thursday night after three periods of mediocrity against the Chargers stamps the Chiefs — when operating at full efficiency — as a team to fear. But they can't afford any missteps as they take on three playoff contenders in Pittsburgh, Cincinnati and Denver to close out the schedule.

“We didn’t win those games kind of at the early part of the year,” Chiefs quarterback Patrick Mahomes said, “but we always had the confidence that we knew we had the guys in the locker room to win them. I think we’re still building on trying to become great, but I think we got the guys to do it, so I’m excited for these last few weeks and the playoffs. “

The North is such a garbled tangle that any of the four teams — Baltimore (8-5), Cincinnati (7-6), Cleveland (7-6) or Pittsburgh (6-6-1) — could win it. And the other three might wind up with an early vacation should Buffalo, Indianapolis and one of the West teams close strongly.

The immeasurable factor in all of this is how the coronavirus will impact the schedule, teams' rosters and the quality of play. The clubs that advance into the postseason might be the healthies and not necessary the most talented.

One thing is certain amid all the uncertainty: When the NFL flexes two finales in Week 18 from Sunday to Saturday, those games will have major postseason implications.