Anderson confused after being sent off during Panthers' loss 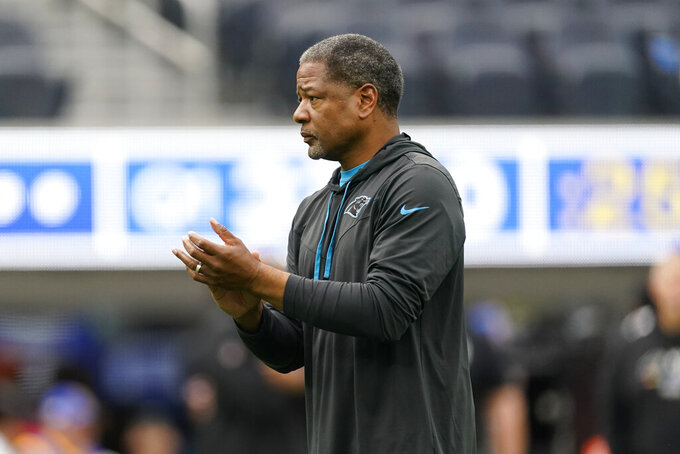 INGLEWOOD, Calif. (AP) — Robbie Anderson walked out of the locker room wearing a jacket that said “Lover Boy” on the back. When it comes to matters between the Carolina Panthers wide receiver and his coaches, things appear to be far from hunky dory.

Anderson was sent off the field and into the locker room by coach Steve Wilks during the second half of the Panthers' 24-10 loss to the Los Angeles Rams on Sunday.

Wilks, named the team's interim coach after Matt Rhule was fired last Monday, did not elaborate on why he made the decision to end Anderson's day early.

“It was a sideline-type situation and that's something we will discuss as we further get into the week,” Wilks said.

Anderson was close with Rhule. The seventh-year receiver played for Rhule in college at Temple, and signed with the Panthers in 2020 when Rhule became coach.

During the first half, Anderson got into an argument with receivers coach Joe Dailey. He was on a stationary bike early in the third quarter before sitting alone on a cooler.

Anderson came off the field late in the third quarter when he again exchanged words with Dailey. That was the last straw for Wilks, who got between the two and banished Anderson to the locker room.

Anderson said he wasn't happy being taken out on third down and expressed his displeasure.

“It's third down, it's a money down. I don’t think I should be okay with that (being taken out),” Anderson said. “So I made a comment on why I was taken out.

“Honestly, I was confused because I have never been told get out of the game. And, you know, upset by that. Nobody that is a true competitor would be OK with that."

Instead of quickly leaving the locker room or refusing interviews, Anderson decided to address things from the podium in the postgame interview room. Both Wilks and Anderson said they had not talked after the game.

“I don’t want anyone to have misconceptions. I’ve had moments of controversy where I didn’t speak up for myself,” Anderson said.

Anderson had been in for 89% of the Panthers' plays during the first five games, second most among the team's receivers. After having five catches for 102 yards, including a 75-yard touchdown, in the opener against Cleveland, Anderson had only eight catches for 104 yards.

Anderson though was a non-factor against the Rams. He was not targeted on any of his 23 snaps as Wilks devoted most of his game plan to getting running back Christian McCaffrey involved since third-string QB PJ Walker got the start due to an ankle injury to Baker Mayfield.

McCaffrey, who along with Anderson has been the subject of trade rumors, did not address what happened on the sidelines because he said he did not see it.

Wilks tried to keep shift focus back on the rest of his team. He did not address Anderson's future when asked if the receiver would play next week against Tampa Bay.

The Panthers (1-5) have dropped three straight.

“You know everybody is being evaluated, as well as myself. So we've got to figure out what’s going to be the right chemistry to put out on the field,” Wilks said. “And, most importantly as coaches, we got to come up with the right game plan.”