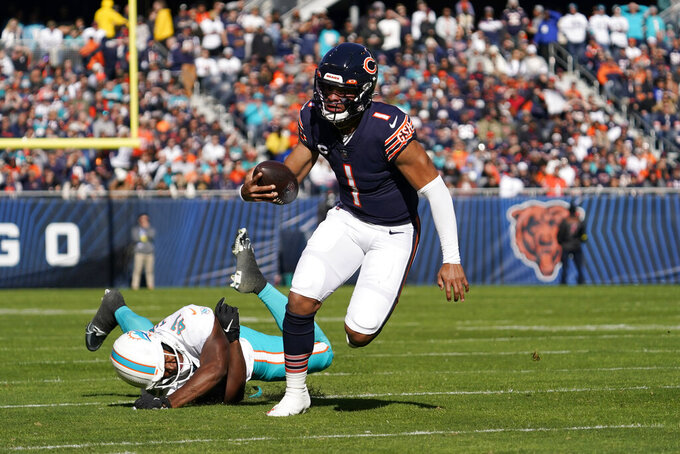 It was an impressive list: Lamar Jackson, Deshaun Watson and Jalen Hurts.

Campbell sees a little bit of each of them in Fields, and he'll get an up-close look when the Lions visit the Bears on Sunday.

“Quarterback driven runs, guard-tackle pulls, read the end, hand it off, these backs are running hard, they’re downhill,” he said. “And then, there’s enough of the keepers off of it. There’s enough misdirection to the receivers. And then, certainly his ability on third down, that’s where they really got Miami was man, there’s a number of third-and-8, third-and-10 ... there’s an opening in there and he takes it and he’s gone.”

The Bears (3-6) come in with five losses in the past six games. But the big story is Fields' improvement.

He's making a case he just might be the one to nail down a position that has historically been a weak spot for one of the NFL's founding franchises. He had already strung together several encouraging performances in a row — and then came the game against Miami last week.

Though the Bears lost 35-32, Fields put on a show, running for 178 yards. It was the highest rushing total for an NFL quarterback in a regular-season game since at least 1940. But there was more. Fields also became the first player since at least 1950 with at least 150 yards rushing and three touchdown passes in a game.

In the past five weeks, he has thrown for 851 yards, completing 76 of 120 passes, with eight TDs and two interceptions. He also has run for 455 yards and three TDs in that time.

Fields leads the Bears in rushing with 602 yards and is averaging 6.6 per attempt. Only Jackson is running for more yards per carry.

“The experience has really led him to take the next step,” coach Matt Eberflus said. “But also, as I think we’re learning him and he’s learning the offense, it’s kind of both. So we’re tailoring it to him more, but he’s also learning the scheme at the same time.”

The Lions (2-6), meanwhile, had lost five in a row before beating Green Bay 15-9 last week. They intercepted Aaron Rodgers three times and hung on when he threw an incompletion on fourth down at the Detroit 17 in the final minute.

Even so, the Lions are in a familiar spot. They're last in the NFC North and on course to finish with a losing record for the 18th time in 22 seasons.

The Lions haven't strung together back-to-back wins since October 2020, when they beat both Jacksonville and Atlanta on the road under former coach Matt Patricia.

“A lot of life is about momentum and momentum is a big deal in sports,” receiver Amon-Ra St. Brown said. “If we win this one, it will give us momentum and positive energy moving forward.”

Bears receiver Chase Claypool is ready to start showing more of what he can do now that he has had a week to adjust to his new surroundings.

Chicago acquired him from Pittsburgh before last week's trade deadline, giving Fields a downfield threat and maybe giving the offense more balance. The Bears lead the NFL in rushing and rank last in passing.

“We’re figuring out what routes are good, what concepts are good,” he said. “What run plays are good, stuff like that, in terms of the blocking scheme to get more and more comfortable and see what’s good.”

Claypool caught two passes for 13 yards against Miami, giving him 324 in nine games. He had 860 yards last season and 873 as a rookie with the Steelers in 2020.

Fields and Detroit quarterback Jared Goff figure to have all the time they need. The Lions are tied with Atlanta for second-worst in the NFL with 12 sacks, and the Bears are just about right there with them with 13.

The Bears joined the 1976 Pittsburgh Steelers as the only teams in the Super Bowl era to run for at least 225 in four straight games. They are the first since New England in 1978 with at least 200 in four consecutive outings.

Besides Fields, the Bears have also been getting big contributions from Khalil Herbert. He has 586 yards and averaging 6 per attempt.