Both QBs try to rebound when Ravens host Cleveland 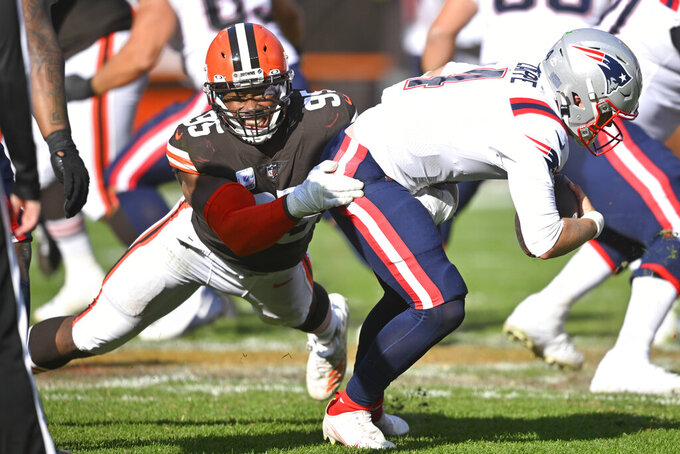 OPENING LINE: Ravens by 6, according to FanDuel Sportsbook.

TURNOVER DIFFERENTIAL: Browns minus-3; Ravens plus-4.

BROWNS PLAYER TO WATCH: QB Jacoby Brissett. Coming off his worst game of the season, Brissett needs to bounce back before Cleveland's season completely unravels. He threw an interception on his second pass last week and had three turnovers. Following the game, he gave an impassioned speech to his teammates about holding each other accountable.

RAVENS PLAYER TO WATCH: QB Lamar Jackson. He's always a player worth watching, but this week in particular he needs to rebound from a couple of late turnovers that helped the Giants rally past Baltimore last weekend.

KEY MATCHUP: Browns RB Nick Chubb vs. Baltimore's defensive front. Chubb enters this week leading the league in rushing, and that helps take some pressure off Cleveland's inconsistent quarterback play. The Ravens' biggest defensive struggles, however, have come against the pass.

SERIES NOTES: The Ravens have dominated, winning 22 of the past 27 matchups. ... Baltimore coach John Harbaugh is 23-5 vs. Cleveland.

STATS AND STUFF: The Browns are entering a difficult stretch of games, with three of the next four on the road. ... Cleveland leads the NFL in rushing, averaging 172 yards per game. ... Teller's injury is the most severe, but Cleveland's O-line is dinged up with LG Joel Bitonio (biceps) and RT Jack Conklin (ankle) both hobbled. ... Chubb's 649 yards rushing lead the league, but he was held to 56 last week on a season-low 12 carries by the Patriots, who stacked the line of scrimmage and forced the Browns to throw. ... Chubb has 43 rushing TDs, one shy of Hall of Fame QB Otto Graham for fifth on the team's career list. Jim Brown leads with 106. ... Garrett (63 1/2) had two sacks last week and passed Clay Matthews (62) for the most in club history. ... WR Amari Cooper leads the Browns in receptions (31), yards (348) and receiving TDs (four). ... The Browns cleaned up some defensive issues last week, but gave up 309 yards passing to rookie Bailey Zappe. ... Browns rookie K Cade York made three FGs last week after missing two one week earlier. ... On their visit to Baltimore last season, the Browns intercepted Jackson four times (a career high) and still lost. ... The Ravens blew double-digit leads in the second half of all three of their defeats this season. They have been outscored 64-22 in the fourth quarter. ... Baltimore has scored first in all six games. ... The Ravens are averaging an NFL-best 6.8 yards per play on first down. ... Baltimore has led for a league-best average of 44:35 of game time, while trailing for a league-low 2:09. ... Jackson can set an NFL record this week with his sixth consecutive game with at least 50 yards rushing and a touchdown pass. ... Baltimore K Justin Tucker has made 61 consecutive FG attempts in the fourth quarter and OT. ... Ravens TE Mark Andrews has nine career 100-yard receiving games, tied with Mark Clayton for the most in team history. Andrews has 455 yards receiving this season, tied with Kansas City's Travis Kelce for most among TEs.

FANTASY TIP: Baltimore's defense might be a solid play. The Ravens have forced at least one turnover in eight straight games, the NFL's longest current streak, and have 16 takeaways during the span.