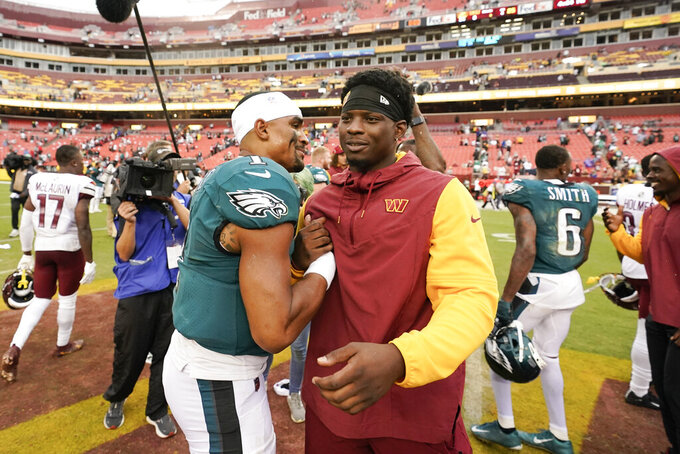 Philadelphia Eagles quarterback Jalen Hurts (1) stops to greet Washington Commanders injured running back Brian Robinson Jr., at the end of an NFL football game, Sunday, Sept. 25, 2022, in Landover, Md. Eagles won 24-8. Robinson was shot twice during an attempted carjacking in Washington on August 28th and has to miss the first 3 games of the season. (AP Photo/Alex Brandon)

Brian Robinson Jr. has been cleared to practice with the Washington Commanders just over five weeks since being shot in an attempted robbery, and there's a chance he plays as soon as this weekend.

Robinson on Wednesday is expected to begin his acclimation period to return from the non-football injury list. The team then has 21 days to activate the rookie running back, but that could happen in time for him to face the Tennessee Titans on Sunday.

Robinson was shot twice in the right leg Aug. 28 in Washington, was taken to a hospital, underwent surgery and was released a day later. The bullets missed all the major ligaments and bones in his knee.

Rivera does not anticipate Robinson will have any limitations on the practice field, but wants to wait to see that unfold before jumping to conclusions.

“We’ll see how he reacts to contact because we will have padded practice on Wednesday,” Rivera said. "He’ll get to bump around a little bit and see how he handles that, and then we’ll go from there.”

Robinson, a third-round pick out of Alabama, impressed so much in training camp and the preseason he was expected to win the starting job.

After he was injured in the shooting, that fell to incumbent Antonio Gibson, who has averaged just 3.3 yards a carry so far this season behind a banged-up offensive line.

Rivera said the Commanders, who have lost three in a row after winning their season opener, have a plan for how to use Robinson, Gibson and third-down back J.D. McKissic moving forward.

“Hopefully we get what we were expecting to get and that’s the other quality running back that we were looking for,” Rivera said, acknowledging some caution about when Robinson might return.

“We have to be smart about how we’re going to handle him, and we’ve got to handle those expectations. We also got to handle what he’s going to go through physically and mentally. It’s a different set of circumstances. I don’t know of any other player that I’ve coached that’s had to go through this.”

Backup center Tyler Larsen, who had been on the physically unable to perform list with an Achilles tendon injury since the start of training camp, is also expected to be activated this week, Rivera said. Larsen could be Washington's fourth starter at the position in five games after Chase Roullier, Wes Schweitzer and waiver pickup Nick Martin.

Pass rusher Chase Young, who's recovering from surgery to repair a torn ACL in his right knee, is eligible to be activated but won't be yet. His return is a bit further away.

“He’s been trending the right direction,” Rivera said. "We have to wait and see where he is after this week. But the doctors are optimistic. They’ve been pretty promising as far as their reports. It’s just they feel he needs a little bit more time.

Rivera said rookie receiver Jahan Dotson, the Commanders' first-round pick, is also expected to miss a week or two with a hamstring injury.