Brissett, Browns handed most lopsided loss of season by Pats 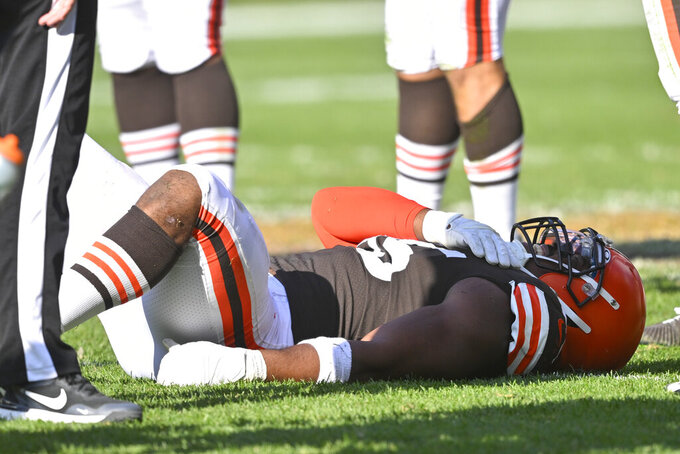 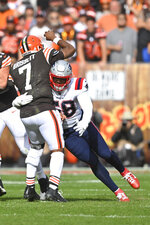 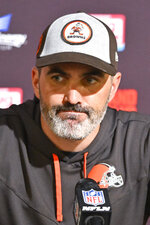 CLEVELAND (AP) — Browns quarterback Jacoby Brissett committed three turnovers, the defense allowed a season high in points, and their fans lustily booed them throughout the second half.

A once-promising season is turning ugly in Cleveland.

Rookie Bailey Zappe threw for 309 yards and two touchdowns as the New England Patriots rolled to a 38-15 victory Sunday, handing the Browns their third consecutive loss and their most lopsided defeat of the year.

“Everyone had their handprint on this one, including myself in a big way,” said Brissett, who was intercepted twice and lost a fumble. “The main thing is we’re beating ourselves. We’ve got to get out of our way.

The Patriots forced Brissett to make plays by holding NFL rushing leader Nick Chubb to season lows of 56 yards on 12 carries. Cleveland also lost Pro Bowl guard Wyatt Teller to a calf injury in the first half and did not return.

New England turned Brissett’s three giveaways into 17 points and scored another touchdown off a fumble by punt returner Chester Rogers in the fourth quarter.

The latter prompted most of the FirstEnergy Stadium crowd of 67,431 to head for the exits, but not before loudly voicing its displeasure.

“We had a couple of blunders that hurt us -- offense, special teams, defense,” safety John Johnson III said. “We have to play complementary football, and we’re not doing that right now.”

Embattled defensive coordinator Joe Woods’ scheme allowed four TDs in the second half — two of them on sharp throws from third-stringer Zappe — and only forced one turnover.

Though coach Kevin Stefanski said he is not considering benching Brissett in favor of Joshua Dobbs, he didn’t rule out other changes after the Browns fell to 2-4.

“You look at all of those type of things week in and week out if there is something you want to do to help the team,” Stefanski said. “The bottom line is we have to go put a plan together, put the guys in position, make plays and those type of things.”

Star defensive end Myles Garrett provided the Browns’ lone highlight, becoming the franchise’s career sack leader when he stripped the ball from Zappe in the first quarter. He surpassed Clay Matthews, who had 62 in 232 games with Cleveland.

Garrett added another sack in the fourth, giving him 63 1/2 in 73 games, but re-aggravated his left shoulder injury on the play. He was initially hurt in a one-car auto accident on Sept. 26.

“I was playing today and I’ll be playing again next week,” Garrett said. “It could be better, but I’ve been dealing with it since the accident. I don’t care how I feel, I’m always going to put my teammates first.”

The Browns’ next two games are against AFC North foes in Baltimore and Cincinnati, which could make or break their season. Also looming is the Dec. 4 return of quarterback Deshaun Watson from his NFL suspension.

“I don’t think any of us are seeing that far in the future,” Garrett said. “There are a lot of plays that aren’t being made that are killing us. It’s a real team effort and everyone in this organization has to all be on the same page.”