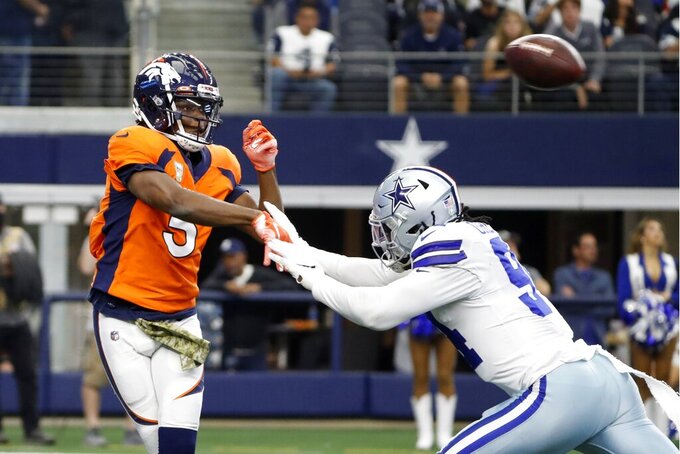 LINE: Broncos by 2½, according to FanDuel SportsBook.

EAGLES PLAYERS TO WATCH: WR DeVonta Smith is coming off his second 100-yard receiving game. The rookie is tied for the third-most receptions of 20 yards or more with nine.

BRONCOS PLAYER TO WATCH: Rookie RB Javonte Williams is coming off a breakout game in which he piled up 111 yards on 17 carries, with another carry-the—whole-defense big gain, this one a 30-yard beauty with a push from fill-in guard Quinn “The Belly” Meinerz.

SERIES NOTES: Four of the last five games between these teams have been blowouts. The only one that wasn't: a 30-27 Eagles win at Lincoln Financial Field on Dec. 27, 2009, during a four-game skid that cost Denver a playoff spot after starting out 6-0 under Josh McDaniels.

STATS AND STUFF: The Eagles are 3-2 on the road. .... They have rushed for 176-plus yards in consecutive games for the first time since a three-game stretch in November 2017. They had 100 yards on the ground in the first half in consecutive games for the first time since 2013. ... The Eagles have committed the fewest penalties per game (3.3) since Week 6. ... The Eagles are third in red-zone efficiency at 71.9% ... QB Jalen Hurts had his second-best passer rating (115.3) of his two-year career last week. ... Running backs Jordan Howard, Boston Scott and Kenneth Gainwell has combined for six rushing TDs the last two games. ... C Jason Kelce will make his 115th consecutive regular-season start, which is the longest active streak among NFL centers. ... With wins over the Giants, Cowboys and Washington, the Broncos can sweep the NFC East with a win Sunday. ... QB Teddy Bridgewater had his first touchdown run for Denver last week. Bridgewater is seventh in the league in air yards per attempt at 8.67. The only QB ranked ahead of him with a higher completion percentage than Bridgewater's 70.8 is Seattle's Russell Wilson, who's played in only five games because of a thumb injury. ... RB Melvin Gordon III has scored touchdowns in three consecutive games. ... Williams is coming off his first career 100-yard game and ranks third among rookies with 601 scrimmage yards. ... WR Patrick leads the team with four TD catches, including one last week at Dallas when he beat Cowboys CB Trevon Diggs on a 44-yard score. ... Rookie Caden Sterns had his second interception last week and rookie OLB Jonathon Cooper had his first two career sacks in his first start since Von Miller's trade to the Rams.

FANTASY TIP: WR Jerry Jeudy had six catches for 69 yards last week in his second game back from a sprained right ankle that had sidelined him for six weeks.