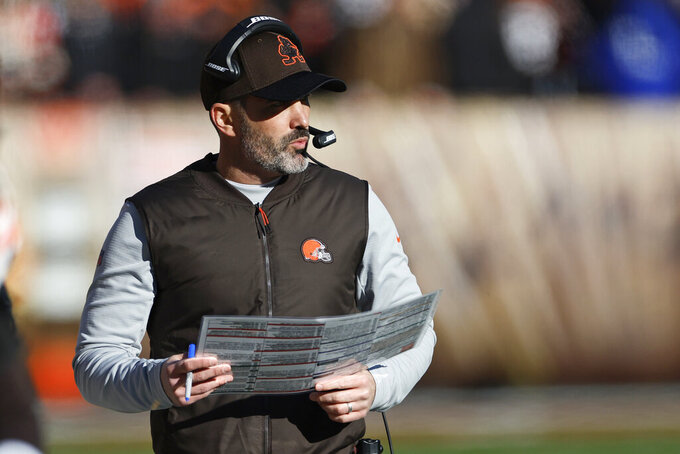 Nothing new for him or the Browns.

On Wednesday, the team's virus outbreak widened and worsened with Stefanski, quarterback Baker Mayfield and three others starters testing positive, jeopardizing their chances of participating in Saturday’s critical game against the Las Vegas Raiders.

In all, Cleveland has 18 players — 11 of them starters or regulars — and two coaches on the COVID-19 list.

It's the second straight year the Browns are dealing with a major spike in COVID-19 cases while in the midst of pursuing a playoff spot. Last season, Stefanski had to sit out Cleveland's wild-card win at Pittsburgh after a positive test.

“We've been here before,” Stefanski said on Zoom. "Everybody has to step up depending on who's available.”

NFL commissioner Roger Goodell said there has been no discussion of postponing the Browns-Raiders game, even as the Browns’ outbreak grows.

"Listen, we’ve raised this the last two years: It’s a challenge,” Goodell said at the owner's meetings in Texas. “I think the things that made us successful was keeping safety first. Second, being willing to adapt at all times.

"It’s clear even in the last couple of weeks that the changes are pretty significant and different than they were before, and I think it calls to modifications to our protocols in general, and we’re working with the players association on that.”

It's possible the Browns could have more cases. In the meantime, they're going forward with an abnormal work week in 2021, but one they experienced much of last season.

“We have a game Saturday at 4:30 p.m., unless somebody tells me otherwise,” said Stefanski, voted AP's Coach of the Year in 2020, partly for navigating his team around COVID-19 and to the playoffs.

"We just really have to focus on what we need to do to prepare, and that is our full expectation is to get out there with our guys Saturday and go find a way.”

Stefanski and the positive players will have to be asymptomatic and produce two negative tests to be eligible to participate Saturday. If Stefanski is out, special teams coordinator Mike Priefer will serve as acting head coach for the game at Cleveland, just as he did in January at Pittsburgh, and offensive coordinator Alex Van Pelt will handle play calling.

“My confidence, as you can imagine, is incredibly high with all of our coaches,” Stefanski said.

It’s hardly an ideal situation heading into a vital game for the Browns (7-6), who have been inconsistent all season and are preparing to host the Raiders (6-7) on a short week — and may not be able to have a full practice.

Stefanski's message to the team amid the outbreak was to lock in.

"The guys will go from the parking lot right onto the field,” said Stefanski.

The Browns are on the extreme end of what has been a major rise in COVID-19 cases across the league this week. There were 65 reported cases on Monday and Tuesday, the worst two-day outbreak since the pandemic started.

If there is one bright spot, it's that the Browns have practice at this.

Last season, they were one of the league's hardest-hit teams by the coronavirus. The Browns were without star defensive end Myles Garrett down the stretch after he tested positive.

Stefanski missed the wild-card game — along with Pro Bowl guard Joel Bitonio — after testing positive days ahead of the game and watched the Browns beat the Steelers from his basement at home.

On Monday, Mayfield, who has been contending with injuries all season, and his wife, Emily, appeared at a Christmas event at a local Boys & Girls chapter, where they could have exposed themselves and others to the virus.

After learning of Mayfield's positive test, the Boys & Girls Clubs of Northeast Ohio said in a statement that it informed parents and family members of the 75 children who attended the event. The club is closing its facility in Elyria, Ohio, for the rest of this week, “to do a deep cleaning and limit any further exposure.”

Stefanski said he supported Mayfield's charity work, and that he has spoken to the team about using caution while in public places as the virus rages.

Mayfield has played most of this season with a fracture in his left shoulder, but said after Sunday's win over Baltimore that he's feeling better than in months. If he can't play, veteran backup Case Keenum will start.

Keenum filled in for an injured Mayfield earlier this season and led the Browns to a win over Denver.