Browns face plenty of uncertainty as they head to Green Bay 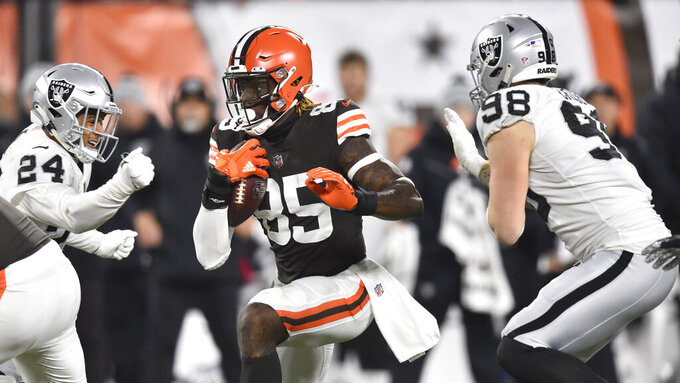 GREEN BAY, Wis. (AP) — The Cleveland Browns are residing in the AFC North basement, dealing with COVID-19 complications and playing two road games in a span of six days.

Yet they remain in the mix for a second straight playoff berth.

The Browns (7-7) can give their fading postseason hopes a major boost by winning Saturday as they attempt to hand the NFC North champion Green Bay Packers (11-3) their first home loss of the season.

Cleveland is attempting to bounce back from a 16-14 loss to the Las Vegas Raiders that was decided by a field goal on the game’s final play.

“We have to go out there, forget what happened, understand the situation to win and understand that we can’t have any more mess-ups,” Browns defensive tackle Malik Jackson said. "That is it. Just live in that reality.”

The Browns were missing coach Kevin Stefanski and about a dozen usual starters — including quarterback Baker Mayfield — who were on the reserve/COVID-19 list for the Raiders game.

Stefanski has since returned. The Browns also expect to have some players back who weren’t available for Monday's game, maybe even Mayfield, who might not travel with the team to Wisconsin, but is expected to start.

“If he’s healthy as he’s been and he’s cleared and ready to go, then I anticipate him playing.”

With the late kickoff, the Browns will have a walkthrough before the game, which will give Mayfield a chance to go over the game plan and throw after being limited to virtual meetings the past two weeks.

It has been a challenging two weeks for the Browns, who have dealt with numerous obstacles while preparing for one of the NFL’s top teams.

“The challenge is facing a really good Packers team,” Stefanski said. “You know they have star players. They are very well coached. We have our work cut out for us. Who is available to us and all of those type of things, we will just deal with it day by day.”

While the Browns are trying to stay in the playoff picture, the Packers also have plenty at stake in this Christmas Day contest.

Green Bay already has secured its third straight NFC North title, but is competing for the top seed in the conference playoffs, which would give the Packers a first-round postseason bye. The Packers are seeking their first Super Bowl berth since their 2010 title run after losing in the NFC championship game each of the last two years.

The Arizona Cardinals, Dallas Cowboys and Tampa Bay Buccaneers are all one game behind Green Bay in the conference standings.

“We can’t take these next three opponents lightly because we still have a lot left out there for us,” Packers wide receiver Allen Lazard said. “Yes, we’ve had success. Yes, we’ve won division titles. We’ve gone to the NFC championship the past two years, but ultimately when the season’s over with, we didn’t reach our goal."

Packers quarterback Aaron Rodgers' next touchdown pass will be his 443rd, which would overtake Hall of Famer Brett Favre for the franchise lead. Favre threw 508 touchdown passes, but that total includes 22 with the New York Jets in 2008 and 44 for the Minnesota Vikings from 2009-10.

“After last season, I knew that I was getting closer and if I had a decent season this year, I could get home and get this record," Rodgers said, “which is definitely meaningful to me because of the history of the franchise and how much I’ve enjoyed my time here.”

Garrett injured his groin in the fourth quarter Monday, stayed in despite being limited and said it would take a “broken leg” to keep him out against Rodgers and the Packers. He didn’t practice this week.

“I feel like I’ll play regardless of how I feel,” he said. “I’m going to go out there and give my all. We’ve got to win out to make the playoffs and I’m going to play in every second of the game that I can.”

Garrett, who has a career-high 15 sacks, understands the task won’t be easy with Takk McKinley out for the season and Jadeveon Clowney on the COVID-19 list.

Jackson may know Rodgers personally, but that doesn’t mean he’ll treat him nicely on the holiday.

The Browns defensive tackle believes he also might have provided the inspiration for Rodgers to dress up on Halloween like John Wick, the movie hitman portrayed by Keanu Reeves. Jackson and Rodgers worked out together in California during the past offseason.

“He came in one day with the hair slicked back,” Jackson said. “Just the whole vibe was just John Wick, just do not care and just walking around doing your thing. I called him Mr. Wick.”

The Browns' kicking game has a new look.

Struggling kicker Chase McLaughlin was placed on the COVID-19 reserve list Friday, and will be replaced by Chris Naggar, who was activated from the practice squad to make his regular-season debut.

The Browns initially planned to stick with McLaughlin despite him missing six of his last 12 field goal tries, including a 47-yarder that proved costly against Las Vegas.

While they intended to ride it out with McLaughlin, the Browns waived punter Jamie Gillan.

Nicknamed “The Scottish Hammer,” Gillan struggled all season. He went on the COVID-19 list two weeks ago, and veteran Dustin Colquitt took his job.

The Packers have their own special teams issues.

They committed three penalties at Baltimore. One week earlier, they allowed a 97-yard punt return to Chicago’s Jakeem Grant and had several other special teams gaffes.

This marks the first time the Browns have played on Christmas Day.

The Packers have played on Christmas twice before. They lost at home to the Bears in 2005 and beat the Bears at home in 2011.

Packers coach Matt LaFleur is 37-9 in the regular season. A victory Saturday would enable LaFleur to match George Seifert’s record for most wins by a head coach in his first three seasons.

Seifert had a 38-10 regular-season record in his first three years.