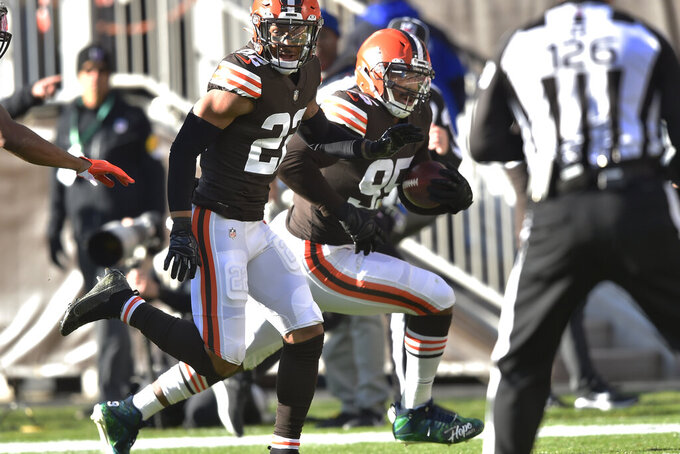 Cleveland Browns defensive end Myles Garrett (95) runs in for a touchdown during the first half of an NFL football game against the Baltimore Ravens, Sunday, Dec. 12, 2021, in Cleveland. (AP Photo/David Richard)

The Browns’ star defensive end, who has a career-high 15 sacks this season, is dealing with a groin injury and could miss Saturday’s game at Green Bay as Cleveland tries to boost its sagging playoff chances.

Garrett got hurt in the fourth quarter of Monday night’s loss to Las Vegas, and the 2020 All-Pro had trouble pushing off and pressuring quarterback Derek Carr, who drove the Raiders to a last-second winning field goal.

The Browns (7-7) hope to have Garrett back to put some heat on Packers QB and reigning MVP Aaron Rodgers, who will be facing a Cleveland defense still missing other key pieces due to COVID-19.

Browns coach Kevin Stefanski would not comment on results from an MRI done Tuesday on Garrett — or speculate whether the elite edge rusher will be available.

The Browns, who could get some players back from a lengthy COVID-19 reserve list in time for the game, only did a walk-through Wednesday, but Stefanski said he’d pay close attention to Garrett.

As the Browns wait to see if they’ll have Garrett, defensive tackle Malik Jackson tried speaking it into existence.

“I’m going to put positivity in the air and say he’s going to be there,” Jackson said on a Zoom call.

Cleveland’s defensive front is not whole. End Jadeveon Clowney remains on the COVID-19 list after testing positive late last week. Also, the Browns on Tuesday placed end Takk McKinley on injured reserve after he tore an Achilles tendon against the Raiders. He’s scheduled to have surgery.

“We’ve got guys that have been sitting here biting at the chomps ready to get out there and show what they have,” Jackson said. “I don’t think we’ll miss a beat. As good as Myles is, I think guys, if we’ve got two or three guys going just as hard, it will be good like Myles. I think we’ll be good.

“I know Myles is a warrior, he’s going to try to go and be out there and help us, so that’s what I’m expecting. But if he can’t, then that’s what it is, and I expect (Curtis) Weaver or Porter Gustin or whoever’s up to do their thing.”

Other options for the Browns are Joe Jackson and Ifeadi Odenigbo, who is scheduled to come off the COVID-19 list.

Earlier Wednesday, the Browns waived popular punter Jamie Gillan, whose struggles this season began after he dropped a snap from center that contributed to a loss in the opener at Kansas City.

Nicknamed the “Scottish Hammer,” Gillan had been one of nearly two dozen players on the team's COVID-19 reserve list. He had recently been replaced by veteran Dustin Colquitt, who was signed two days before Cleveland's game against Baltimore on Dec. 12 and has played the past two games.

Gillan's season got off to a rough start when he failed to catch a snap in the fourth quarter against the Chiefs. The Browns were leading 29-27 at the time, and after he fumbled, Gillan was tackled as he tried to run for the first down.

The Chiefs capitalized by scoring the go-ahead touchdown in their 33-29 win.

Gillan's struggles continued throughout the season. He was 31st in the NFL with a 43.9-yard average and he didn't deliver quality punts at key moments. He was placed on the COVID-19 list on Dec. 9.

A former rugby player in Scotland, Gillan beat out Colquitt's brother, Britton, as a rookie in training camp. He became an immediate fan favorite with his long hair, thick accent, fun-loving personality and community work.