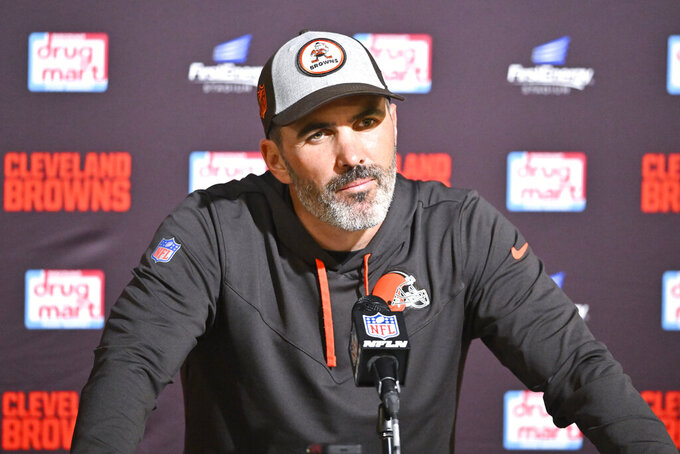 While moving into a tie for second with George Halas in career coaching victories, Belichick exposed all of Cleveland's weaknesses during New England's 38-15 dismantling of the Browns on Sunday. He did the same thing to his former team last year in a 45-7 drubbing.

This lopsided loss — the Browns' three others were by a combined six points — affirmed issues Stefanski and his assistants have been dealing with for weeks and unearthed some new concerns as the Browns (2-4) enter a stretch of tough games, beginning this week in Baltimore.

Belichick deployed a bigger defensive lineup early, knowing Cleveland would lean on its NFL-leading running game led by Nick Chubb. It forced the Browns to pass and Jacoby Brissett threw the first of two interceptions on the game's second play.

It went quickly downhill from there as the offense stalled, failed to capitalize after Cleveland's defense forced a turnover and spent the afternoon playing catch-up.

On defense, the Browns' tackling problems from the previous two games improved and they held the Patriots to 98 yards rushing. However, Cleveland's line didn't put enough pressure on rookie Bailey Zappe, who threw for 309 yards and a pair of TDs in his second NFL start.

It's been like that all season for Stefanski. Fix one thing, something else breaks. Every move he made Sunday, Belichick countered.

Down 24-15, Cleveland sealed its fate by botching an onside kick and muffing a punt — unforgivable against any team, death sentences against Belichick.

Brissett had his worst game, completing 21 of 45 passes for 266 yards with three turnovers. However, the veteran QB filling in during Deshaun Watson's suspension had a positive impact afterward, addressing his teammates in the locker room.

Brissett implored the Browns to stick together, be accountable and work hard.

The message inspired former All-Pro right tackle Jack Conklin to tell his teammates something else.

“My last year in Tennessee we were 2-4 and we ended up fishing 9-7 and making the AFC Championship game,” he said Monday. "It’s about just catching some fire, getting on a roll and it all starts this week in Baltimore. We just got to start making good plays and playing well, complementary ball as a team and that’ll start rolling along together.”

At least Belichick isn't ahead.

Not very much. It's no secret that if the Browns can't run the ball, they're in trouble. Belichick made them fight with one hand tied. Brissett has been inaccurate and sloppy the past two weeks, and his inability to connect on deep throws takes away the quick-strike potential.

Name it. But Cleveland's defense remains the most troubled spot. Coordinator Joe Woods' scheme has come into question, and there are concerns about the Browns' linebackers being undersized and therefore unable to stop the run. Injuries to Pro Bowl cornerback Denzel Ward (concussion) and edge rusher Jadeveon Clowney (ankle) only compound matters.

Rookie kicker Cade York shook off a pair of misses a week earlier by making field goals of 39, 48 and 51 yards.

This was supposed to be a breakout season for safety Grant Delpit, a second-round pick in 2020. It's broken to this point. Delpit has been on the field for some miscommunications among Cleveland's defensive backs, and Sunday he had two notable mistakes in the third quarter.

First, he failed to wrap a Patriots receiver, lowering his shoulder and knocking teammate Jeremiah Owusu-Koramoah off a potential tackle in the process on a reception that became a 53-yard play. He also lost his footing and got beat on a 31-yard TD pass.

Stefanski said Ward remains in the concussion protocol. ... The team is also awaiting imaging results on All-Pro right guard Wyatt Teller's injured calf. He left in the first half and didn't return. ... DE Myles Garrett (left shoulder) continues to deal with an injury suffered in a car crash last month. He'll likely rest most of this week. ... Conklin sprained his ankle Sunday, but doesn't expect it to keep him out.

12 — Chubb's season-low for carries as the Patriots rarely let him escape the first wave of tacklers and get into space.