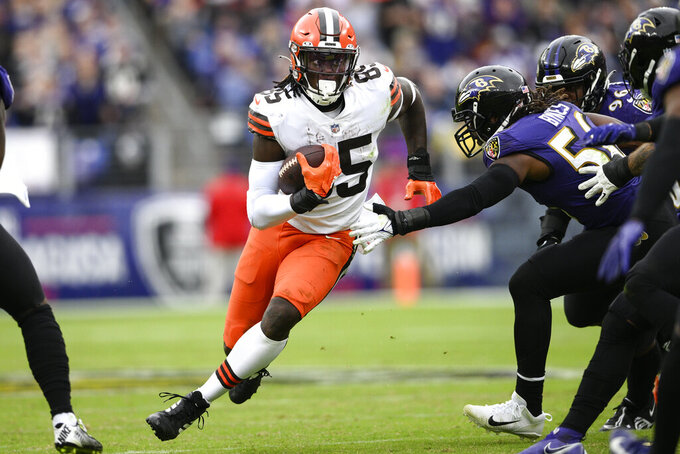 CLEVELAND (AP) — Cleveland Browns starting linebacker Jacob Phillips will likely miss the remainder of the season after sustaining a pectoral injury during Sunday's 23-20 loss to the Baltimore Ravens.

Also, tight end David Njoku could miss significant time with an ankle injury for the Browns (2-5), who have lost four straight.

The loss of Phillips is another blow to Cleveland's defense, which had one of its better performances against dynamic Ravens quarterback Lamar Jackson. Phillips had taken over signal-calling duties after captain Anthony Walker Jr. suffered a season-ending quadriceps injury in Week 3.

This is the second serious injury in two seasons for Phillips, a third-round pick from LSU in 2020. He played in just four games last year after suffering a biceps injury in training camp.

As for Njoku, Stefanski said he's “week to week” with ankle injury. The Browns host the Cincinnati Bengals next Monday, giving him an extra day's rest.

However, Njoku, who had seven catches for 71 yards before getting hurt in the third quarter, left M&T Bank Stadium in a walking boot and on crutches and will likely need more than a week to recover.

Njoku posted "Be back soon” on Twitter following the game. The Browns have a bye after facing the Bengals.

The 26-year-old Njoku has become a dependable option in Stefanski's offense. He has 34 catches for 418 yards and a touchdown this season and five straight games with at least 58 yards.

Cleveland's tight end depth is thin at the moment with Pharaoh Brown in concussion protocol after getting hurt Sunday.

Stefanski said top cornerback Denzel Ward remains in concussion protocol. He's missed Cleveland's past two games after getting hurt in the fourth quarter against the Los Angeles Chargers on Oct. 9.