Browns RG Teller likely out against Ravens with calf injury 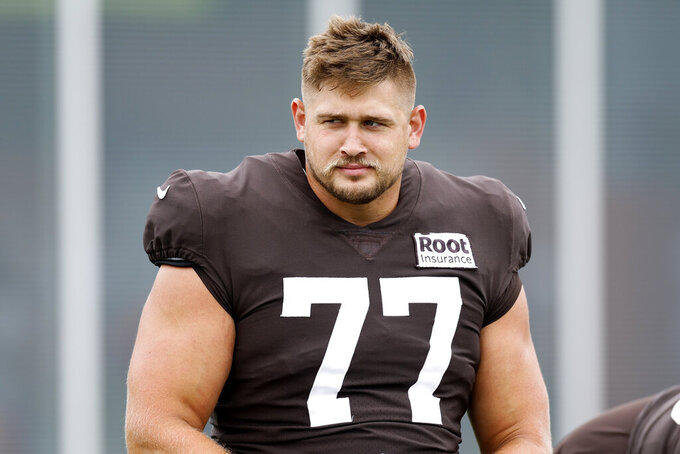 Teller got hurt in the first quarter of last week's 38-15 loss to New England. During the open locker room period Wednesday, Teller was in a walking boot and said he would sit out this week.

Teller doesn't think the injury is as severe as a similar one in 2020, when he missed three games.

Browns coach Kevin Stefanski would not rule out Teller but said “it's doubtful” he'll be available this week.

The 6-foot-4, 315-pound Teller is a critical part of Cleveland's dynamic running game, opening holes for star back Nick Chubb, who leads the league with 649 yards rushing.

Backup Hjalte Froholdt filled in for Teller against the Patriots, and Stefanski said he would be among the options to play against the Ravens.

Teller is one of seven starters not practicing Wednesday as the Browns (2-4) began preparing for the Ravens (3-3).

All-Pro defensive end Myles Garrett is being treated for a strained left shoulder and biceps injury he sustained in a car crash last month. Garrett missed one game and sat out the final minutes of Sunday's home loss.

Garrett said he would play this week and Stefanski agreed the Browns' career sacks leader is on track.

Also, top cornerback Denzel Ward remains in the concussion protocol. He got hurt two weeks ago against the Los Angeles Chargers and has not been cleared to return.