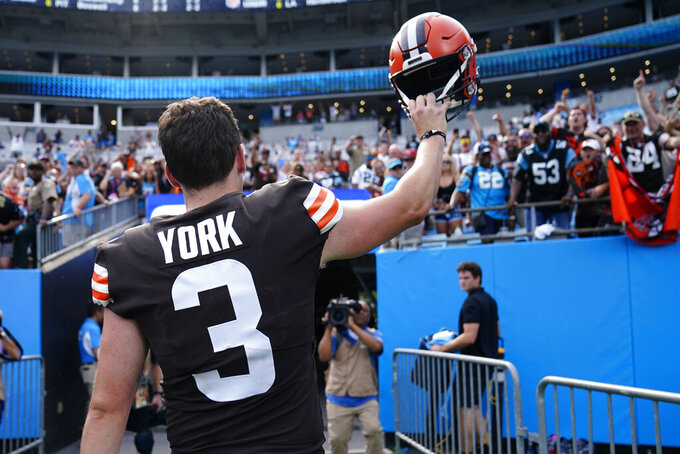 Cleveland Browns place kicker Cade York waves as he leaves the field after their win against the Carolina Panthers during an NFL football game on Sunday, Sept. 11, 2022, in Charlotte, N.C. York kicked the game winning field goal. (AP Photo/Jacob Kupferman)

For the time being.

The Browns' young kicker is savvy enough to know his new-found celebrity may be fleeting.

“I had a good game, but next week’s a new game,” York said Wednesday after being the AFC Special Teams Player of the Week. “Cleveland could hate me after next game, so it doesn’t really mean anything.”

The fourth-round draft pick from LSU made four field goals, including a 58-yarder with 8 seconds to go — the longest field goal by a first-year kicker in Week 1 in league history — as the Browns edged the Carolina Panthers 26-24.

Showing no nerves, the 21-year-old calmly drilled a kick that gave the Browns their first season-opening win since 2004 and prompted a few of the city's kitschy clothing stores to print up T-shirts to mark the occasion.

On one of them, with the familiar “I love New York” slogan on the front has been changed to read: "I love Cade York.”

So is York, who has not only impressed teammates with his powerful right leg, but also a self-assuredness rarely seen in such a young player.

“We’ve had a lot of really good people come in as kickers over the years, but I would say it’s a unique combination of his confidence, his ability and overall I would just say his maturity,” said Hughlett, who has been with the Browns since 2014. “He does a really good job in all three of those areas.”

York is the first Cleveland specialist to be honored with the AFC award since punter Jamie Gillan in 2019, and the first Browns kicker since Phil Dawson in 2005, when he was 4.

He took it in stride.

“I mean, awards-wise, the week is over," he said at his locker before practice. "So it doesn’t really matter anymore. We’ve got 20 weeks left, hopefully, so just getting back to it.”

On Sunday, York validated the Browns' decision to make him the first kicker taken in the first four rounds since 2016.

After having a poor warmup that had special teams coordinator Kevin Priefer and coach Kevin Stefanski reconsidering when to use him, York made three field goals and two extra points before the Browns called on him in the closing seconds.

Like a golfer adjusting his swing to the conditions, York had been playing a right to left “draw” on his first three kicks and used that strategy on his last. His kick started right, but then bent back and cleared the uprights with room to spare.

“I’d rather hit it dead straight,” he said. "But I’ve been hitting it right to left all day so I just played that.”

Earlier this summer, York told Browns quarterback Jacoby Brissett that if the situation ever came up, he only needed to move the ball to the 40-yard line to set up any potential game-winning kick.

York would handle the rest.

“One, from a rookie, that’s rare, but from a kicker, that’s even more rare,” he said. “But he puts in the work, so he should be confident. He should want the ball in his foot at the end of the game. He was confident, and that’s more than half the battle right there.”

York's celebrity has been steadily growing. He was the star attraction at training camp for Browns fans, who have endured enough bad kicking over the years since the super-steady Dawson left in 2012 after 14 seasons.

York then drilled a 70-yard field goal before a home preseason game with the kick taking on almost urban myth status to anyone who didn't witness it.

And after his award-winning performance in Charlotte, York got sense of his popularity when he was greeted by fans on Monday night during a fundraising event at FirstEnergy Stadium.

He's expecting it to be that way when he's introduced before Sunday's home opener against the New York Jets.

“I mean it was kind of like that all training camp just cause a kicker got drafted,” he said. "But I better do my job.”