Chargers continue to struggle with same mistakes on defense 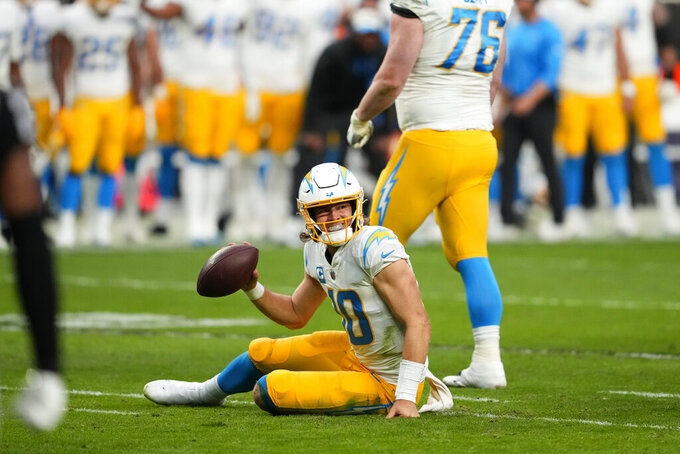 Los Angeles Chargers quarterback Justin Herbert (10) reacts after being tackled during the first half of an NFL football game against the Las Vegas Raiders, Sunday, Dec. 4, 2022, in Las Vegas. (AP Photo/Matt York)

Los Angeles Chargers general manager Tom Telesco spent more than $112 million in guaranteed salaries during the offseason to get players with experience in Brandon Staley’s defense.

Through 12 games, the returns have been disappointing.

The inability to stop the run and allow explosive plays were on display again during Sunday’s 27-20 loss to the Las Vegas Raiders. The defeat leaves the Bolts at 6-6. They must go on a late-season run to avoid missing the playoffs for the fourth straight season.

“It’s just gonna come down to covering and tackling better. It certainly changes the game when you give them up. The story yesterday were the explosions because the big ones for them were certainly big,” Staley said. “We’ve got five games left. The AFC is really tight. We need to put this one behind us and get ready for Miami.”

Josh Jacobs became the seventh running back to get a 100-yard game against the Chargers this season with 144 yards on 26 carries.

Los Angeles is 29th in rushing defense, allowing 151.6 yards per game, but opponents are averaging 5.43 yards per carry, which is on pace to become the highest since the merger.

The seven 100-yard games are tied for the most the Chargers have allowed in a season. With five games remaining — including Tennessee’s Derrick Henry and Indianapolis’ Jonathan Taylor — that mark is likely to fall.

The Chargers are 3-4 when giving up at least 100 yards on the ground.

Another season-long problem has been giving up explosive plays. They have allowed a league-high 13 touchdowns of 20 yards or more, including three against the Raiders. Jacobs scored from 20 yards while Davante Adams had TDs of 31 and 45 yards.

“Adams is a really good player and he made some plays yesterday. On the Jacobs touchdown, was poor setup. We weren't aligned right to the tight end side of the formation,” Staley said.

Opponents have 54 plays of at least 20 yards, which is tied for fifth most.

Keenan Allen against the Raiders. Allen became the fourth player to have 100 career catches against the Raiders. The 10th-year receiver, who has 103 in 17 games, joins Pro Football Hall of Famer Tony Gonzalez (114), former Charger Antonio Gates (111), and former Broncos standout Rod Smith (104). On Sunday, Allen finished with six receptions for 88 yards, including a 35-yard touchdown during the fourth quarter.

Second-half adjustments. The Chargers have been outscored 53-25 after halftime in the past four games. They have only four scoring drives in 21 possessions and have committed four turnovers.

LB Drue Tranquill has surpassed 100 tackles on the season for the first time in his career after getting five on Sunday. Tranquill, who will be a free agent after the season, and safety Derwin James are the fourth pair of Chargers teammates to each have 100 tackles in a season.

Asante Samuel Jr. was targeted four times when matched up against Adams and allowed four receptions for 95 yards, including a 31-yard touchdown during the third quarter that proved to be the go-ahead score. According to the NFL’s Next Gen Stats, Samuel has allowed five touchdowns this season, which is tied for fifth most among cornerbacks.

DT Sebastian Joseph-Day has an MCL sprain to his right knee with a further update on his status as the week progresses. OG Zion Johnson (shoulder) and CB Bryce Callahan (groin) remain day to day after they suffered injuries against the Raiders. OT Trey Pipkins (knee), WR Mike Williams (ankle) and TE Donald Parham (hamstring) could return to practice this week. C Corey Linsley remains in concussion protocol.

20 — Games Justin Herbert has passed for at least 300 yards, which is the most by any player in their first three seasons in the league. Andrew Luck had the old mark with 19 from 2012-14 while with the Indianapolis Colts.

The Chargers have two straight home games starting with a Sunday night matchup against Tua Tagovailoa and the Miami Dolphins. Tagovailoa was the fifth overall selection in the 2020 draft, while Herbert went with the next pick.