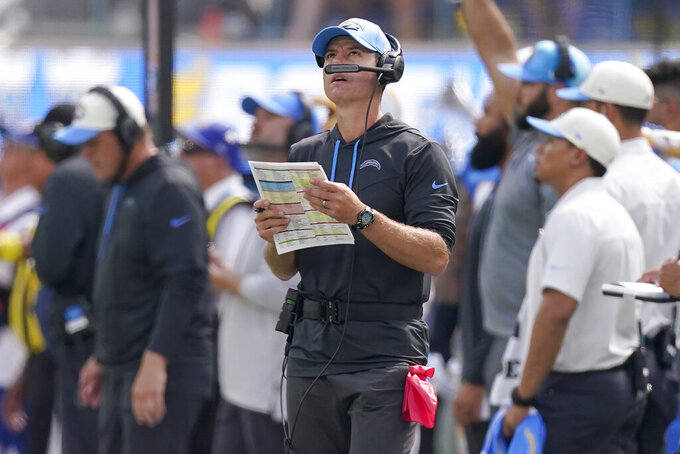 Reeling and wounded are two descriptions no team likes to have three weeks into the season. Yet that is the position the Los Angeles Chargers find themselves in after their worst loss in Brandon Staley's two-year tenure.

Jacksonville's 38-10 rout on Sunday not only was the Chargers' second straight defeat, but the injury list grew longer as the game wore on.

Not only does quarterback Justin Herbert's rib injury remain a concern, but offensive tackle Rashawn Slater will likely miss the rest of the season due to a torn left biceps. And linebacker Joey Bosa has what coach Brandon Staley termed a “significant groin injury” that will keep him sidelined a while.

The injuries come at the worst possible time for Los Angeles, which was already missing center Corey Linsley because of a knee issue, wide receiver Keenan Allen (hamstring) and cornerback J.C. Jackson (ankle). Allen is likely to return to practice this week, while the statuses of Linsley and Jackson remain undetermined.

“For injuries to happen to high-profile players like we have, it’s not uncommon," Staley said. "And what you've got to do is just kind of weather that storm and stay together. I think that’s where we’re at right now.”.

Slater's injury is the most significant and could cause some shuffling on the offensive line. Storm Norton played left tackle after Slater went out in the second half, but struggled most of last season starting at right tackle before Trey Pipkins won the job in training camp. Rookie guard Jamaree Salyer — who played tackle at the University of Georgia — could be another option.

Herbert played the entire game despite it being out of reach in the fourth quarter. Staley took plenty of criticism after the game for Herbert staying in and said it was a joint decision.

One day later, Staley said if the same situation arises, he would do a better job of communicating to Herbert that coming out would serve everyone best.

“In that moment, I don’t regret how we went through that together. But I think that the lesson moving forward is just making sure that he knows that he’s already done enough,” Staley said. “Playing in that ballgame alone shows how much Justin cares about them. And they know the type of fight that he has.”

Punter JK Scott continues to show why he was the Chargers' most underrated offseason signing. Scott's average hang time of 5.00 seconds is second in the league and has resulted in opposing returners getting only 28 yards, which is fourth least in the AFC.

The run game has been abysmal, averaging only 2.64 yards per carry, 20 of their 64 attempts this season going for no gain or negative yards and only one run going for 10 yards or more. The Jaguars made the Chargers a one-dimensional offense by holding them to zero ground yards in the first quarter and 14 in the first half despite it being a nine-point game.

With Allen sidelined for the second straight game, Joshua Palmer stepped up with six receptions for 99 yards. Palmer's best catch came on the last play of the third quarter, when he beat Jaguars CB Andre Cisco on a crossing route and went 45 yards up the left sideline before being pushed out of bounds at the Jaguars'

The pass rush was non-existent against the Jaguars. Besides generating no sacks, Trevor Lawrence felt pressure on only five of 39 dropbacks and was hurried three times. Khalil Mack had no pressures after having nine, including 3 1/2 sacks, in the first two games.

WR Jalen Guyton, who had a 54-yard reception on a third-quarter drive that set up a field goal, is also lost for the season due to a torn ACL. The injury happened late in the fourth quarter.

7 — The number of times since 2013 the Chargers have started 1-2. The only saving grace for Bolts fans at the moment is that the last two playoff trips in 2013 and '18 occurred after they dropped two of their first three games.

The Chargers hit the road the next two weeks, beginning Sunday against Houston. The Texans have won three of the last four, including 41-29 in Week 16 last season that was part of a stretch during which the Chargers dropped three of their final four to miss the playoffs.