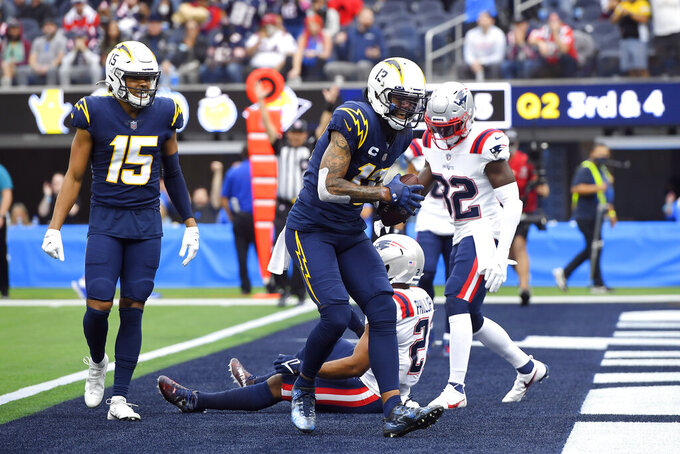 AGAINST THE SPREAD: Chargers 4-3; Philadelphia 4-4.

TURNOVER DIFFERENTIAL: Chargers plus-2; Eagles plus-1.

CHARGERS PLAYER TO WATCH: QB Justin Herbert is fourth in the AFC with 16 touchdown passes, but he has struggled in the last two games. In losses to Baltimore and New England, Herbert was 40 for 74 for 418 yards with three TDs and three interceptions. It is the first time in his two-year career he has had two straight games with a passer rating under 70. Herbert needs 25 completions to reach 600 and three TD passes for 50 in his career.

EAGLES PLAYER TO WATCH: RB Boston Scott had 60 yards rushing and two TDs last week on 12 carries filling in for injured starter Miles Sanders. Scott has three TDs in the past two games after getting no carries the first six games.

KEY MATCHUP: Eagles' offensive line vs. Chargers' front seven. LA’s defense is last in the NFL against the run and the Eagles are coming off their best rushing game in several years, totaling 236 yards on the ground with Scott and Jordan Howard leading the way.

KEY INJURIES: Eagles RB Sanders is on injured reserve and will miss at least two more games with an ankle injury.

SERIES NOTES: The Eagles have won three of the last five meetings but the last win against the Chargers in Philadelphia came in 2005.

STATS AND STUFF: The Chargers are one of two teams to convert more than eight attempts on fourth down. They are 9 for 13 (69.2%), which is the third-best percentage. … Los Angeles has scored 66 points in the third quarter, which is tied for sixth. … Austin Ekeler is tied for second in the NFL among running backs with eight scrimmage touchdowns. He has also gone over 100 scrimmage yards in five games. … WR Keenan Allen is tied for fifth in the AFC with 45 receptions. He is also 31 catches away from reaching 700 in his career. … WR Mike Williams is tied for second in the AFC with six touchdown catches. … S Derwin James Jr. leads NFL defensive backs with 63 tackles. He also has three forced fumbles, becoming the first Chargers player to do that in the first seven games since Marcellus Wiley in 2001. ... Eagles are 0-3 at home. ... Eagles coach Nick Sirianni was an assistant with the Chargers from 2013-17. ... Eagles offensive coordinator Shane Steichen was the Chargers’ OC last season and spent nine of his 10 seasons in the NFL with them. ... The Eagles had 236 yards rushing and four touchdowns last week, added six sacks for the first time since getting nine against Miami on Dec. 11, 2011. ... Philly is one of four teams to win multiple games by at least a 24-point margin. ... The Eagles own the fourth-best red zone offense in the NFL, scoring TDs on 21 of 29 (72.4%) opportunities inside the 20. ... Eagles QB Jalen Hurts ranks eighth in the NFL in total offense with 2,152 yards. ... Eagles DT Javon Hargrave has six sacks, one shy of a career high and tied for most by an interior linemen.

FANTASY TIP: Ekeler is a solid bet for a productive day against a defense that struggles against the run and has weak linebackers.