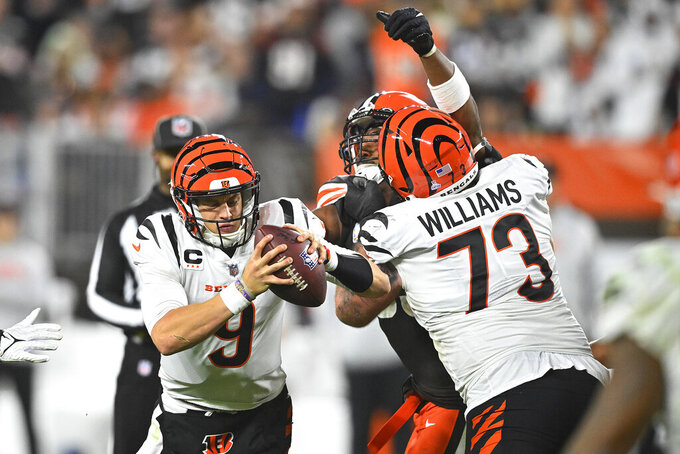 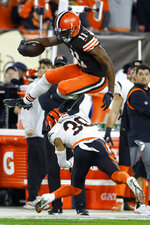 CLEVELAND (AP) — For the first time this season, the Cleveland Browns put it all together and played like a complete team — offense, defense special teams.

“It was one of those days where we imposed our will,” quarterback Jacoby Brissett said.

Garrett, who came to FirstEnergy Stadium wearing a Halloween costume, led a fired-up defense that sacked Burrow five times and held the Bengals (4-4) to 229 total yards — 100 in the first half.

“Myles was very good,” Browns coach Kevin Stefanki said with a smile. “He does what No. 95 does. He was playing dominant out there. He is very difficult for people to block one on one. He gets a ton of attention, and when that happens, others are getting one on ones.”

Burrow has already been to the Super Bowl in just three NFL seasons. However, the Ohio native has yet to beat Cleveland, dropping to 0-4 in four career starts against Cincinnati's AFC North rival.

The Browns (3-5) ended a four-game losing streak, and in the process saved their season from slipping away as they try to stay competitive while awaiting quarterback Deshaun Watson's return from an 11-game suspension.

Garrett was pleased with the performance, but as the Browns head into their bye, he stressed it won't mean anything without another one like it.

“It has to be routine. It has to be the standard,” he said. "We have to make sure that everything we did leading up to this game is the same the week after this one. We wave what it takes. We have taken our lumps, but we will show what we have and our dedication to the game and what it takes to get wins in this league because they don’t come easily.

"Right now, to get a win like this, and in a dominant fashion, it is showing the guys how good we can really be.”

Brissett ran for a TD and passed for another, leading Cleveland to its fifth straight win over Cincinnati. He completed 17 of 22 for 278 yards and a career-high 133.7 rating while outplaying Burrow.

Chubb scored on runs of 3 and 11 yards, and Brissett added a 3-yard TD run and connected with Amari Cooper on a 4-yard pass in the second half as the Browns built a 25-0 lead while playing their best all-around game in 2022.

“The game was 25-0 before you even know it," Bengals coach Zac Taylor said. "We just didn’t come back. The worst thing to do against the Cleveland Browns is to give them a two, three score lead with their running game and their pass rush.”

Led by Garrett, Cleveland's defense, which has struggled for most of the season, put relentless pressure on Burrow, who was without top receiver Ja'Marr Chase because of a hip injury.

However, even a healthy Chase may not have been enough to help Burrow. He finished 25 of 35 for 232 yards with two TDs and one interception.

“He's one of the elite of the elite in the game,” Burrow said of Garrett, who finished with 1 1'2 sacks. “He's always going to make plays like he did tonight.”

Burrow connected on scoring passes in the fourth quarter to Tyler Boyd and Tee Higgins, but those only helped him pad his stats and took some sting out of the scoreboard.

Garrett set the tone for a scary performance for the Browns by dressing up as Vecna, the sinister alien-like character from the TV series “Stranger Things.” This was indeed a strange night as the Browns finally looked like a competent team and recorded a lopsided win after so many close losses.

“We expect him to set the tone for us,” Brissett said of Garrett. “He will come up and tell you that he fed off of a lot of those other guys. There were not a lot of places for them to throw the ball tonight, and that was because of the back end but also because of the front end.”

It was Cleveland's second blowout of Cincinnati in the past two years. The Browns thumped the Bengals 41-6 in their first meeting last year.

“They’ve had our number the last couple of years,” Burrow said. "They always play well against us, they have real good players in defense and are really well coached.”

Cincinnati did not allow a second-half touchdown in its first seven games before the Browns scored three TDs after halftime.

With the trade deadline Tuesday, Browns running back Kareem Hunt has been involved in rumors for weeks. The chatter about his future began when he demanded to be dealt in August after the team failed to offer him a contract extension.

Former Browns cornerback Joe Haden served as the honorary game captain. He signed a one-day contract to officially retire with Cleveland, which drafted him in the first round in 2010. Haden was a two-time Pro Bowler during seven seasons with the Browns before playing for rival Pittsburgh.

Browns: RT Jack Conklin went to the locker room late in the first half with an undisclosed injury, but returned after halftime.