Colts hoping to get prime-time advantage against Jets 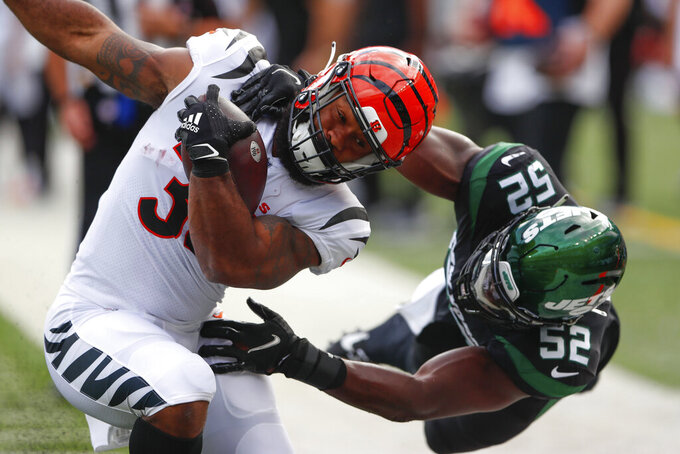 OPENING LINE: Colts by 10 1/2, according to FanDuel SportsBook.

TURNOVER DIFFERENTIAL: Jets minus-10 ; Colts plus-8.

JETS PLAYER TO WATCH: QB Mike White. Little known to most casual fans before last week, White's impressive showing against Cincinnati made him the talk of the town. Zach Wilson’s backup threw for 405 yards and three touchdowns in his first NFL start and caught a 2-point conversion pass on the go-ahead score. Wilson is still out with a sprained knee ligament, so White is getting a chance to show his big game was no fluke.

COLTS PLAYER TO WATCH: QB Carson Wentz had been remarkably efficient through nearly eight full games. Then he gave away 10 points in the final 7 1/2 minutes of Sunday's overtime loss. While Wentz insists he's leaving the ill-fated finish in the past, everyone will be looking to see how Wentz rebounds — or whether he may revert to his turnover-prone ways of last season with Philadelphia.

KEY INJURIES: In addition to Wilson, WR Corey Davis is expected to be a game-time decision after missing the Bengals game with a hip injury. LT George Fant’s status also is uncertain because of an ankle injury. RB Tevin Coleman (hamstring) will likely miss his third straight game. ... Colts coach Frank Reich already has ruled out four-time Pro Bowl receiver T.Y. Hilton (concussion). The other big question is starting safety Khari Willis who didn't practice Monday or Tuesday because of a calf injury.

SERIES NOTES: Indy has won two of the last three since ending a three-game skid against the Jets. ... These teams squared off twice a year as members of the AFC East from 1970-2001. ... New York has won three of four postseason matchups, with the only loss coming in the 2009 AFC championship game. ... The Jets pulled off a historic upset in the first contest — delivering on Joe Namath's guaranteed victory in the third Super Bowl.

STATS AND STUFF: White is the first NFL player to top 300 yards passing and complete 75% of his throws in his starting debut; the first to throw for 400 yards and three TDs; and only the second since 1950 (Cam Newton, 2011) to reach 400 yards in his first start. ... Jets RB Michael Carter had 172 yards from scrimmage last week, the most by an NFL rookie this season. He's had two straight games with 100 yards from scrimmage. ... WR Jamison Crowder has caught at least five passes in five consecutive games. ...New York and Atlanta are the only NFL teams to score on every red-zone possession. The Jets have 11 TDs and eight field goals after going 6 for 6 against the Bengals. ... Last week's game was the Jets' top offensive performance this season. They had 32 first downs, third most in franchise history, and the most since posting a franchise-record 39 in a 38-34 win over Miami on Nov. 27, 1988. ... Indy is playing its first prime-time home game since December 2017. ... Wentz has thrown at least two TD passes in five consecutive games and won his only career start against the Jets in 2019. ... With 2 yards rushing, Taylor will pass Alan Ameche (1,819) for the fourth-highest total by a Colts player in his first two seasons. Taylor also needs 118 yards from scrimmage to reach 2,000 in his career. ... Two-time All-Pro LB Darius Leonard needs nine tackles to pass Robert Mathis (478) for sixth on the franchise's career list. His 23 games with 10 or more tackles are tied with Gary Brackett for the most by a Colt since 1987. ... The Colts and Buffalo share the league lead for takeaways (18).

FANTASY TIP: Taylor should be the pick. The league's second-leading rusher has totaled 100 yards from scrimmage and scored a TD in five consecutive games. Both are the longest active streaks in the league. He's rushed for 100 yards three times this season and averages 5.4 yards per carry.