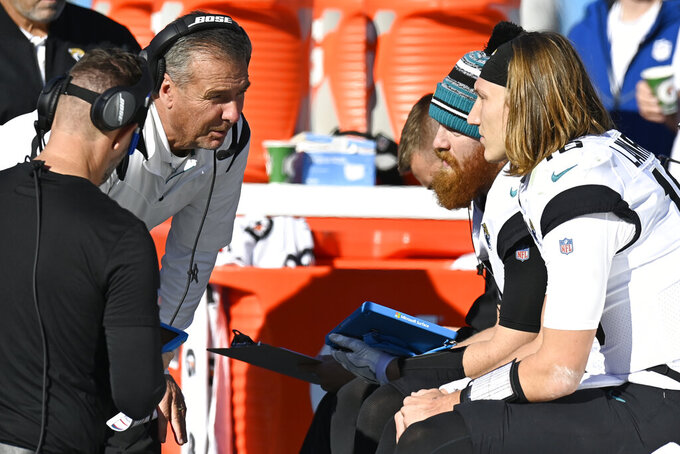 There’s a dozen good reasons why college coaches rarely make a successful jump to the NFL. Leave it to Urban Meyer to trip over the dumbest one.

After 13 games packed with more missteps than a Master P appearance on “Dancing With the Stars,” Meyer was still treating grown men like kids, still behaving like he was the king on a campus somewhere. Still sloganeering, blustering at some and blaming everybody else at the drop of a pass. But there’s a reason bullies run out of rope a lot faster in the pros. It’s because the guys holding onto the other end have contracts, too.

In that sense, Meyer’s firing hardly qualifies as a surprise. And it hardly matters whether the final straw was the report in a Florida newspaper about Meyer kicking a former kicker in disgust back in training camp last August. Jaguars owner Shad Khan had so many gaffes to choose from that the statement he released Thursday — “an immediate change is imperative for everyone” — could have been written shortly after his coach got caught grinding in a bar in late September.

Or anytime last month, when Meyer’s offense was wheezing out an average of less than 10 points a game en route to losing five in a row. Or just this past Monday, for that matter, when a reporter asked Meyer whether safety Andre Cisco would get more playing time.

“Cisco is playing a little bit more, I believe,” he said. “I don’t have his numbers in front of me.”

Since Meyer hadn’t bothered to look, here they are: Cisco recorded exactly zero plays on defense in an embarrassing 20-0 loss at Tennessee a day earlier.

Rather than mull over why Meyer’s NFL tenure was the fastest flameout since that other paragon of virtue, Bobby Petrino, walked out on the Falcons in 2007, here’s a better question: How was Meyer so successful for so long in the college game pulling a lot of the same shenanigans?

We know he was slapping motivational signs all over Jaguars’ facility, as he had at all his other stops, because his former players tore them down shortly after news of Meyer’s firing reached the place. We know he arguing with players and berating his assistants as “losers” in Jacksonville, because those happened out in the open. What’s the chance the 57-year-old Meyer only developed those nasty habits late in life?

Now, to be fair, someone who wins three national championships and builds success at every school he's coached doesn’t lack for talent or brains. Early on in his career, the 57-year-old Meyer displayed plenty of both, and his recruiting skills throughout took a backseat perhaps only to the devil himself.

At Bowling Green (2001-02) and Utah (2003-04), Meyer was a pioneer and loud advocate for the spread offense that opened up the college game and caught on with a few of his influential NFL brethren (think Chiefs coach Andy Reid). To Florida (2005-10), he brought intensity and an attention to detail that few of his college counterparts could match. At Ohio State (2012-18), he became more a CEO than a coach, letting assistants handle most of the on-field scheming while he made sure the program’s advantages — more money, bigger staffs and better facilities – continued to pull in the best recruits.

Winning, though, wasn’t the only thing that marked Meyer’s college years. Those last two stops produced national championships, but way too much drama. At Florida, 31 of his players were arrested during his five years there. At Ohio State, he was put on paid administrative leave after claiming he was unaware that Buckeyes receivers coach Zach Smith, who was arrested on a domestic-abuse charge in 2009 while an assistant on Meyer’s Florida staff, was alleged to have committed the same abuse again in 2015.

Harbaugh, a rival, may have to revise that first part, but the second part still stands. When Khan lured Meyer out of the broadcast booth with a more-than-generous offer to rebuild the Jaguars with a franchise quarterback, Trevor Lawrence, fresh out of the draft, both men should have known what they were getting.

We can attribute Khan being “bitterly disappointed” – as his statement put it – to naivete. He apparently focused on what Meyer had accomplished without delving too deep into how.

But Meyer forgot, or figured it didn’t matter, that he wouldn’t get to pick his own players and yell, threaten and apparently even kick them whenever his mood soured. The men he found in the Jacksonville locker room on arrival didn’t need empty slogans or reality-TV drama to motivate them. The fact that they made it to the NFL was plenty proof of that.

Once they figured out he didn’t have anything to teach them, accountability was no longer a one-way street.